Keto Diet Foods: What to Avoid and What to Eat

Making the shift to a keto diet can feel extreme, but when you know some basic food swaps, your meal planning will get easier.

Making the shift to a keto diet can feel extreme, but when you know some basic food swaps, your meal planning will get easier.

Keto recipes abound on the internet, but what better way to get comfortable in your keto kitchen than with these 12 common keto food swaps?

While all ketogenic diets revolve around minimized carbs, actual daily carb intakes will vary based on activity level, sex, and age. Knowing keto swaps that replace high-carb ingredients can be the key to successfully customizing your personal carb intake levels.

1. Instead of White Rice, Use Cauliflower Rice 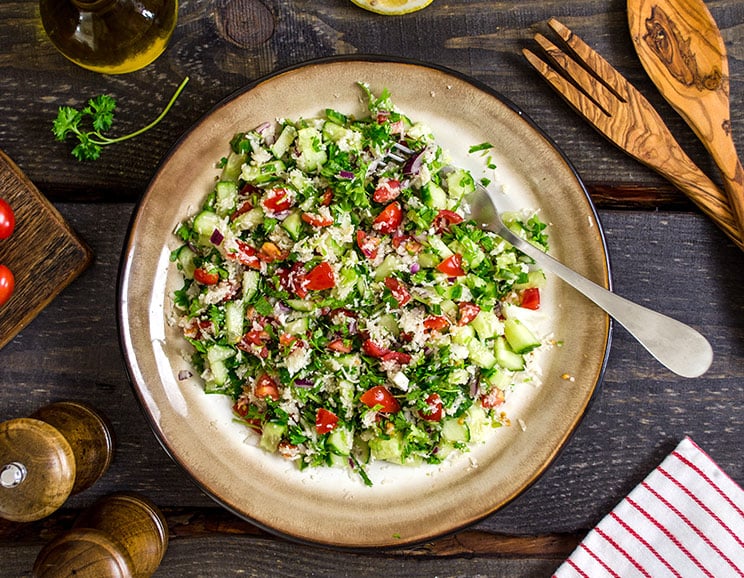 Cauliflower is a low-carb, non-starchy cruciferous vegetable that is the darling of the keto world.
While white rice is off limits on both a Paleo and keto diet, cauliflower makes for an excellent, healthier alternative. You can easily enjoy cauliflower rice in dishes like shrimp fried cauliflower rice, Spanish cauliflower pilaf, and mushroom risotto.

You’ll also find that you can add cauliflower to nearly every keto dish thanks to its ability to blend into every flavor and texture that exists. It’s versatile and adds the feeling of plenty of carbs without killing macros. Cauliflower can be used to make keto breads, “noatmeal,” pancakes, desserts, and anything else that typically uses flour.

2. Instead of Pasta, Use Spiralized Zucchini 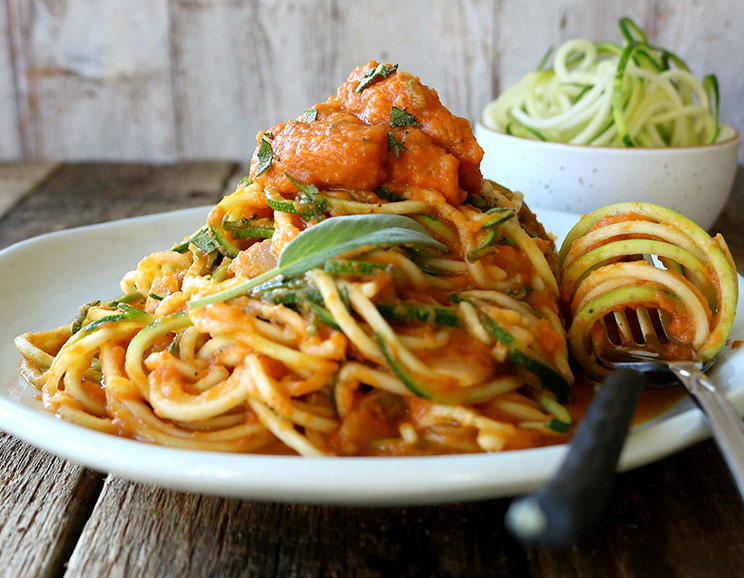 This low carb veggie from the squash family has a mild enough flavor to make it the perfect base for many meals. When shredded or spiralized, it can stand in for pasta, but it can also be used to make fritters, chips, casseroles, and even used in hash or skillet dishes. Since zucchini is so low in carbs, you can indulge in a lot of it in one meal without feeling like you’re getting the short end of the serving stick.

3. Instead of Grain Flours, Use Coconut Flour 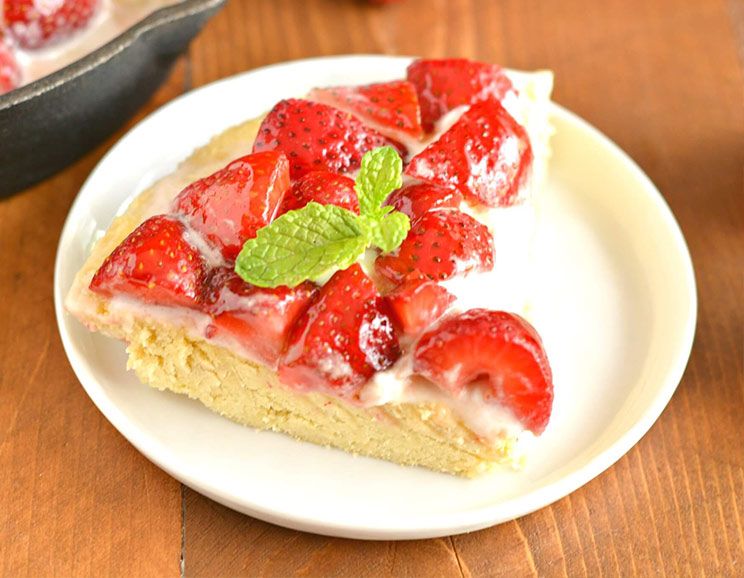 While coconut flour doesn’t swap one-for-one with grain flours, it can be used to create some deliciously fluffy keto bread, along with other keto swaps, like brownies, cupcakes, muffins, and more. Coconut flour needs a lot more moisture than other flours since it’s so dense, so you’ll often see it paired with eggs, ghee, and even Paleo mayonnaise. 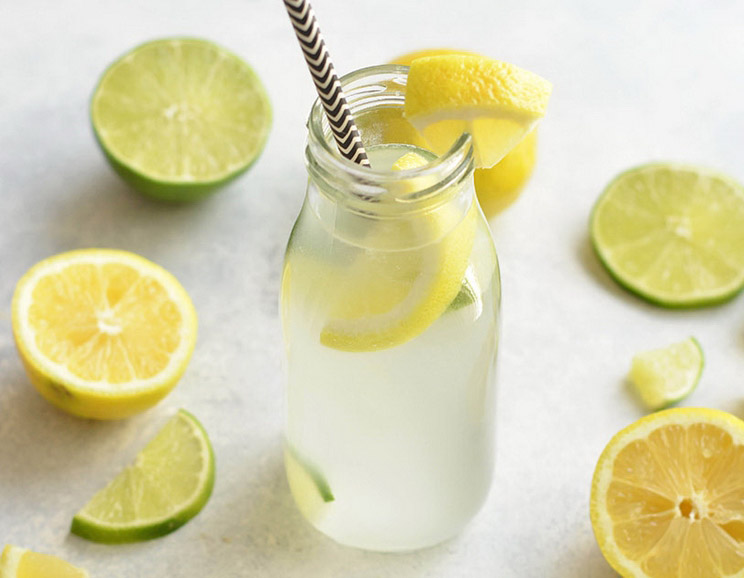 While soda is off limits on both a Paleo and keto diet, you can easily swap in infused sparkling water. You’ll get the same bubbly drink, but instead of sugary sodas, flavor it with healthy ingredients like sliced cucumbers or lemons. Staying hydrated is important so that food is properly converted to ketones, so you’ll want to drink plenty of purified water.

5. Instead of Grain Buns, Use Avocado Buns 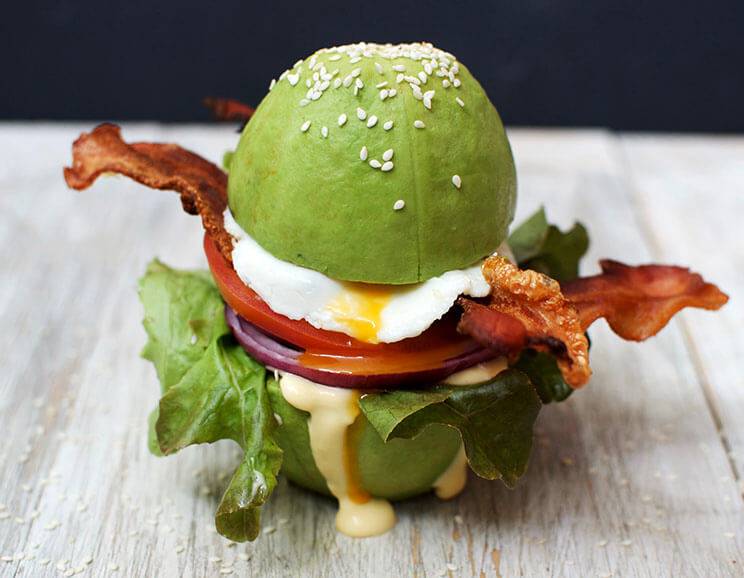 Rich, juicy hamburgers aren’t off the table for keto, but the typical bun certainly is. Luckily, a keto burger with avocado halves for buns is a fat-bomb meal that is not only satisfying, but will fill you up without needing too many carbs to round out the meal. This one is kind of messy, so you may need a fork! This meal is perfect for breakfast, lunch, or dinner, and you can customize other favorite add-ons like a fried egg, bacon, or even keto hash made with zucchini.

6. Instead of Hummus, Blend Avocado and Cauliflower 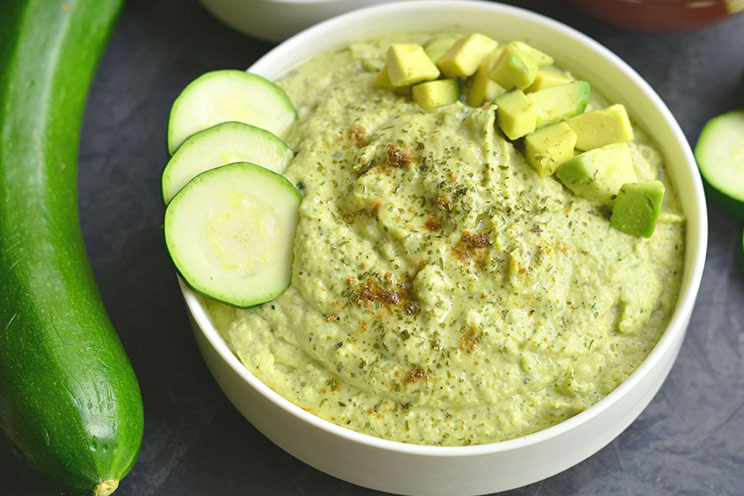 Unfortunately, traditional hummus made with chickpeas isn’t Paleo, and Paleo-friendly versions made with cashews are too high in carbs for most keto dieters. Avocados can, of course, be used for making guacamole, but this versatile dip base can be used for more than just guacamole.

Mashed avocado can be paired with puréed cauliflower to make a delicious hummus-like dip perfect for pairing with celery, raw cauliflower and broccoli, and other keto chip alternatives.

7. Instead of Potato Chips, Eat Tomato Chips (and Bacon Chips, Too!) 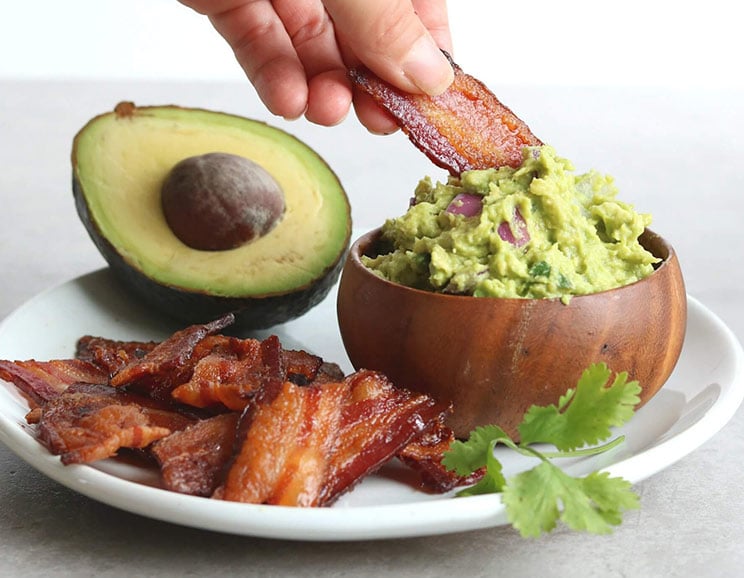 Potato chips (and that includes sweet potatoes, too) are a no-go on a keto diet, but that doesn’t mean you can’t have something crunchy to much on.

Tomatoes are low-carb veggies that can make addictively delicious chips both for dipping and for eating on their own. (It’s super easy to make your own tomato chips at home!) Zucchini works as easy, keto veggie chips, too!

Perhaps the most delightful keto chip option, however, is bacon – seriously. Swap tortilla chips with crispy bacon chips then dip them in chunky guac as the ultimate keto snack.

8. Instead of Sugar, Use Stevia 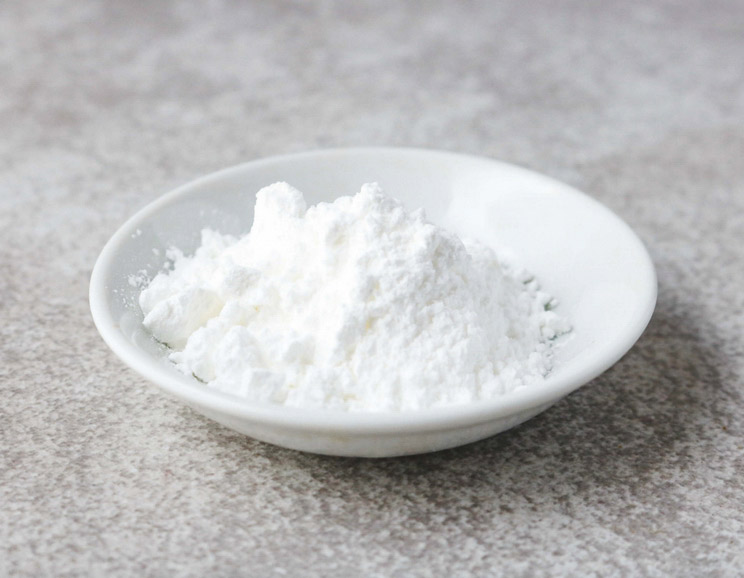 Sugar is a definitely no-go on a keto diet, even the basic Paleo-friendly ones like maple syrup, raw honey, and coconut sugar can only be used in limited amounts.

Stevia, however, is a Paleo-accepted sweetener that is not artificial and which does not have any carbs, making it the perfect option for keto recipes.

Pure stevia comes in powdered and liquid form, and liquid tends to blend best when cooking or baking and dissolves faster in beverages. Many powdered stevias also tend to contain anti-caking agents or other ingredients that can jeopardize their Paleo and keto status.

When used in large amounts, stevia can be quite bitter, and you’ll only need a few drops to sweeten up your recipes.

Important note: Stevia doesn’t swap one-for-one for sugar or even other keto sweeteners that aren’t Paleo friendly, like erythritol or Swerve. It’s best to find a recipe that uses stevia to begin with, but generally, stevia can be swapped for other sweeteners by replacing one cup of sugar, coconut sugar, or maple syrup with one teaspoon of liquid stevia. This may mean that you need to add extra liquid to the recipe to make up for the difference, so it can be a bit of an experiment. Additionally, if you’re not used to eating a lot of sugar, you may find that the taste of one teaspoon of stevia is overly sweet, so if it’s your first time using stevia, opt for less.

9. Instead of Cereal, Eat Chia Pudding 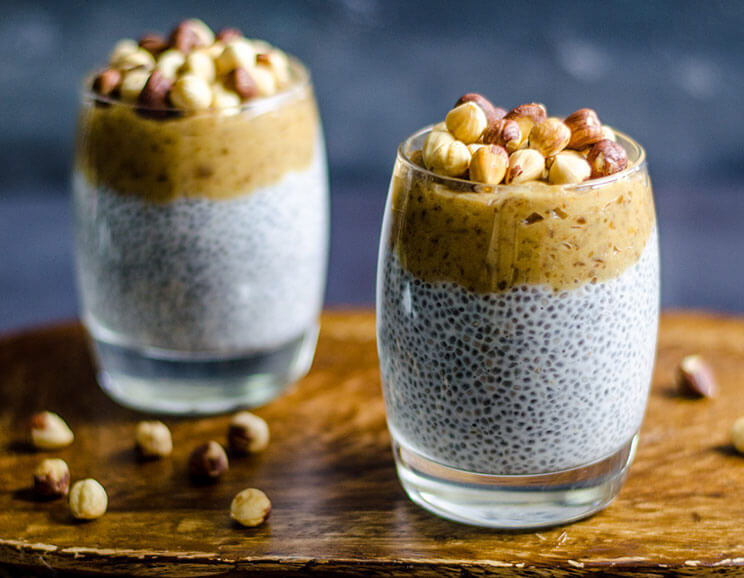 Rather than filling your bowl with gut-wrecking grains and processed sugars, opt for a simple, nourishing chia pudding instead. Filled with omega-3’s, antioxidants and fiber, chia seeds are a delicious way to keep your heart healthy and stay in ketosis.

10. Instead of Oatmeal, Eat Cauliflower Oats 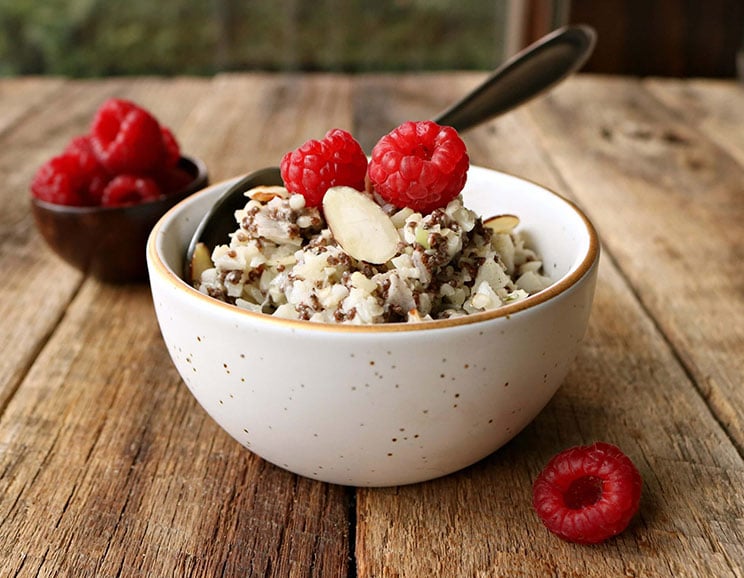 If you want the filling flavor of oatmeal, without the inflammatory effects, swap regular oats with riced cauliflower. When mixed with chia seeds, hemp hearts, and coconut milk, this keto-friendly veggie takes on the same chewy texture of oats – making for a warm bowl of low carb NOatmeal. 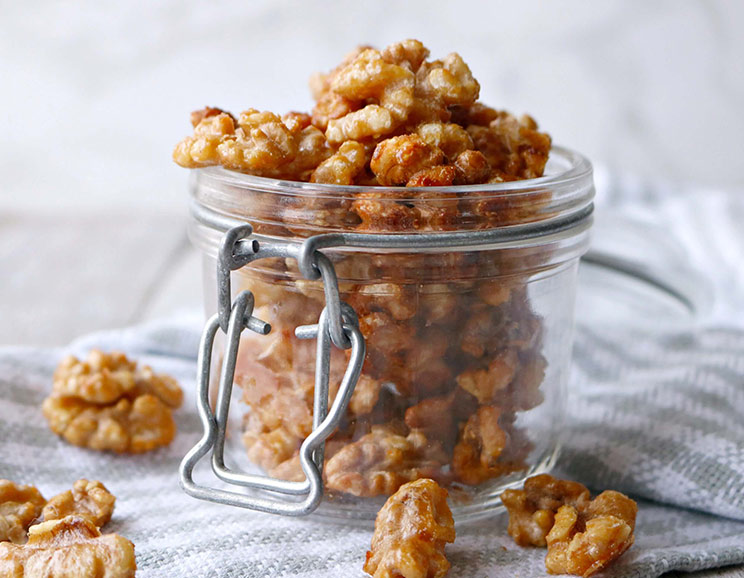 While nuts are packed with healthy fats, helping you stay fuller for longer, you’ll need to be careful about which you snack on if you’re on the keto diet. Although nuts are low in carbs when eaten in moderation, it’s easy to go overboard if you snack on them regularly. To stay on the safe side, avoid nuts that are higher in carbs, like cashews and pistachios, and stick to low carb nuts like macadamia, pecans, and walnuts. 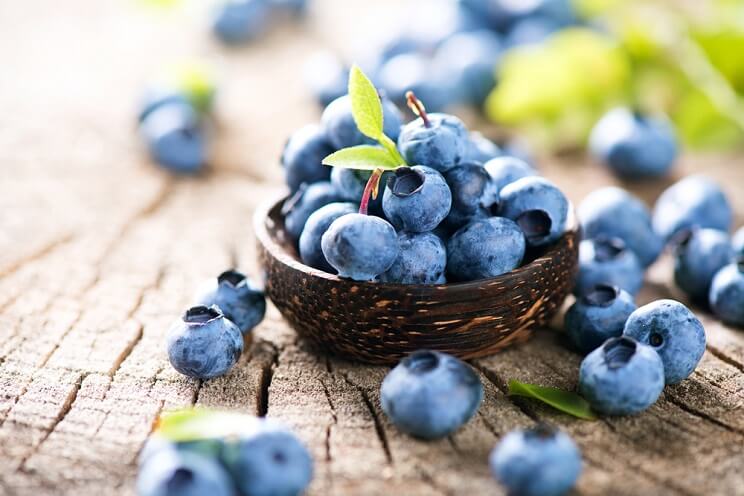 Although fruits are great on a regular Paleo diet, if you’re trying to achieve ketosis, you’ll want to stay away from most of them since they tend to be high in carbs and sugar. Instead, opt for berries and avocados (yes, they’re a fruit), which are OK to eat thanks to their low carb count.

(Read This Next: 23 Keto-Friendly Snacks)