Instant Pot vs. Slow Cooker – the Difference and Which is Better

While the pressure cooker has been around since the 1600s, the instant pot, though considered a pressure cooker, is incomparable to its predecessor. The basic version of the Instant Pot has seven different functions, and several other versions offer even more.

There’s been a lot of hype about the Instant Pot for the past few years, and you’re probably wondering if your counter space is worth another appliance. If you already own a slow cooker, then you might wonder why you would want two appliances that perform the same functions. While they are similar, there are some major differences between Instant Pots and slow cookers.

The reason most people own a slow cooker or an Instant Pot is to save time. They are both perfect for busy people that still want a healthy meal. Throwing food into their slow cooker at the beginning of the day has saved many people money and their waistlines. The slow cooker is great because it can slowly cook meat into tenderness and soften hard root vegetables throughout the day. However, the difference with the Instant Pot is if you don’t wake up in time to toss your ingredients in your slow cooker you can still cook your food when you get home. An entire meal can be made in 30-60 minutes. The slow cooker almost always needs to cook anywhere from 4-10 hours.

With the Instant Pot you can cook dry beans in 30 minutes, raw meat in 8 minutes per pound, and potatoes in under 15 minutes. Food can be put in the Instant Pot at the beginning of the day with a timer set for a specific start time so your food can be fresh, hot, and ready to serve as soon as you walk in the door. Running late in the morning? With the Instant Pot, you can cook your dinner in one hour or less (depending on the recipe). Keep in mind, the instant pot has to build up pressure, then the cook time starts, once it has finished cooking it has to depressurize. It takes 5-15 minutes to build up pressure and about 5-30 minutes for a natural release. So always add 15-30 minutes to your cook time on your recipes.

One of the best reasons to have a slow cooker or an Instant Pot is to avoid drive-through restaurants and keep dinner in your home. Everyone has those hectic days where dinner is the last thing on their mind. That is until they get home, it’s dinnertime and they’re hungry. Fast food restaurants should not be the go-to meal for a busy day. Those quick $10-$20 meals add up by the end of the month. If you’re on a budget or trying to save money, it might be hard to make the initial payment of $20-$110 for a slow cooker or the $80-$100 for an Instant Pot, but eventually, the fast-food runs will stop and the savings will begin.

If you’re on a special diet, there are thousands of cookbooks and recipes available for both slow cookers and Instant Pots. Whether you need gluten-free, Keto, Paleo, Vegan, or Atkins there is a recipe available. A lot of restaurants don’t offer menus for special diets that are critical to so many people’s health. These two appliances help accommodate both your budget and your diet.

Are these appliances worth my counter/cabinet space? If you’re living in a small home this is a critical question. The slow cooker is perfect for a busy lifestyle, but if you’re the type who has the time and energy to come home and cook then it might not be something you need. The instant pot has the functions of a slow cooker, but can be considered a space saver because even the basic model has seven functions: slow cooker, electric pressure cooker, yogurt maker, rice cooker, steamer, warmer, and sauté pan. That’s just the basic model. Some models also offer options to bake, roast, broil, dehydrate, air fry, and broil. With all these functions, owning an instant pot could potentially make the rice maker, slow cooker, yogurt cooker, and steamer obsolete from your kitchen. That would save a lot of kitchen space! If you aren’t using these appliances already, then owning the instant pot might have you making new creations you never would have thought to try before.

The slow cooker offers several different sizes from a two-quart to a ten-quart, while the Instant Pot only offers three, six, eight, and ten-quart pots. The slow cooker has smaller sizes that are perfect for keeping dips warm at a party, which an instant pot does not offer. What the instant pot is lacking in size versatility it more than makes up for in accessories. The slow cooker doesn’t have much outside of a springform pan and a roasting rack as far as extras are concerned. With the Instant Pot, you can purchase egg racks, springform pans, steamer baskets, cake pans, and much more. The Instant Pot also has a variety of cooking options that the slow cooker does not, making it perfect for the pioneer in the kitchen.

Flavor is never a concern when cooking with the Instant Pot or the slow cooker. Food slowly simmers and marinates all day in a slow cooker, making for some fantastic flavor. While you can take the lid off to stir or add extra food and seasoning into the slow cooker, this cannot be done with the Instant Pot. Since it is a pressure cooker, the pot has to build up pressure to cook the food. The lid cannot be taken off until the pot has been depressurized. There will be no adding or stirring once the instant pot has been set to cook. Because of this safety feature, many people believe that the Instant Pot creates more flavorful meals since the lid has locked in the flavor. The myriad of flavors don’t go wafting out, it stays in the pot, immersing itself back into the food.

The slow cooker can be set and cooking all day and there’s no need to fret about it burning down the house. You would never leave the oven or stovetop on before leaving, but the slow cooker is safe and reliable. Once the cook time has been reached it will switch over to warming mode. Some people look at the instant pot with trepidation. Horror stories of pressure cookers being opened before pressure was released and an explosion ensuing, but the Instant Pot isn’t the pressure cooker your mother used. Ten safety features are installed to keep you and your home safe. It is still best to practice caution when using your Instant Pot, so remember to never put your face over the float valve or the steam release valve. You also never want to open the lid until all the pressure has been released (when the float valve has dropped down). It’s always best to read the owner’s manual with any appliance, but that especially rings true with the instant pot and its many components.

Comparing the Instant Pot and the slow cooker is almost like comparing apples and oranges, they might both be considered fruits, but the comparison doesn’t go much beyond that. A slow cooker is a timeless appliance that gets the job done with ease. It saves time, cooks a great tasting meal, and is an easy cleanup. If you are wanting to cook more beyond soups, meat, and dips, then you might want to go for the new and improved electric pressure cooker. The Instant Pot is not just a slow cooker or pressure cooker, but a multi-use tool in the kitchen. It’s not just for the busy person, but the innovator in the kitchen. 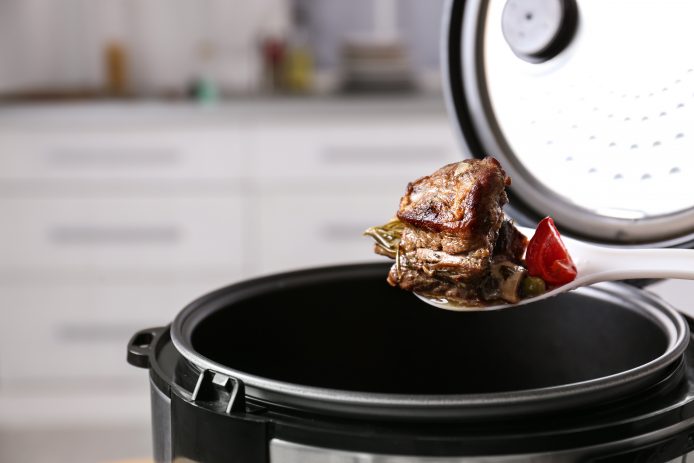 To recap, here is a rundown of the features of the instant pot:

– Offers a delay start timer of up to 24 hours

– Several appliances in one

If saving money, easy meals, and a healthier diet all sound appealing to you, then a slow cooker or Instant Pot are exactly what your kitchen needs. If your next concern is what to cook, then you’re in the right place!

Eating healthy can be intimidating. It sounds overwhelming to buy the right ingredients, to know exactly what to use and how long to cook it, and don’t forget about serving size and nutritional facts. Finding the right cookbook is critical to keeping you on track with your diet.

The Keto Slow Cooker Cookbook and The Keto Instant Pot Cookbook are perfect for keeping you on track with a healthy diet, giving you quick and easy meal ideas, and healthy alternatives. They will tell you exactly what you need to put on your grocery list, the nutritional facts of every recipe, and of course provide you with mouth watering recipes. The Keto Slow Cooker Cookbook and Keto Instant Pot Cookbook will have you excited to get back in the kitchen and ready to start a new, healthier lifestyle!

7 Nut-Free Paleo Flour Alternatives
Next Post: COVID-19 Vaccine Update (9+ Things You Should Know Before Getting Vaccinated)