This easy Slow-Cooked Apple Cider will have your whole house smelling like spiced apples. Great for parties or for cozying up to someone on a chilly night.

No holiday party is complete without a festive drink to sip on. Apple cider is a timeless beverage, which is amazing whether it’s served hot or iced. This recipe infuses fresh cloves and cinnamon into the cider—as the apples and orange cook down and release their flavor.

First, fill your slow cooker with water, and turn to low heat. Get around 9 or 10 apples (along with 1 orange) ready by cutting them in half. The orange adds a hint of citrus brightness to the cider. No need to peel fruit or remove the seeds; they’ll be strained out later. 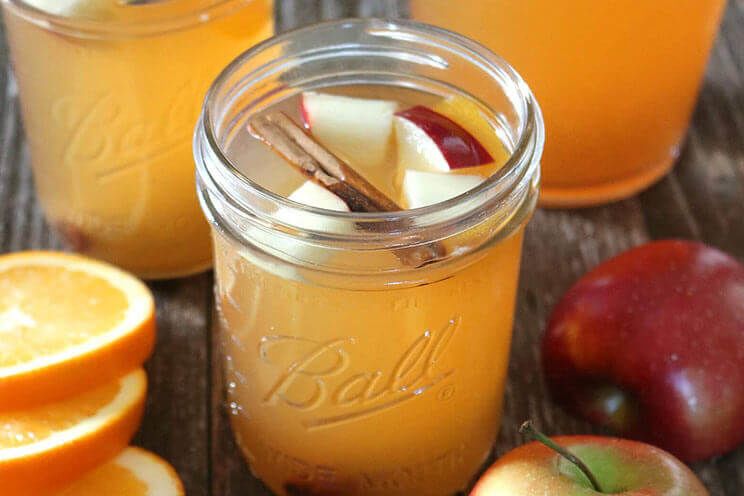 Next, add in the cloves, cinnamon, coconut sugar, and nutmeg. These spices are responsible for the aroma of the cider. They give it that baked-apple goodness. From there, just let the flavors marry, and slowly cook.

About six hours into the cooking process, the apples should be very soft. Take a large spoon or potato masher, and mash the apples until they’re mushy. Return the lid and cook for one more hour. Turn the heat off and remove the orange halves.

Using a ladle, scoop out the mixture over a strainer and into a pitcher. This part can be a little messy, so I recommend straining over the sink. To release any extra cider that may get stuck in the mushy apples, use the ladle to press down the mixture into the strainer. Discard the mashed apples as your strainer fills up.

Return the apple cider to the slow cooker, and leave it on the “serve” setting to keep it hot for guests. You can also store it in a pitcher in the refrigerator, and serve the cider chilled.

Jennafer Ashley
This easy Slow-Cooked Apple Cider will have your whole house smelling like spiced apples. Great for parties or for cozying up to someone on a chilly night.

Tip: Use any leftover cider in these Paleo recipes: