As an alternative to wheat flour, banana flour can be used to make gluten-free, Paleo-friendly baked goods (and other recipes). But is this option actually better and healthier? Below, we explore the pros and cons of banana flour.

Banana flour is exactly what it sounds like: bananas milled into powder form.

You can use it in any situation where you’d use flour: baking Paleo-friendly treats, making baby food, and thickening soups, sauces, and smoothies.

Banana flour is a novel concept for many who live in Europe or North America. But it actually has an extensive history in other parts of the world. In places where different varieties of green bananas grow (such as South America, the Caribbean, Southeast Asia, and parts of Africa), locals have ground banana flour for centuries.

Did you notice I said green bananas? That’s because typical yellow bananas don’t work well in flour form. They’re sweeter and stickier than green bananas, so it’s difficult to mill them into a workable powder without adding chemicals like maltodextrin (a white powder made from corn, wheat, or other starches) (1).

On the other hand, green bananas are starchier and less sweet, so they’re ideal as a wheat-flour alternative. Once dried, the flour from green bananas actually has a beige color. It’s lighter and fluffier than almond or coconut flour.

You’re probably thinking that the banana taste would be overwhelming, but it’s actually very subtle. It has a light, nutty, earthy flavor that blends well with other ingredients (especially when making baked goods).

As the Paleo movement matures, there will be no shortage of innovative new foods and ingredients.

Banana flour is one of those hot trends. While there are only a limited number of commercial suppliers right now, the demand is certainly there. Even the Australian Defence Force is experimenting with it to make energy bars for their soldiers (2)!

As with most trendy things, expect to see a whole lot more banana-flour businesses (and recipes) pop up over the next few years. But when I dug into the research, I was happy to discover that there are plenty of legitimate reasons that make it a trend worth hopping on.

Here are some of the most important benefits: 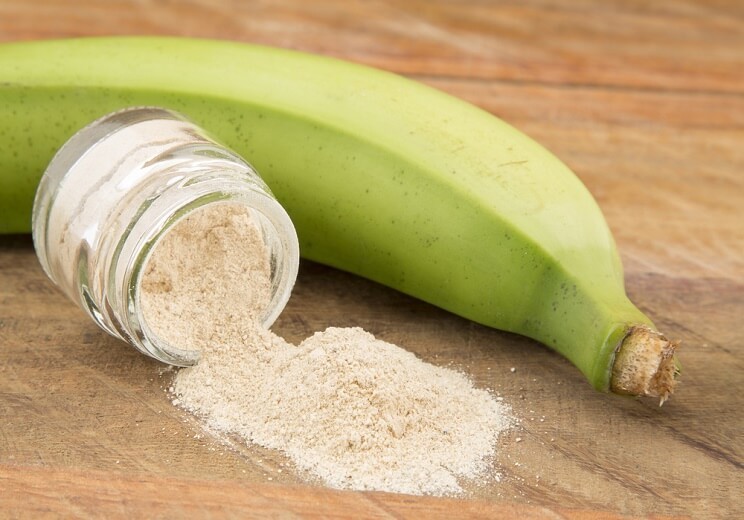 It’s rich in potassium, which reduces blood pressure, decreases the risk of stroke, and maintains proper heart health (among other things) (3). It’s also high in magnesium, which is involved in over 600 reactions in the body (including forming proteins, converting food to energy, and controlling muscle movements and the nervous system) (4).

In addition to the nutrients and low-calorie content, you can also use less banana flour than you’d use with wheat flour. It might take some experimentation to get your recipes just right, but the general rule of thumb is that you can use about 25% less banana flour to prepare the same amount of food.

This news is all encouraging if you want to cheat a little and enjoy some of your favorite Paleo treats— without completely sidelining your diet. You get the nice one-two punch of:

Banana flour doesn’t contain gluten, so most of us with intolerance (or even Celiac disease) can consume it without any issues (6).

This is huge news. Many of us grew up eating gluten without ever realizing we had an intolerance. If we only had moderate issues (for instance, poor digestion), they might’ve been invisible to us because they were all we knew as “normal.” People are often shocked when they go gluten-free and notice how much their digestion, mood, and energy improves (7).

With banana flour, you don’t have to worry about any of that. You get something that acts like wheat flour—without all the harmful side effects. [tweet_quote] Banana flour is grain-free, and they process quickly in the body.[/tweet_quote]

Banana flour is also good because it doesn’t come from a grain. We Paleos avoid grains because they’re less nutritious than other options. They also process extremely quickly in the body and contain anti-nutrients (such as lectins and phytates) (8).

Bottom line: opting for banana flour helps you enjoy Paleo treats and baked goods, while minimizing your risk for developing any health issues. 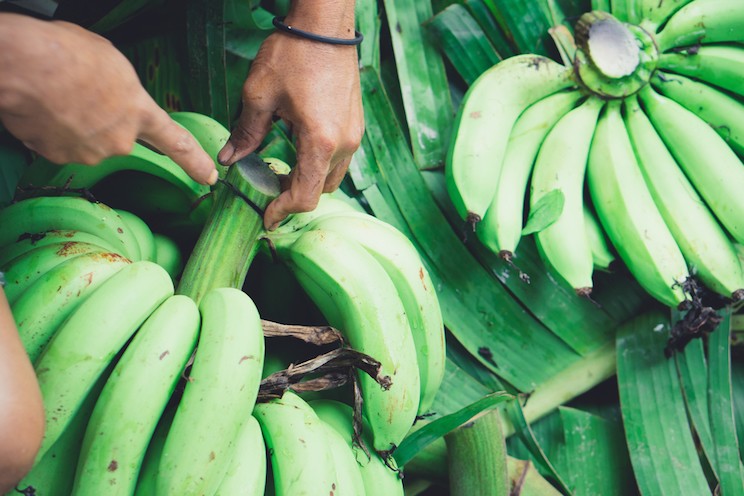 Remember when I mentioned how green bananas are a lot starchier than their yellow counterparts? This property doesn’t just make them suitable sources for flour. It also makes them nutritious.

The type of starch matters. When most of us think of starches, we think of foods that are basically pure carbohydrates and are rapidly processed in the body (such as rice and potatoes).

The end result is pretty much the opposite effect than the one you’d experience from eating typical starches. Instead of seeing a spike in blood sugar and a significant insulin response, resistant starches are slowly processed and have more moderate effects (10).

So resistant starch is super for blood sugar control. A study published in the journal Food Chemistry compared wheat pasta to pasta made from banana flour. It found that the banana-flour pasta processed the carbohydrates significantly slower, making it a viable low-glycemic option (11).

The resistant nature of banana-flour starch also explains why it contains fewer calories than wheat flour. Because a significant portion of banana flour passes undigested to the large intestine, your body can’t use it as an energy source (12).

Resistant starch is also great because it acts as a prebiotic (a fuel that feeds healthy gut bacteria) (13). Maintaining a healthy gut is crucial. Scientists have linked an unhealthy gut biome to digestive problems, depression, nutrient deficiencies, and even autoimmune conditions.

Finally, resistant starch can help spur on weight loss. Because resistant starch is processed so slowly in the body, it keeps you feeling fuller for a longer time (14). While you might plow through two or three chocolate chip cookies made with wheat flour, you could probably stop after one that’s made from banana flour. Combine those feelings of fullness with the prebiotic effect and the decreased insulin response, and you’re cooking up a recipe for weight loss (15).

One of my most shocking discoveries during this research was figuring out just how many bananas go to waste.

All around the world, bananas with unusual shapes or slight blemishes get discarded just because growers know that no one in the supermarkets will buy them (16)!

We’re talking millions of tons of wasted bananas here. In India, for example, about 30% of the 16.8 million tons of bananas produced annually are wasted due to post-harvest losses (17). We’re wasting an incredible amount of perfectly edible food—and the resources required to grow them. And we’re forcing banana farmers (many of whom are destitute) to eat the costs.

Banana flour gives us a creative solution to that problem. A lot of flour manufacturers target this very portion of the harvests (which would’ve been discarded) as source material. Farmers get adequate compensation without having to throw out a good chunk of their crops. And the flour consumer is happy because the texture and nutrient profile are identical to bananas milled without strange shapes or blemishes.

So this method is a great way to make every banana count. Customers get pretty fruits in the produce section and nutritious flour.

How to Find Quality Banana Flour 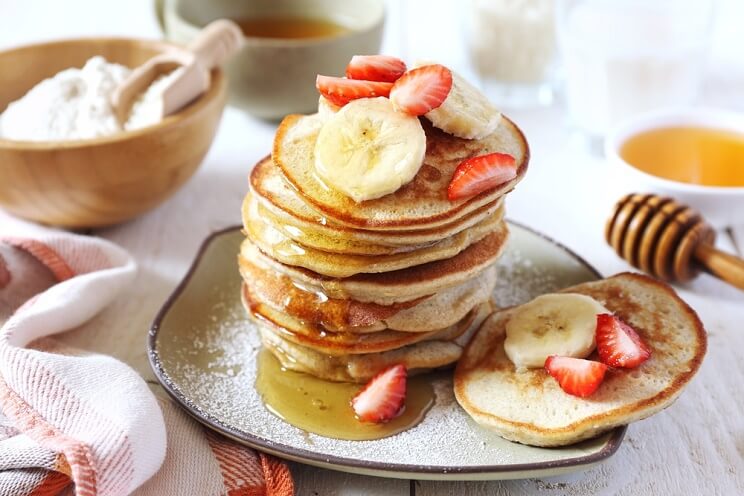 Itching to give banana flour a try?

You’ll find it online and in some grocery stores and health shops. Because it still isn’t as popular as other Paleo-friendly flours (such as almond or coconut), the availability is still limited.

Here are a few reputable suppliers to get you headed in the right direction:

As with sourcing anything Paleo, the key here is to do a little research into the ingredients and processing methods. Quality suppliers use organically grown bananas, and they don’t add anything else to the end product.

Banana flour can be a bit pricy, but it should last you awhile. Remember, you don’t have to use quite as much of it as wheat flour!

Even if you’ve followed a strict Paleo diet for years, it’s hard to deny the utility of flour. Sometimes, you just need something to thicken that sauce you’re making. Or hold together those delicious muffins or pancakes.

Banana flour offers that convenience without forcing you to compromise your healthy lifestyle. You can make the treats you love without going off the rails—without the dangers found in typical wheat but with legitimate health benefits.

Have you tried banana flour? Would you? What’s your favorite Paleo-friendly flour alternative? Leave a comment below and share your experience!

(Read This Next: Um, What is Coffee Flour?)