Combine two of the greatest desserts ever invented and create this uber-sweet Cinnamon Roll Apple Pie!

There’s nothing better than a good ‘ole apple pie baked with soft cinnamon rolls! Enjoy the best of both worlds by whipping up this indulgent dessert you can enjoy anytime. Made with gluten-free flours and natural sweeteners, it’s a wholesome dessert that’s both hearty and guilt-free!

Paleo cinnamon rolls are turned into a pie crust using a combination of almond flour and tapioca flour. Fill the inside with juicy red apples and tuck natural sweetness into the pie crust using cinnamon and coconut sugar. If you want to take it up a notch, add a homemade caramel sauce for extra richness (it’s easy to make)! 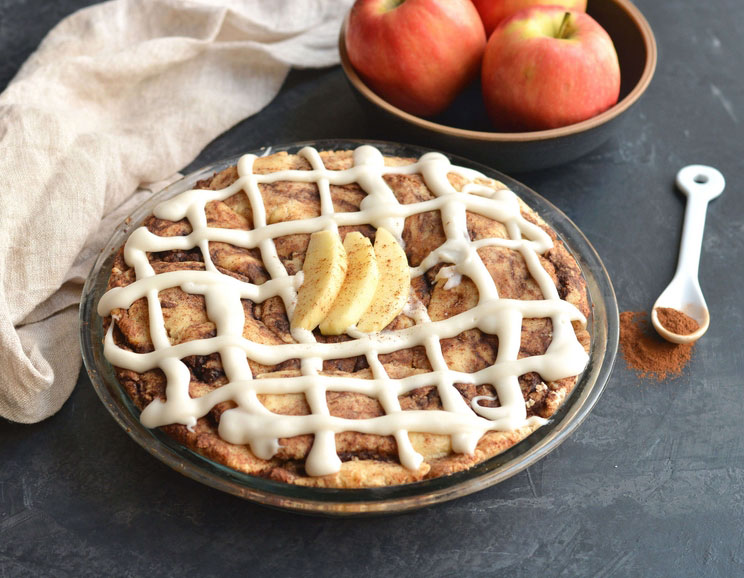 Because the crust is made Paleo and without gluten, the dough will be delicate. The trick is to chill the dough until it feels slightly sticky and liberally coat it with tapioca flour to make it easier to work with.

Make sure to sift the flours first and lightly spoon the contents into a measuring cup. Note: Avoid directly scooping with a measuring cup, since this tends to pack in too much flour and will alter the end-results of the recipe.

Serve your Cinnamon Roll Apple Pie with whipped coconut cream and a sprinkle of cinnamon on top for ultimate indulgence.

10 Nighttime Yoga Poses You Can Do in Bed
Next Post: Green Gazpacho with Savory Shrimp