If you’re looking for an indulgent Paleo breakfast or dessert to serve to a crowd, this cinnamon roll recipe is one to keep handy. It’s made with warm, fluffy dough and stuffed with fresh apples and walnuts. Each bite is bursting with apple pie flavor and best served with warm coffee or Paleo hot chocolate!

The date caramel sauce is the star of this recipe, keeping it perfectly indulgent and Paleo-friendly. Since dried dates are naturally sweet on their own, this recipe doesn’t require any added sweeteners. Adding a bit of canned coconut cream will help turn the softened dates into a gooey sauce, without watering down the flavor. Use this dairy-free sauce to top anything from coconut flour waffles to Paleo ice cream.

To get started, combine the ingredients for the date caramel sauce in a food processor. Pour into an eight-ounce jar and set aside at room temperature. Begin making the dough by combining flours, sea salt and baking powder in a large bowl. Next, begin heating the coconut milk in a saucepan over low heat until warm, about 110ºF. Remove from heat and whisk in one teaspoon of coconut sugar, plus the yeast. Set aside for five minutes so that the yeast can react with the sugar and properly froth up. 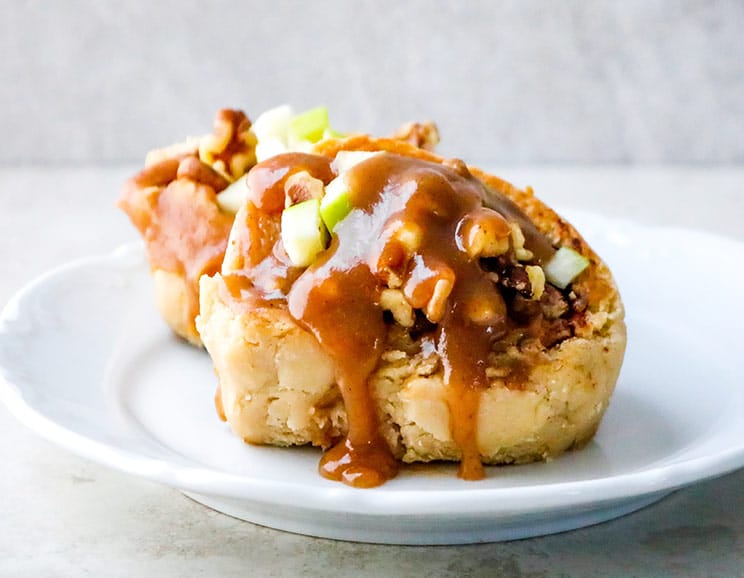 Next, whisk in the egg and a ¼ cup of melted ghee. Gradually pour the yeast mixture into the flour mixture and stir to combine. Form the dough into a large ball and set it into the center of the bowl. Lightly grease the bowl  to help prevent the dough from drying out. Cover with a damp clean kitchen towel and allow the dough to rise in a dark, warm spot for one hour.

Line a clean surface with a large piece of parchment paper and dust with extra cassava flour. Use a rolling pin to smooth the dough onto the parchment paper and form it into an 11 x 13-inch sheet of dough. Brush with one tablespoon of melted ghee and sprinkle with ¼ cup of coconut sugar and cinnamon. Evenly spread out the chopped apples and walnuts, leaving two inches of empty space around the perimeter of dough. Drizzle with half of the caramel sauce and reserve the rest for later.

Then, carefully roll the dough lengthwise into a log and use the parchment paper as a guide to lift. Slice the dough into 1½-inch rolls and place them into a greased round baking pan. Bake for 22 minutes, or until rolls are fully cooked. Remove from oven and use a spatula to spread the remaining caramel sauce on top. Garnish with additional chopped apples and walnuts, if desired.

Tip: Store leftovers in the refrigerator for up to five days or freeze up to two months in an airtight container.

For the Caramel Sauce:

This Epsom Body Spray is Like a Salt Bath in a Bottle
Next Post: 9 Yoga Poses to Release Tight Hip Flexors