Find out which baking faux pas could be the culprit behind those dry pastries and deflated soufflés.

Baked Paleo desserts are best when whipped up at home – nothing beats the sweet smell of coconut flour cookies straight from the oven or freshly baked chewy sweet potato brownies. But sometimes they can be tricky to nail down. Learn how to easily conquer simple baking mishaps with essential tips and techniques you can refer to anytime!

From skipping important steps to substituting ingredients, it’s quite common for many Paleo bakers to make a few mistakes now and then. Some missteps may seem straightforward, like not waiting until your baked goods have cooled before frosting them, but others may seem unnecessary – why would you need to sift flours?

Skipping crucial steps or using wrong ingredients are often sure-fire ways to quickly transform your recipe into a baking disaster. Whether you’re a newbie to Paleo baking or a seasoned pro, it’s helpful to know the reasoning behind these common mistakes and how to make sure your baked goods are flawless every time.

Read on to learn more about Paleo baking mistakes you might be making at home and how to correct them. 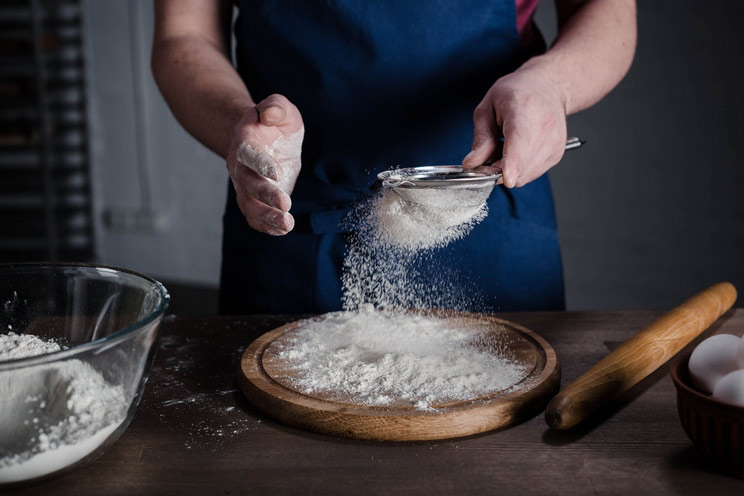 Sifting flours and other dry ingredients like cacao powder is an often-overlooked step. However, it could make or break the end result of your cookies, cakes, or breads. Even in conventional baking, where all-purpose flours and sugars should be sifted, it could produce unwanted clumping.

This is especially true with Paleo flours, where different varieties and textures are crucial to the baking process. From powdery tapioca starch to grittier flours like tiger nut, it’s essential to sift out clumps whenever a recipe calls for it. This will help create a light and airy mixture you can easily blend with other ingredients.

Show of hands: who measures dry ingredients by scooping directly from the bag? It’s one of those quick, time-saving efforts you likely don’t give a second thought about. Unfortunately, this process of scooping flours, Paleo-friendly sugars, and powders could be ruining your baked goods.

The problem with this way of scooping is that it does not yield the same measurement the recipe calls for. Since baking is a science, it’s important to keep things as precise as possible. The best way to do this is by spooning your ingredients into a dry measuring cup instead of using a large liquid measuring cup. This will allow you to properly level off the top and avoid extra packing that could be adding too much density to your recipes. 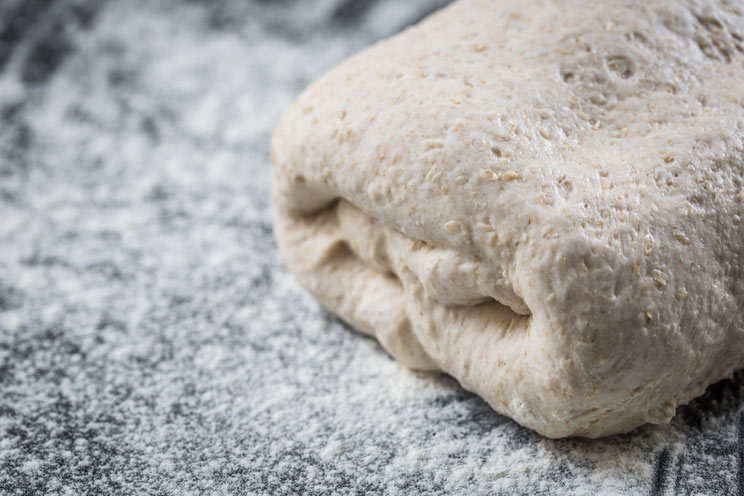 If the recipe calls for a resting period, adhere to it. You’ll want to ensure certain doughs and batters are able to lock in essential ingredients to plump up and thicken in the oven later. Not only will this give your baked goods a soft and ideal texture, but it’ll also allow your dough to easily relax before baking.

For cookie batters that request a rest time at room temperature, it’s important to follow these directions to work out any grittiness and reduce spreading. When directions say to chill certain doughs in the fridge, give it some time to firm up and bind together. This will allow the dough to become less sticky and easier to work with when rolling or shaping.

A fresh-baked Paleo muffin straight out of the oven looks so tempting (we know). But don’t burn the roof of your mouth just yet! The cooling process is essential to achieving the proper texture in many Paleo baked goods. Removing them too soon could result in cookies falling apart or breads crumbling and cracking as you lift them from the pan.

You’ll also need to be cautious about adding whipped creams and frostings to your pies and cakes while they’re still hot. If the surfaces are not properly cooled, you could risk having the creamy toppings melt and separate – especially since they don’t share the same properties as dairy.

Not Beating Eggs to the Right Consistency 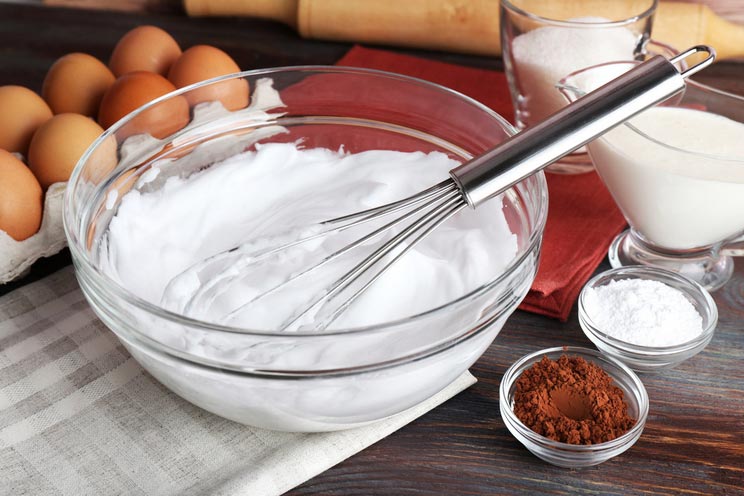 If you don’t care whether the recipe calls for stiff peaks or soft peaks, you might want to pay closer attention. Whipping egg whites into pillowy soft peaks is a crucial step to getting the proper lift in soufflés, fluffy pancakes, and even meringues. Set your electric mixer no higher than medium speed and pay close attention to how the egg whites peak (like a mountain) when pulling the whisks out.

There are three “peaks” you can whip egg whites into: soft, firm, and stiff. The only real difference in making them is how long you beat the egg whites. Soft peaks hold some shape and quickly fall into themselves when pulling out the whisk. Firm peaks hold their shape longer and have a subtle fold on the tips. Stiff peaks hold their shape the longest and stick up straight, even if you flip the bowl over!

It takes roughly five minutes to reach the stiff peak stage with an electric mixer, though this is not an exact science. Don’t beat your egg whites past these stages, or they’ll separate into an unpleasant foam.

We get it: Sometimes you want to bake right now, and you forgot to soften your coconut oil or grass-fed butter beforehand. But don’t throw those solid fats into your baked goods before blending!

Room temperature cooking fats are essential to getting the optimal “creaming” texture when whipping up Paleo cookies and other recipes. Cold coconut oil and grass-fed butter won’t blend easily and will, instead, break into an unpleasantly “chunky” texture. Take the extra time to let it sit out beforehand and avoid dealing with the disappointing aftermath of a baking fail. 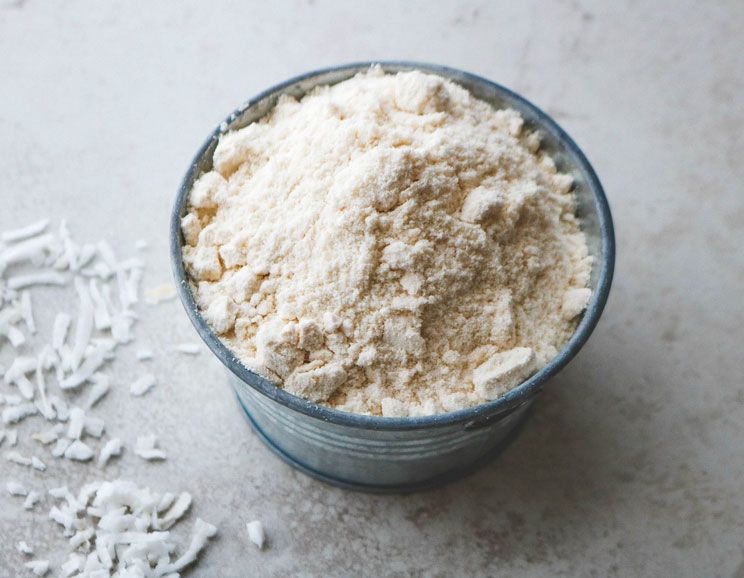 Coconut flour is a wonderful, versatile Paleo ingredient to bake with. However, it’s also important to remember that it cannot be subbed as a one-to-one ratio for other flours. Because of its powerful absorbency properties, coconut flour is a unique baking agent that needs to be properly balanced with other ingredients.

In general, you need much less coconut flour in a recipe than grain-based flours. You’ll also need to increase the number of eggs you use as well as other liquids. If it’s your first time experimenting with coconut flour, it’s best to start off with well-established recipes like cookies, biscuits, and bread. These are great for beginners and a perfect way to familiarize yourself with its unique abilities.

Using the Wrong Milk or Cream

Do you use coconut milk, almond milk, and coconut cream interchangeably? You may want to reconsider.

Every Paleo “milk” and “cream” has a specific fat content that affects baked goods differently. Coconut cream has the most fat of all the non-dairy options and is best used for Paleo frostings, whipped cream, and pie fillings. It’s perfect for recipes that require a thick texture with a creamy consistency.

Although almond milk and coconut milk are great for other Paleo recipes, it simply won’t deliver the same texture when whipped. That’s not to say almond and coconut milk don’t have their place in baked goods. Traditional recipes that call for dairy milk – like muffins, pancakes, cakes, breads, and other baked goods – are all great places to use almond or coconut milk instead. They can easily be substituted on a one-to-one ratio and can be interchanged with each other or dairy milk.

If you plan to use almond milk or coconut milk in a custard or pudding, you’ll likely need to include a thickening agent like tapioca starch, gelatin, or arrowroot powder.

Not Greasing Your Pans 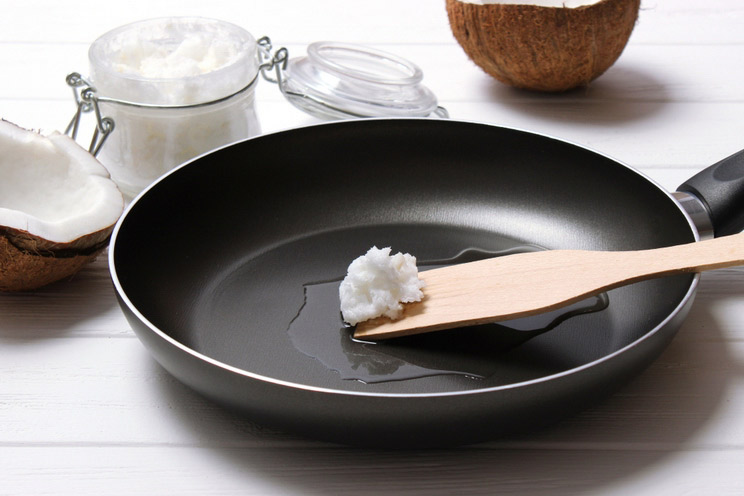 Have you ever felt the pain of having a perfectly good baked cake stick to the pan? It’s an awful feeling to slave over a recipe, only to watch part of it fall apart as you try to remove it from the pan. It’s even worse when the rest falls on the floor when you try to flip it onto a plate.

To avoid this catastrophe, grease your pans properly before filling them with batter. We recommend coconut oil or grass-fed butter as the ideal greasing agents, since both are ideal for high heat temperatures.

Have you seen the instruction in a recipe to mix your batter “until just combined”? Take note: this step is important. If too much air is incorporated into doughs and batters, it might form a “sunken cake” effect, where the center collapses in the oven. To avoid this, use a light hand when mixing, and fold in dry ingredients until just combined with their wet counterparts. Resist the temptation to over-mix flours that are dense in texture (like almond flour or hazelnut flour).

While over-mixing batter is a bigger concern in gluten-laden treats – as it affects the texture – it’s not to say you shouldn’t be cautious when working with gluten-free ingredients. Nut flours like almond flour respond especially poorly to over-mixing, as they release their oils when mixed too much. Over-mixing these flours can lead to wet and oily cakes or could negatively affect the final outcome of other baked goods.

Subbing in the Wrong Ingredients

We’ve already covered that coconut cream can’t be subbed for coconut milk or that coconut flour is a tricky flour to substitute because of its over-absorbent ingredients. However, the same goes with trying to sub in gluten-free flours for other wheat flours on a one-to-one ratio. While this may sound like a tempting solution to transform a non-Paleo recipe into a gluten-free version, most grain-free flours need to be balanced with other binders, moisture, and textures. (You can check out common flour replacement ratios here.)

Cacao powder alters the moisture content of a recipe when used on its own, but when mixed with a bit of melted coconut oil or grass-fed butter, it can mimic the effect of melted chocolate. Always include one of these melted fats when attempting this kind of substitution.