In this Paleo version of Zuppa Toscana, low carb parsnips are swapped in for potatoes, and coconut cream steps in to keep the soup creamy and dairy-free. Plus, you’ll have this comforting meal ready in under an hour!

Parsnips are a terrific Paleo-friendly substitute for white potatoes. They’re also high in fiber and are full of manganese and potassium. We’ll also be adding ground pork seasoned with fennel seeds, basil and garlic powder to create the warm, meaty flavor that runs throughout the soup. Finally, we finish the Zuppa Toscana with vitamin K-rich wilted kale for added antioxidants and a nice leafy texture. 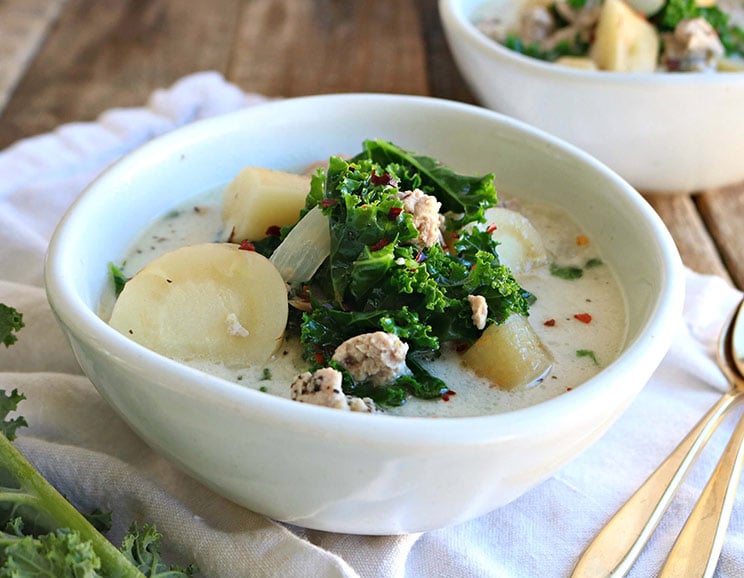 Start by browning the pork and softening the onions together in a large pot with seasonings. Add the chopped parsnips, chicken bone broth and the cream portion of a can of coconut milk. Tip: Keep the coconut water to use in smoothies! Bring the soup to a simmer and cook uncovered for 25 minutes. Stir in the kale and cook for 5 minutes more, until just wilted. Finish with chili flakes for a bit of heat.

Tip: You can also use pasture-raised Italian sausage in a pinch, just remove the sausage from the casing and break it up into small pieces.

Keep The Doctor Away with These 41 Amazing Apple Recipes
Next Post: 6 Exercises to Erase Foot and Ankle Pain