Paleo vs Keto: Similarities, Differences + Which Is Best For You

The Paleo diet and the Ketogenic diet have both gained extreme popularity in recent years for their acclaimed ability to promote weight loss, fat reduction, improved metabolism, and numerous other benefits.

While there are a lot of overlapping similarities between the two, Paleo and Keto each have their own unique purpose that, at times, can be combined into a Paleo-keto diet.

So, what is the difference and how do you know which angle is best for you? 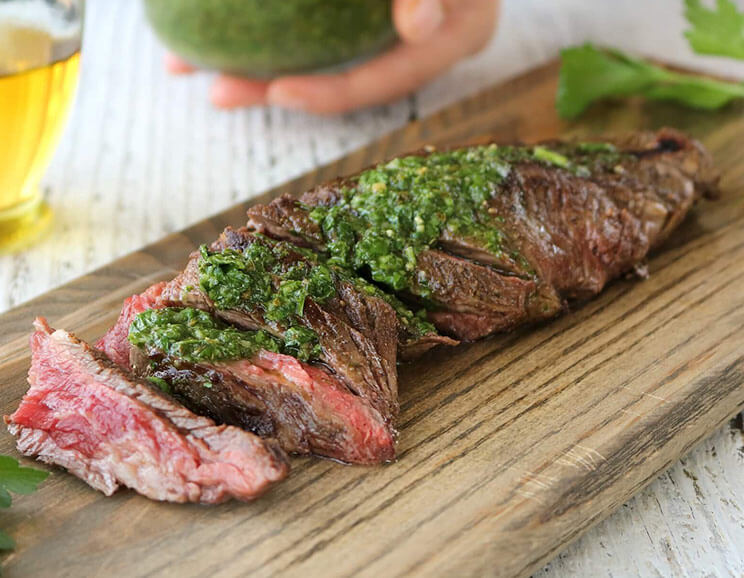 The Paleo diet is often referred to as a “caveman diet” because it mirrors the dietary habits of our ancestors from before the age of agriculture. Paleo eliminates grains, dairy, legumes, and processed and refined foods, along with hydrogenated and “vegetable” oils that don’t contain any vegetable-like nutrients.

Instead, the Paleo diet focuses on eating high-quality fruits, vegetables, nuts, seeds, meats, eggs, and seafood. Because Paleo naturally avoids refined sugars and processed carbs, it is significantly lower in carbohydrates than the Standard American Diet (or SAD). And, because of the high intake of vegetables, fruits, and healthy omega-3 fats, eating Paleo can lead to reduced inflammation, weight loss, and a number of other benefits, including improved diabetes and cardiovascular disease risk factors. (1) 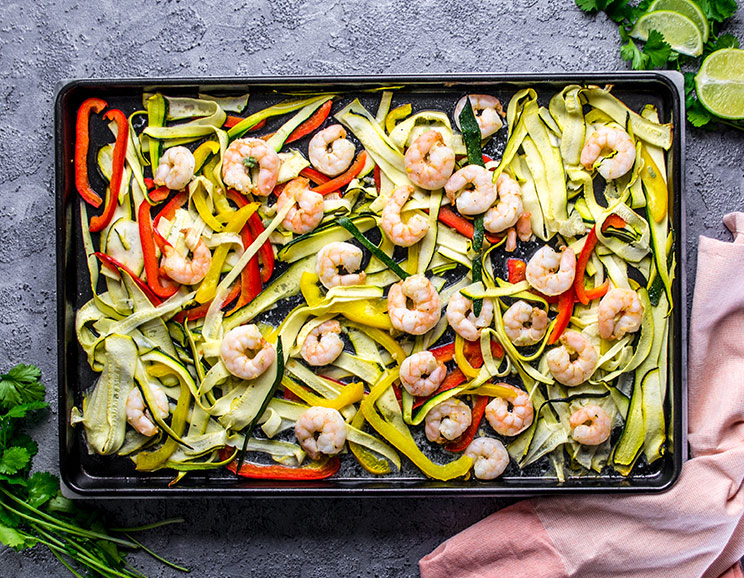 A ketogenic diet focuses on switching the body’s primary fuel source from glucose, which is broken down from carbohydrates and proteins to ketone bodies (ketones for short). Ketones are produced when there is a deficiency in enough carbohydrates to create glucose.

Glycolysis is the process in which the body converts glucose to energy for the cells. This can only happen when carbohydrates are available and carb stores do not last long, in most cases, needing replenishment within 12-24 hours. Ketogenesis is the body’s alternative way of providing cellular fuel in the absence of carbs; with body fat to break down and convert into usable energy. Dietary sources of fat and a highly limited intake of carbohydrates spurs the body to enter ketosis faster. [tweet_quote]A ketogenic diet focuses on switching the body’s primary fuel source from glucose, which is broken down from carbohydrates and proteins to ketone bodies.[/tweet_quote]

Ketones are formed when the body converts stored fat to energy sources, which is why it is often used as a way for people to lose a substantial amount of weight and body fat in a relatively quick manner. (2)

There are also other benefits to ketosis, including:

One of the long-time, medically used reasons for a ketogenic diet is its ability to address and reduce the symptoms of epilepsy. (8)

While you can enter ketosis relatively quickly in some cases, it generally takes anywhere from one to four weeks to become keto-adapted; where the body is fully relying on ketones for energy. (9)

How Do Keto and Paleo Compare? 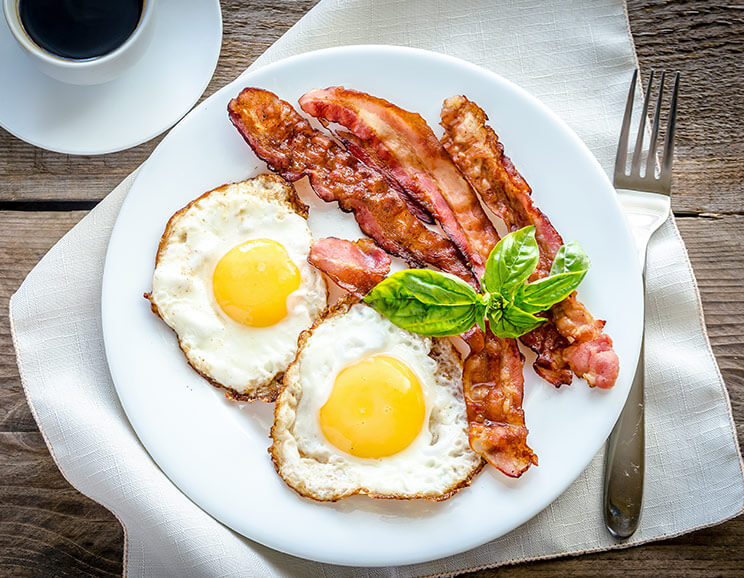 While there are many differences between keto and Paleo diets, there are also some significant similarities.

The keto diet aims to switch the body’s fuel source from glucose to ketones, so paying attention to these levels is essential for ketogenic success. A Paleo diet does not focus on measuring ketones.

The Paleo diet focuses on quality of food, especially in choosing grass-fed and wild-caught meat and fish products, organic produce, and free-range poultry. While these aren’t essential for a Paleo diet to work, they are a key aspect of the diet’s framework. While ketogenic eaters should also be concerned about the quality of their food, it’s not one of the essential tenets of the food plan, although a keto diet prizes food quality more than other ultra-low-carb diets like Atkins.

A keto diet focuses strongly on the macronutrient ratio – the amount of fats, carbs, and proteins that are eaten each day. This is important to achieve ketosis, as the primary macro for keto is fat, with less protein and restricted carbs. Many keto eaters will consume 100 grams or less of carbs per day, and sometimes 50 grams or less. The macro ratios needed to achieve ketosis are different for everyone based on your hormones, activity level, fitness, genetics, weight, and other health conditions. On Paleo, there are no limitations from counting macronutrients.

Paleo is Lower in Fat

While the Paleo diet definitely focuses on consuming plenty of healthy fats, Paleo eaters still eat significantly less fat than keto eaters. Keto dieters aim for a 50 percent or higher ratio of fats in the diet per day, and they balance it between saturated and monounsaturated, and omega-3s and omega-6s.

Both keto and Paleo eaters can fall into imbalanced ratios between omega-3 and omega-6 if they aren’t careful, as nuts and seeds are frequently consumed on both diets, sometimes in excess due to their convenience.

Different Foods Allowed on Each Diet

There are certain foods that are allowed on the Paleo diet and not keto and vice versa. For example, dairy is acceptable on the keto diet but not on Paleo, while starchy vegetables like sweet potatoes are Paleo, but not ketogenic.

Paleo foods are determined by general category, whereas a food is determined to be keto based strictly on the macronutrient ratios of fat to carbs to protein. Both diets exclusively avoid grains and refined sweeteners.

Sweeteners are Minimal on Keto

Speaking of sweeteners, the Paleo diet allows certain kinds of refined sugar alternatives like coconut sugar, dates, maple syrup, stevia, monk fruit, and raw honey. A keto diet can use monk fruit and stevia because they contain no carbs, but the other sweeteners are almost always off-limits for keto eaters because of the carb counts. 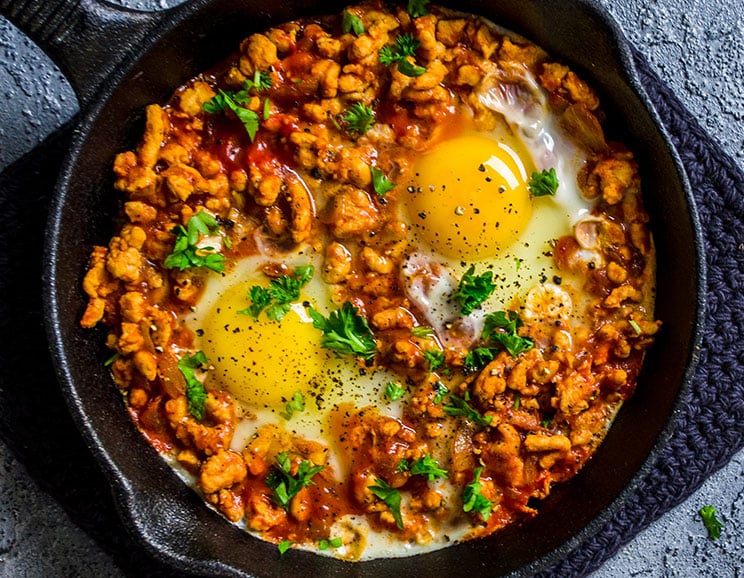 The Paleo-keto diet is becoming one of the most popular hybrid diets that exist, as it borrows the best aspects from each diet while eliminating mutually exclusive factors. Basically, a Paleo-keto diet is a low-carb version of Paleo that emphasizes more Paleo-friendly fats.

Here’s a breakdown of how the Paleo-keto diet works.

How Do You Know Which Diet is Right for You? 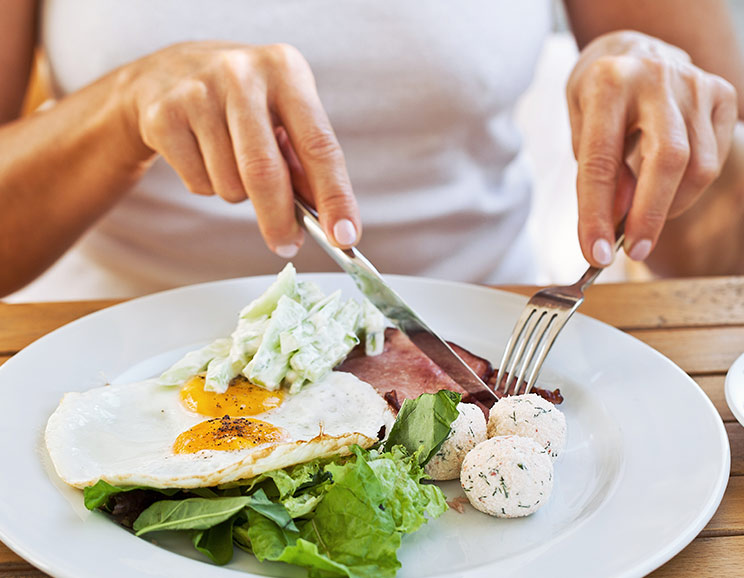 Whether you’re going Paleo, keto, or a hybrid of the two, these diets can help to reduce weight, lower inflammation, and balance other body factors like blood pressure, cholesterol, and glucose. So, if those factors are all common, how do you know which version is the best for your current needs? While nothing can replace one-on-one advice from your personal physician or practitioner, the following guidelines can help you start the process of elimination.

For Sustainable, Long-Term Weight Loss: Paleo or Paleo-keto
A keto-only diet that is done for a short while might lead to weight gain once normal eating has resumed.

For Beating Sugar Cravings: Keto or Paleo-keto
Because both essentially eliminate all forms of sweets entirely, you’ll have a better chance of kicking the sugar habit.

For Becoming a Healthier Eater: Paleo
Paleo allows for a more varied intake of vegetables and fruits in larger quantities, which makes eating healthy much more sustainable.

For Overcoming an Eating Disorder: Paleo
Macro counting for keto eating can become obsessive for some.

For a Busy Lifestyle: Paleo
If you’re busy and especially if you travel a lot, counting macros can easily become complicated. Finding quality high-fat foods on the go is more difficult than seeking out Paleo foods, even in most restaurants.

For Balancing Blood Sugar: Keto or Paleo-keto
Diabetics (and prediabetics) respond well to the highly controlled carbohydrate intake of the keto diet. (10,11,12)

For Lowering Cholesterol: Paleo, Keto, or Paleo-keto
Cholesterol responds to reduced inflammation and less processed or refined foods, and all three of these diets provide that.

For Boosting Brain Health: Keto or Paleo-keto
Mental clarity and focus improve on the keto diet because you’re fueling your body and brain from ketones instead of glucose.

For Beating Hormone Imbalances: Keto, Paleo, or Paleo-keto
It depends on the specific hormone issue. PCOS responds well to keto or Paleo-keto, while thyroid disorders respond better to the higher carb intake of Paleo. 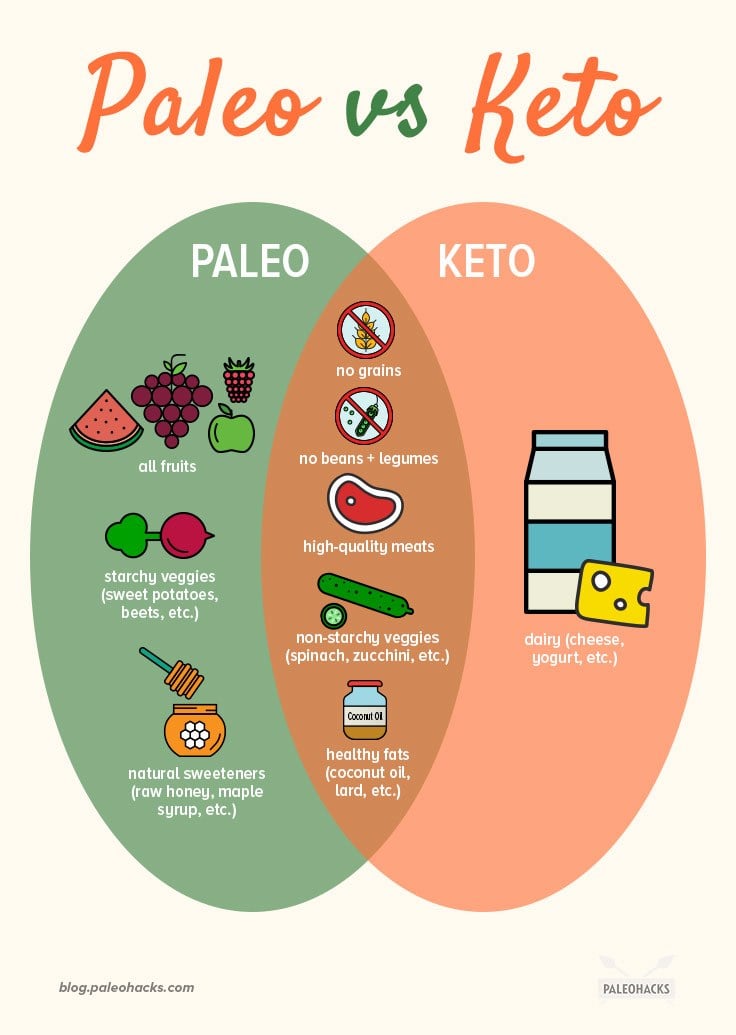 (Read This Next: Organic vs. Conventional Food: Here’s The Real Difference)

DIY Epsom Salt Compress for Neck + Shoulder Pain (Plus: Soothing Stretches)
Next Post: 11 Ways To Use A Tennis Ball to Fix Back Pain