When you purchase furniture, you also purchase a host of dangerous chemicals hidden in their glues, glosses, and fabrics.

Toxins can be lurking in your favorite couch, mattress and even bookcase. Here’s how to get rid of hidden toxins in furniture.

Buying new furniture is an exciting time. Perhaps you’re decorating a new home, or finally treating yourself to a new (amazingly comfortable!) mattress. Unfortunately, there’s a side to furniture shopping not many consumers know about.

In reality, the compounds that make furniture soft, sleek, or “new” smelling, actually belong to a class of chemicals called volatile organic compounds (VOCs). These compounds behave as toxic gases that pollute the air in your home and vehicle, causing all kinds of nasty side effects when inhaled, like: eye, nose, and throat irritation; headaches, loss of coordination, and nausea, along with liver, kidney, and central nervous system damage. Some are even known to cause cancer. (1)

Before you panic, know that there are several ways to limit your exposure to these chemicals from your furniture. But first, let’s take a look at some of the hidden toxins in furniture, so you know what you’re dealing with.

Keep in mind that the list below is by no means 100 percent inclusive. To give you an idea of how many chemicals are actually found in furniture, consider that Environmental Science and Technology has found over 30 in mattresses alone. (2) This doesn’t even include sofas, vehicle furniture, and so on. To see additional chemicals, visit the EPA’s factsheet. 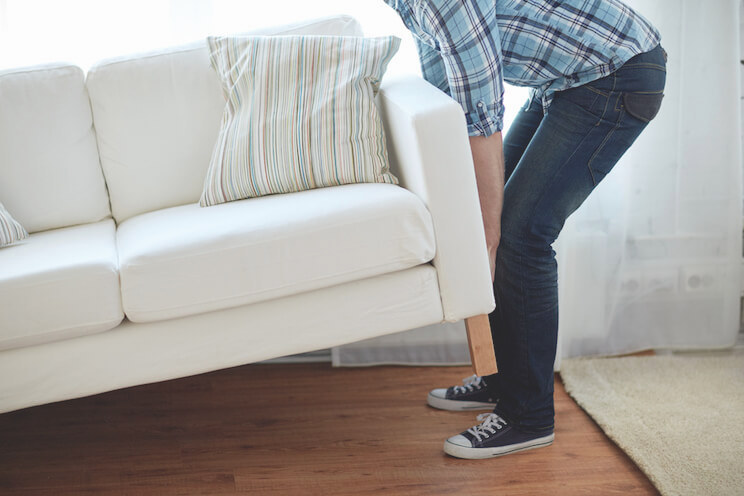 Formaldehyde is a colorless chemical with a strong odor that is commonly found in pressed-wood products, glues, adhesives, plywood, fabrics, and product coatings. The National Cancer Institute states that side effects from short-term exposure include: watery eyes; burning sensations in the eyes, nose, and throat; coughing; wheezing; nausea; and skin irritation. Long-term exposure could mean cancer, since formaldehyde is also classified as a human carcinogen by several agencies, including the Environmental Protection Agency (EPA). (3, 4)

Acetaldehyde is a chemical used in the production of perfumes (think “new-car” or “new-furniture” smell), polyester resins, dyes, rubber production, and in tanning agent production. It is classified as a “… probable human carcinogen based on inadequate human cancer studies and animal studies that have shown nasal tumors in rats and laryngeal tumors in hamsters.” Short-term side effects listed by the EPA include irritation of the eyes, skin, and respiratory tract. (5)

While the chemical benzene is commonly associated with vehicle exhaust and coal emissions, it is also found in detergents and dyes, which could be used on your furniture. It is also used as a solvent for waxes, resins, and plastics, which are used in furniture manufacture.

Side effects include: drowsiness, dizziness, headaches, irritation of eyes, skin, and respiratory tracts, blood disorders including reduced numbers of red blood cells and aplastic anemia, adverse reproductive effects on developing fetuses, and increased leukemia incidence. In fact, the EPA has classified benzene as a “known human carcinogen for all routes of exposure.” (6)

Vinyl Acetate is a chemical used in the production of polyvinyl, adhesives, paints, films, and lacquers. Most of its effects involve the respiratory system, and include coughing and inflammation. While the EPA hasn’t classified it as a carcinogen, it states that studies have found, “an increased incidence of nasal cavity tumors … observed in rats exposed by inhalation.” (7)

Hexabromocyclododecane (HBCD), is a category of toxic flame retardants, used to minimize the chance of fire spreading should your couch or mattress catch on fire. The EPA states that it accumulates in the environment, in breast milk, and “biomagnifies” in the food chain. It can also be transported long distances and remains persistent in its environment. This is bad news, considering it has been known to have adverse reproductive, developmental, and neurological effects. (8) 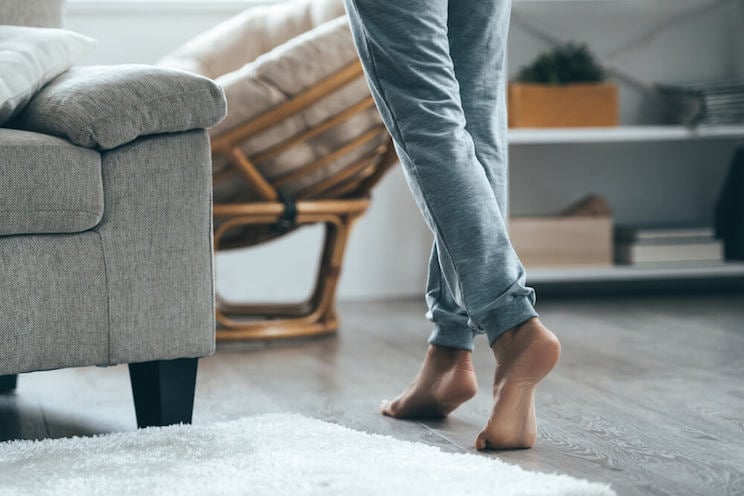 Perfluorooctanoic acid is a chemical historically used in carpets, leathers, and upholstering to make them waterproof and stain-resistant. Since 2015, the EPA has attempted to regulate PFOA due to its accumulation in the environment, but it’s still used nationwide.

The half- life for PFOA in the human body is 3.8 years (meaning it takes double this time for it to leave your body) where it causes: liver toxicity (hypertrophy, necrosis, and effects on the metabolism and deposition of dietary lipids), kidney toxicity, and developmental effects (survival, body weight changes, reduced ossification, altered puberty, and retarded mammary gland development), and cancer. (9)

Trichloroethylene is a VOC used as a solvent in dry cleaning and metal degreasing. Apparently, the fact that it is classified as a known human carcinogen still doesn’t stop the U.S. from using around 250 million pounds per year in manufacturing.

Other side effects include: adverse effects on developing fetuses, light-headedness, drowsiness, headaches, and effects in the liver, kidneys, immune system and central nervous system. (10)

Polybrominated diphenyl ethers are additional flame retardants classified in a cluster, since they contain more than a few chemical combinations. They leach out of foams, plastics, and fabrics and pollute the air, while also accumulating in the environment. The main safety concern with these involves adverse neurobehavioral effects (an interesting thing to consider if you’ve been experiencing behavior problems with anyone, including children). (11)

Phthalates are a class of chemicals used in nearly every consumer product, from plastics to tablecloths. As for furniture, they can be found in floor tiles, furniture upholstery, carpet backings, and packaging. They are considered major endocrine disruptors that interfere with natural hormone regulation and production. They can affect development in children, resulting in changes in male hormone production, altered sexual differentiation, and changes to reproductive organs. In addition, prenatal exposure to some phthalates has resulted in deformities of the genitals and anus. (12)

How to Get Rid of Toxins in Furniture

As promised, below are several ways you can naturally get rid of, or at least minimize, the levels of these toxins in furniture. 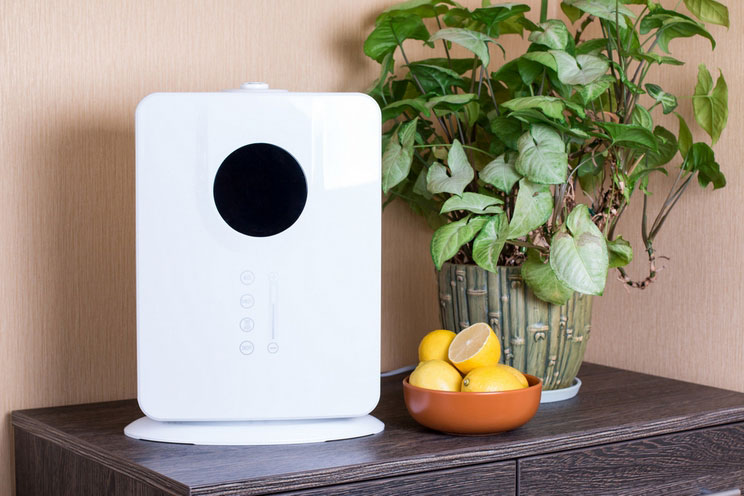 Investing in a great air filter, like this one or this one, can go a long way in removing dangerous chemicals hanging around in the air from your furniture. PCO cleaners in particular use UV light to change gas-based pollutants into harmless products. However, they do not remove particles like an air purifier. (14)

Many VOCs are acidic in nature. Because of this, using alkaline baking soda as a deodorizer and to trap harmful gases, may provide some relief. (15)

To do this, simply sprinkle baking soda over furniture or carpets and use the brush attachment on your vacuum to work it into the fabric. Let the baking soda sit for as long as possible, then vacuum it up. Take this a step further and air out your home afterwards. 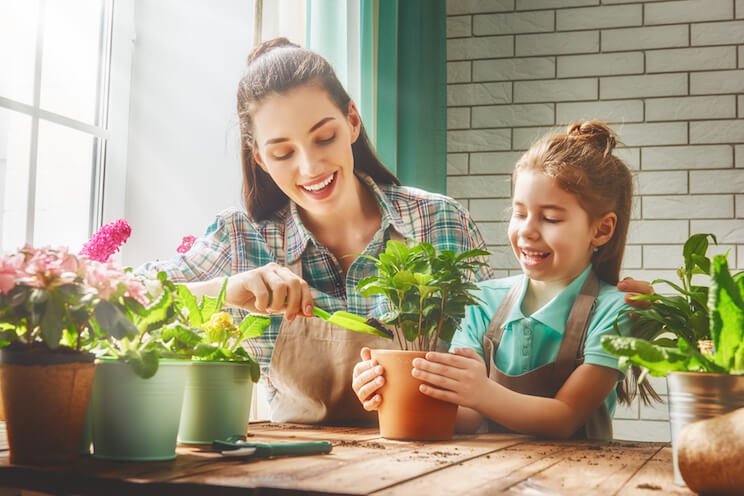 Studies show that some varieties of house plants help absorb chemicals lingering in the air.

Charcoal has been used in the past to help remove dangerous gases during warfare due to its highly absorbent nature. (19) Purchasing a charcoal filter for your home may help remove some of the VOCs lingering in the air in your home environment. Just be sure to change the filters frequently. 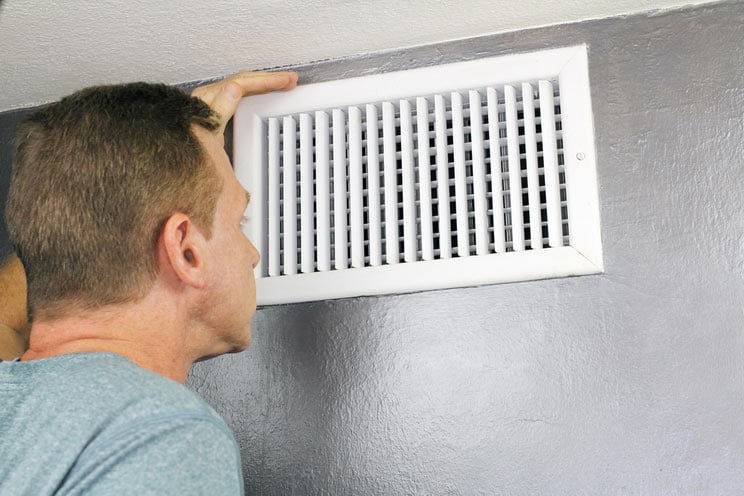 After purchasing new furniture, it would be wise to let it “off-gas” or “air out” outside or in a garage with lots of ventilation. By doing this, you allow the chemicals that evaporate from the furniture the quickest to be released outside your home. While this will be no means get rid of all of the VOCs (some can take up to 6 months to off-gas, while others stick around for years), it can help with the initial off-gassing of other VOCs.

Be sure to keep your home well-ventilated as well, with periodic airing out to reduce the accumulation of chemicals in the air.

While it’s nearly impossible to fully remove all of the chemicals in your environment and on your new furniture, these techniques will go a long way in minimizing you and your family’s exposure.

(Read This Next: 4 Big Problems With Microplastics (& 4 Natural, Toxic-Free Alternatives))