Fire up the grill. This fresh take on spiced tandoori chicken has a quick coconut-milk marinade that’s ideal for dinner!

This spiced tandoori chicken dish is traditionally marinated in yogurt. To make it Paleo, coconut milk replaces yogurt, while still keeping the marinade thick. With seasonings like coriander, cumin, and turmeric, the marinade is full of rich flavor and antioxidants. 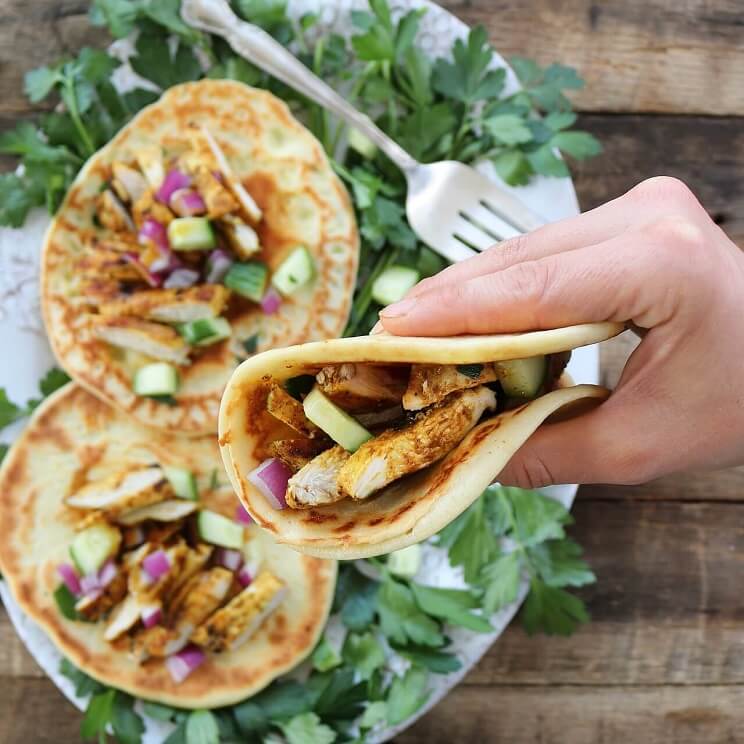 Tip: The marinade doubles as a sauce for serving, so be sure to reserve a little bit before marinating the chicken.

Start by making the marinade. In a shallow dish, add coconut milk and whisk in the dry seasonings. The marinade should be thick and creamy and have an orange hue. Add chicken breasts and swish them around to completely coat in the marinade. Cover and refrigerate for at least one hour. When you’re ready to cook the chicken, preheat your grill to 450 degrees on direct heat.

The chicken breasts should have a thick coating of marinade around them. Place onto grill and cook 6-7 minutes per side. You want the chicken to be lightly charred and have grill marks. If you don’t have an outdoor grill, the chicken can also be cooked on a grill pan on the stove.

Once removed from the grill, allow the chicken to rest a few minutes. Then slice or shred and serve with Paleo naan bread. Using a blend of cauliflower and ground almonds, this bread is sturdy enough for piling high with toppings. And it can be folded and eaten like traditional naan bread.

I modified this grain-free naan bread recipe. Instead of baking it in the oven, I cooked it in a pan on the stove.

Finish each serving with a splash of sauce, fresh parsley, diced cucumber, and red onion.

Jennafer Ashley
This fresh take on spiced tandoori chicken has a quick coconut-milk marinade and is served with Paleo naan!