Made with a grain-free almond crust and a smooth coconut and chocolate filling, this French Silk Pie is a dessert dream.

I’m willing to bet you already have everything you need in your pantry to make this chocolatey French silk pie. The ingredients are just waiting for you to transform them into a blissful treat that’s not only grain-free, dairy-free and gluten-free, but also easy to make.

Start by tossing the crust ingredients into a food processor. Pulse on high for 1 to 2 minutes until a dough ball forms. Place the dough in a standard pie pan and press into an even layer. Then bake until golden brown. 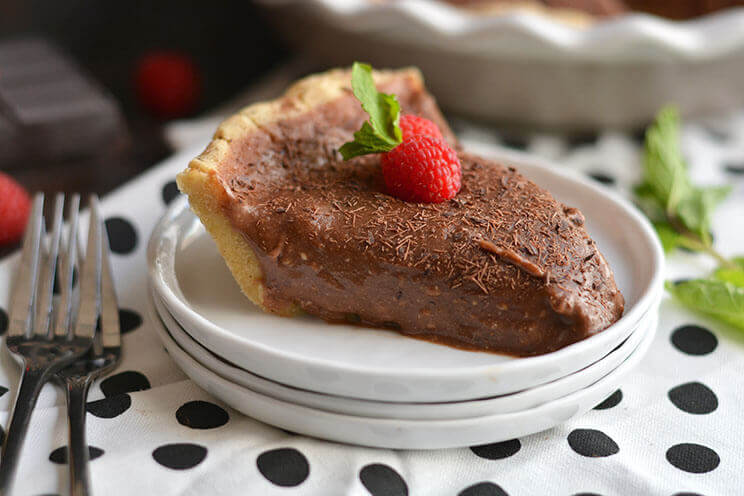 While the crust cools, melt the dark chocolate in a glass bowl fitted over a saucepan (if you have a double boiler, you can use that instead). Note: when buying dark chocolate, make sure it’s raw cacao with no added dairy or sweeteners to make sure you get the full health benefits.

As the chocolate melts, beat together the eggs, coconut sugar and coconut oil. Make sure you use high-quality, organic, free-range eggs, because this batter will be eaten raw! Add the melted chocolate to the egg mixture, whisking them together until smooth and thick. In a separate bowl, stir the coconut cream until it’s very creamy. Then fold the coconut cream into the chocolate mixture. Pour that delectable chocolate cream filling over the crust and refrigerate overnight.

Once the pie is set, slice using a knife. Run the knife under hot water a few seconds. That’s the trick to getting the perfect slice every single time!

Megan Olson
Made with a grain-free almond crust and a smooth coconut and chocolate filling, this French Silk Pie is a dessert dream!
Tools
Ingredients

The Total-Body Superhero Bodyweight Workout
Next Post: DIY Serum to Get Rid of Acne Scars Naturally