When you think about health foods, how often do you consider chocolate?

Fortunately, dark chocolate is a superfood! When you consume the right type of dark chocolate, you can look forward to surprising benefits, like boosting your antioxidants, lowering blood pressure and even reducing your risk of cancer.

Read on to discover the surprising benefits of dark chocolate, as well as what type you should be eating.

Throughout history, dark chocolate (or cacao, as it’s called before being made into a chocolate bar) has been hailed as a health tonic. This is especially true throughout Mesoamerican cultures, who held the belief that the cacao bean was a sacred food handed down by the gods to provide stamina, heal numerous diseases, and reduce fatigue (1).

In fact, the effects of cacao were thought to be so powerful that consumption was reserved specifically for priests, high government officials, military officers and great warriors. It was considered unsuitable for women, children, and the lower classes due to its potency.

What exactly is it about dark chocolate that makes it such a cherished health food? Let’s dive into the research-backed facts behind its benefits.

Many of dark chocolate’s surprising benefits stem from its potent antioxidant compounds epicatechin, catechin, and procyanidins, along with flavonoids and polyphenols. These antioxidants are responsible for putting a halt to DNA damage, reducing inflammation, regulating glucose levels, slowing aging, and more.

Read on to see just how powerful they are in dark chocolate.

Not only does dark chocolate make you feel similar to being in love (okay, maybe not that good), but it has major benefits for your heart and blood pressure levels.

Studies show that the compound prostacyclin in dark chocolate is able to help lower blood pressure by increasing vasodilation, the opening and loosening of your arteries and blood vessels (2). In addition, another study revealed that higher chocolate intake is associated with a lower risk of future cardiovascular events (3).

The Kuna Indians of the San Blas islands of Panama, who drink roughly three cups of a cacao beverage daily and have a very low prevalence of hypertension, myocardial infarction and stroke compared to those on the mainland, are a good example of chocolate’s benefits at work. In addition, studies have found that their blood pressure doesn’t rise with age (4).

As we mentioned earlier, dark chocolate is loaded with antioxidant compounds that help fight the DNA damage that causes aging symptoms like wrinkles, graying hair, and disease. In fact, research shows that just a single serving of cacao contains more phenolic antioxidants than most foods and more antioxidants than many Americans get on average per day (5).

Research also shows that the polyphenols and flavonoids in dark chocolate can help protect your skin from UV damage, which is a huge factor in preventing skin aging (6).

Alongside lowering blood pressure and improving heart health, dark chocolate also has a few cholesterol-lowering tricks up its sleeve. Studies have shown that just one week of dark chocolate consumption was enough to improve lipid profiles and decrease platelet reactivity for both men and women (7). This may be due to the fact that the cocoa butter in dark chocolate contains some of the same heart-healthy fatty acids found in olive oil.

Dark chocolate has been studied for its ability to boost cognitive function by improving cerebral blood flow, thanks in part to its high flavanol content. One study showed that the intake of flavonoid-rich foods, including chocolate, wine and tea, results in improved cognitive performance, especially in elderly participants (8).

Another study out of Italy also found that the flavanols in chocolate could prevent and even reverse age-related memory decline (9).

Research has shown that dark chocolate improves glucose balance, insulin sensitivity and inflammation markers – all symptoms that contribute to the development of diabetes. In one particular study, scientists found these benefits occurred only when participants ate dark chocolate; those who consumed white chocolate received no benefits (10).

Interestingly, a study in Japan found that the risk of developing diabetes was reduced 35 percent among men who consumed “chocolate snack pieces” once per week or more versus those who never or almost never ate chocolate (11).

To date, studies have confirmed that chronic inflammation contribute to factors that increase your risk of developing cancer, including DNA mutations and cancer cell growth. Research has confirmed that the antioxidants in dark chocolate have a strong ability to fight the DNA damage that could lead to cancer development, as well as reduce certain inflammation enzymes that could encourage its growth (12).

Flavonoids have been shown to offer significant protection for neurons in your brain and nervous system. Specifically, they reduce neuroinflammation, which has been found to be a major cause of the development of Parkinson’s and Alzheimer’s disease. In addition, their ability to increase cerebral blood flow encourages the growth of new neurons in the hippocampus, which processes memory (13).

Just when you thought chocolate was banned from your diet while trying to lose weight, research shows it may actually help you keep cravings in check, which can help keep the pounds off. Studies have found that the smell of dark chocolate reduces appetite and improves satiety (14).

How to Choose the Best Dark Chocolate

Obviously, not all chocolate is created equal. To get the most benefits associated with dark chocolate, you want to steer clear of any of the candy bar varieties (even if they are “gluten-free” or “Paleo”) and be sure to choose a bar that contains at least a 75 percent cacao content. This will ensure there are minimal added sugars, so you get the bittersweet goodness without the damaging effects of sugar.

How Often Should You Indulge in Dark Chocolate?

While dark chocolate is loaded with benefits, more doesn’t necessarily equal better. Most of these studies used a moderate amount of dark chocolate consumption, which could be comparable to a square of dark chocolate per day, or a tablespoon or two of dark cacao made into a hot chocolate drink (just make sure you don’t add any sugar).

Even if you don’t eat it every day, try to get in a dose of dark chocolate at least three times a week to boost your antioxidant levels and cash in on the many benefits of this true superfood. 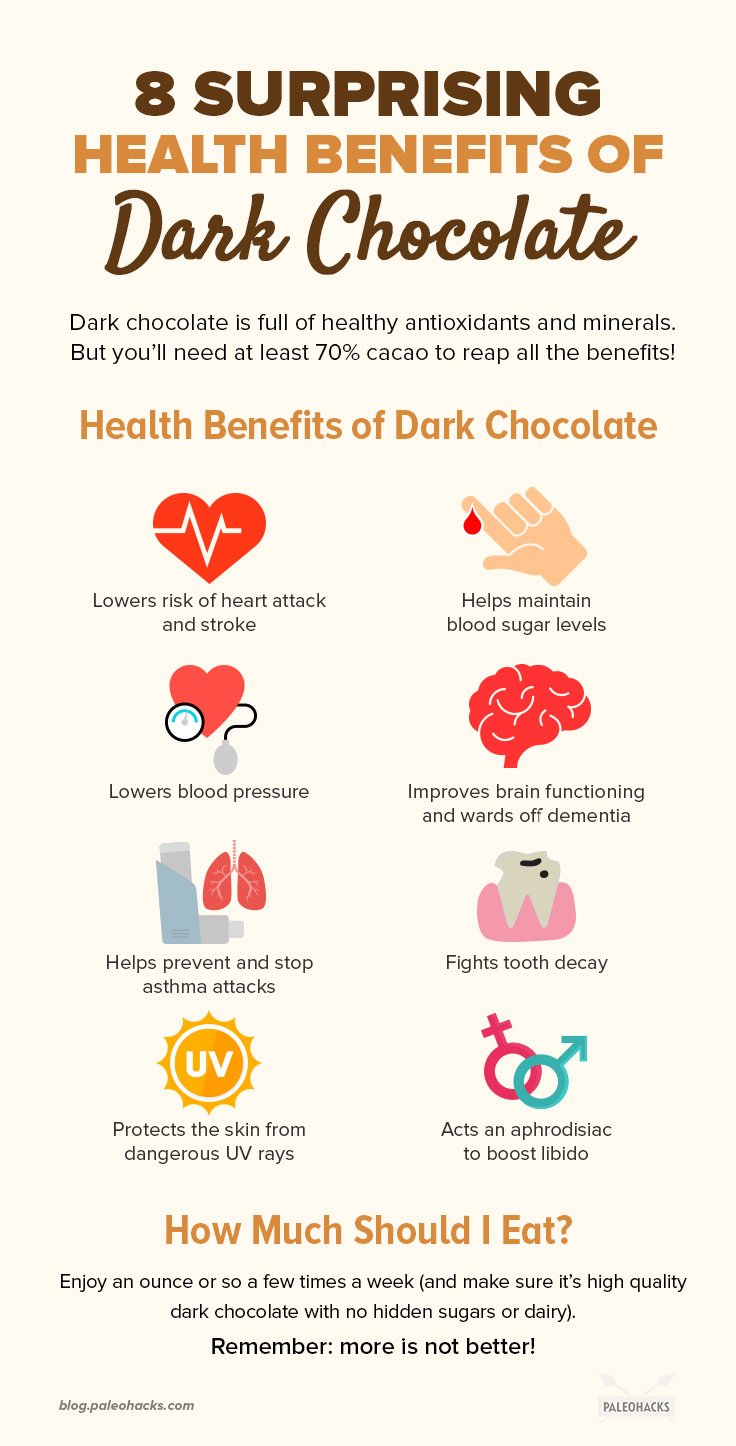 Paleo Bacon Spinach Quiche
Next Post: An In-Depth Look At GMO Foods: Are They Dangerous?