These baked eggplant Caprese stacks make for a stunning appetizer or side dish. Instead of frying in oil, eggplant slices are coated in almond meal and baked to crispy perfection.

Eggplant can be a polarizing vegetable: often mushy once cooked and not very exciting on its own. If you’re one of the people who think eggplant is not for you, I challenge you to try this baked, grain-free version. There’s something about the crispy coating that’s so satisfying and just as good as any fried vegetable I’ve tried. Almond meal is a terrific substitute for breadcrumbs, which are traditionally used to fry or bake eggplant. Almond meal is light and takes on a toasty, nutty flavor when baked. The almond meal gets an Italian boost of flavor from dried basil, oregano and garlic. 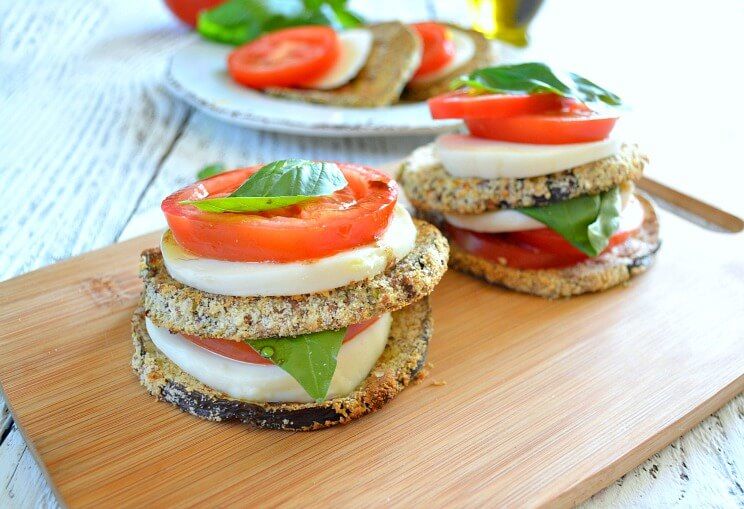 Before coating in Italian seasoned almond meal, the eggplant is dredged in egg to help the almond meal mixture stick. Make sure to gently shake off any excess egg from your eggplant—a light coating is all that is needed. I also found it handy to have a damp kitchen towel nearby to wipe my hands in between dippings and to prevent the almond meal from getting into the egg. The prepared eggplant is baked at a high heat to cook the eggplant and turn the coating a crispy golden brown.

Next, the stacking begins. Each baked eggplant slice gets topped with Paleo cheese, tomato and fresh basil. This Paleo cashew cheese is something I recommend again and again for its versatility. I’ve used it in pizza, quesadillas and pasta recipes. For this recipe, pour the cheese mixture into a small round bowl, about the size of a large tomato or ¾-cup measuring cup. This allows the Paleo cheese to solidify in a circular shape, perfect for topping the eggplant. Finally, finish with a drizzle of olive oil and balsamic vinegar and you have a dish that’s a sure crowd pleaser!

Jennafer Ashley
These baked eggplant Caprese stacks make the perfect appetizer or side dish. Coated in almond meal, they're baked for a crispy and comforting dish.

Dark Chocolate Bacon Brownies
Next Post: Collagen: Benefits & How to Cook, Bake and Drink It