Like many other doctors and health experts, I believe that all health begins in the gut. This point hit close to home when my mother was diagnosed with cancer. However, by focusing on healing her gut, we were eventually able to kickstart her natural healing. (She’d also suffered from chronic constipation for many years.)

Like my mom, many people are currently suffering from diseases and health conditions that can ultimately be traced to leaky gut. It’s a condition that occurs when the intestinal lining becomes permeable, which allows toxins, undigested food particles, and other foreign invaders to enter the bloodstream. [tweet_quote] Eating dirt can help re-seal your gut to restore health and wellness throughout your body.[/tweet_quote]

Once outside the gut, these particles travel throughout the body, create widespread inflammation, and cause all sorts of health issues—from skin rashes to autoimmune diseases. In part, this permeability is caused by an overgrowth of bad bacteria, which crowds out the good bacteria that’s known to regulate digestion and the body’s immune system.

Do you struggle with bloating, gas, constipation, or other digestive issues? We’ve created a FREE guide to healing your gut naturally. Click here to get your copy!

In my book Eat Dirt, I outline a five-step process, which will re-seal the gut and restore health and wellness throughout the body. One of the key parts of that process is re-introducing beneficial bacteria that kick the bad guys out for good. These bacteria can be naturally found in soil. But the good news is that you can reap the same benefits without actually eating dirt.

And as in my mom’s case, the benefits extend well beyond the gut. They can include:

Around 80% of the immune system is found in the gut. So it’s no surprise that creating an optimal microbome—with a healthy ratio of good-to-bad bacteria—is the best way to achieve overall health. (The ideal ratio is 85% good/neutral to 15% bad.) Here’s how to accomplish that:

1. Shop at Your Local Farmer’s Market 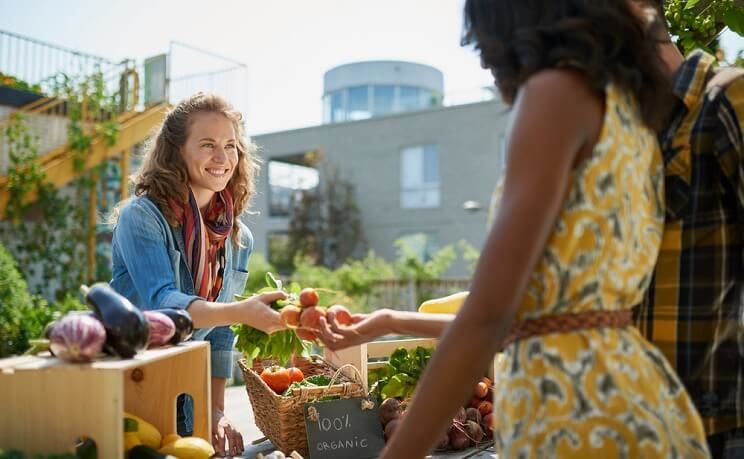 The “eat local” movement has been gaining steam for some time now, and with good reason. The further food has to travel to reach our dinner plate, the greater the chance that it’ll be devoid of nutrients—and sprayed with harmful chemicals and pesticides that’ll keep it looking picture-perfect until you buy it at the grocery store. [tweet_quote] Buying organic produce gives you access to health-boosting, soil-based bacteria.[/tweet_quote]

Shopping at local farmer’s markets supports local farmers, and it allows you to eat produce in its most unaltered state. And that’s not all: When you pick up organic produce, you also gain access to the billions of health-boosting, soil-based bacteria that’re still clinging to the roots, stems, and skins of your favorite fruits and vegetables. Your body needs this bacteria to maintain proper digestion and prevent leaky gut.

So how can you ensure that the healthy bacteria make it into your body, and end up where they need to be? Avoid scrubbing your produce with a fruit-and-veggie wash Instead, simply give it a quick rinse with water. 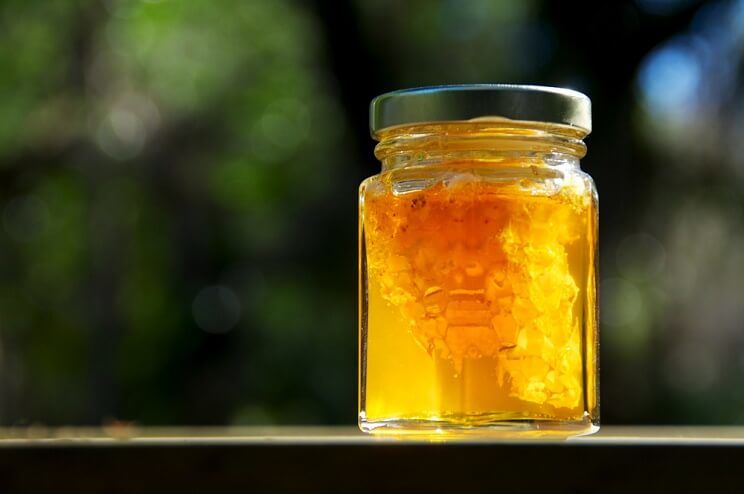 By now, you know how bad sugar is for your health. It’s toxic; it feeds bad bacteria in the gut, and it’s more addictive than cocaine. But that doesn’t mean that you can’t enjoy a little sweetness every now and then.

While it should still be used in moderation, there are many health benefits of raw honey—thanks to the antioxidants, amino acids, electrolytes, and antimicrobial compounds it contains. [tweet_quote] When you eat local honey, you ingest tiny bits of helpful microorganisms.[/tweet_quote]

And as an added bonus, when you consume locally grown raw honey, you’re ingesting tiny bits of local pollen and microorganisms with every spoonful. This immune-boosting power of local honey is powerful. In fact, it’s often recommended as a natural treatment for allergies. 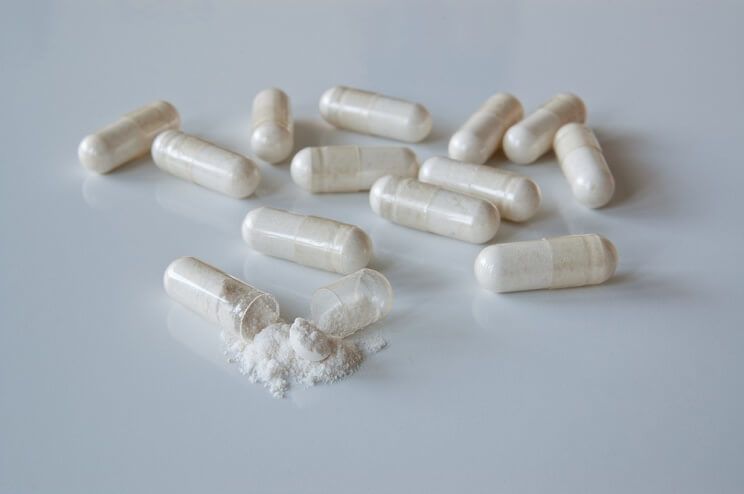 Soil-based probiotics (SBOs) are formulated to mimic the naturally occurring bacteria that our ancestors regularly came into contact with—while they were harvesting their own fruits and vegetables, raising livestock, and generally spending much more time outdoors than we do now. 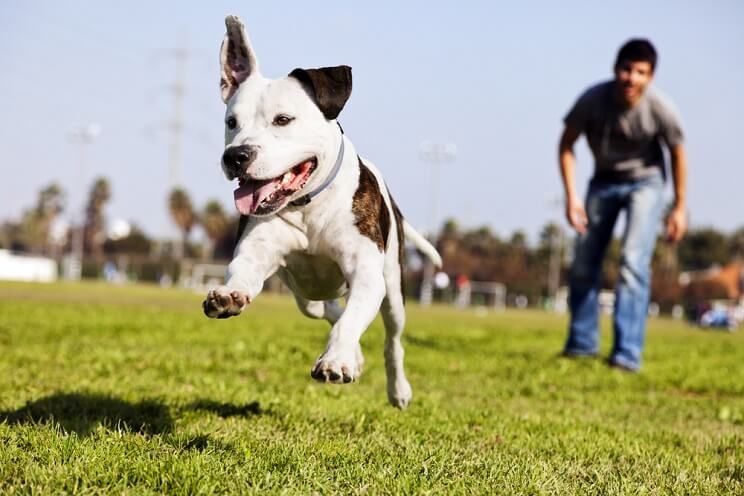 My wife Chelsea and I love to take our dog out for a walk every morning. We stroll along, catching up and discussing plans for the day. Meanwhile, our dog runs around, pausing to roll around in a patch of grass or paw at a spot of uncovered dirt.

Then once we get home, I vigorously pet our dog and give her a huge hug. By doing so, I make sure that all of the soil-based bacteria she picked up on her walk gets on my skin. The skin is the largest organ, and it’s also incredibly porous. So those same bacteria that were on my dog’s fur will eventually end up in my bloodstream. In this case, I’m not actually eating dirt, but it still ends up in my body. 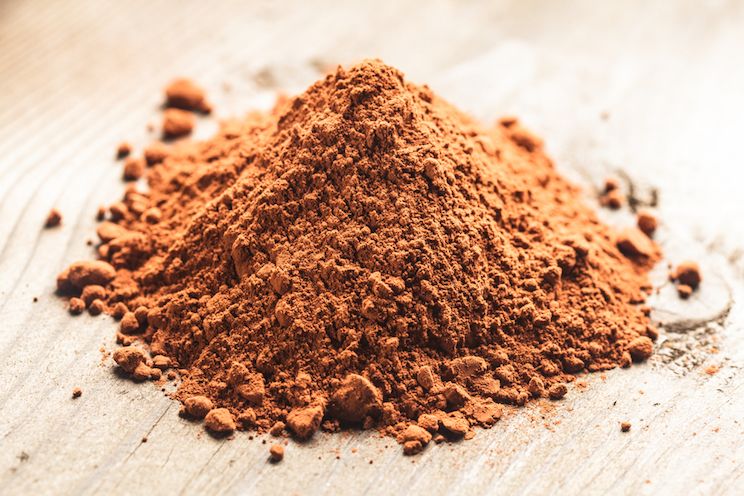 You may not have heard of fulvic acid, but it’s been around since the beginning of time. It’s an organic compound naturally found in dirt, rock sediments, and bodies of water. In the agricultural industry, it’s added as a supplement to soil to improve crop growth. For humans, fulvic acid is considered the ultimate nutrient booster; it helps the body better absorb antioxidants and other nutrients, improve digestion, preserve brain health, and slow down aging. [tweet_quote] Fulvic acid helps the body better absorb antioxidants and nutrients.[/tweet_quote]

People who follow Ayuverdic healing practices have been consuming fulvic acid for many years. It’s one of the key ingredients in the supplement shilajit. But you can also purchase fulvic acid on its own, typically in liquid or powder form. 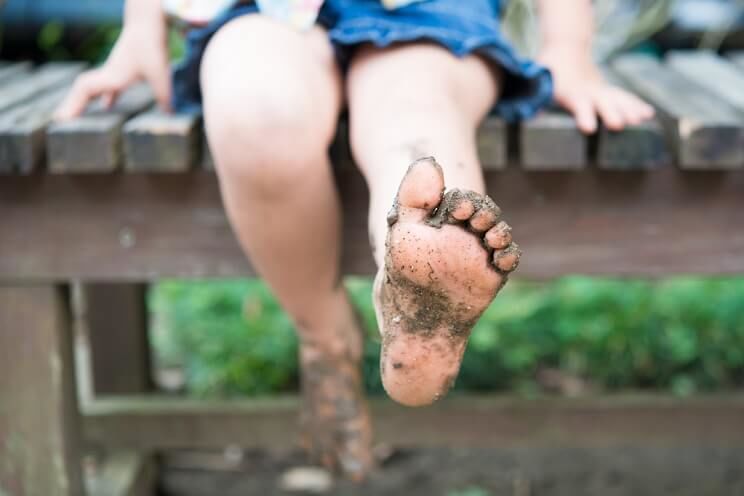 So if you don’t have a dog, how can you come into contact with bacteria and soil-based organisms frequently enough to get them into your gut?

Just the simple act of walking barefoot through grass, on dirt paths, or along the shoreline can provide access to billions of beneficial bacteria and other microbes. Additionally, research has shown that this activity also works to stabilize our internal, bioelectrical environment. In turn, it normalizes many of our natural bodily functions.

It’s officially called “earthing,” but I like to call it an excuse to kick off your shoes and run around outside!

(Read This Next: The 5 Best Supplements for Leaky Gut) 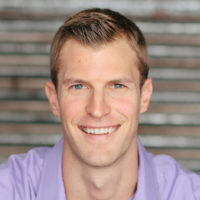 Dr. Josh Axe, DNM, DC, CNS, is a doctor of natural medicine, clinical nutritionist and author with a passion to help people get well using food as medicine. He recently authored Eat Dirt: Why Leaky Gut May Be the Root Cause of Your Health Problems and Five Surprising Steps to Cure It, and he operates one of the world's largest natural health websites at www.DrAxe.com.