During the cold winter season, there’s no doubt this bread pudding is one of our all-time favorites. Full of fragrant flavors, it’s made sweet and tender with coconut oil and almond milk. It has a rich caramel drizzle and goes perfectly with a scoop of coconut cream.

The base of the pudding is made with day-old Paleo bread for a firm texture that soaks up all the added moisture. You can make your bread ahead of time (this Paleo bread recipe is super easy) or find a trusted brand at your local health food store. 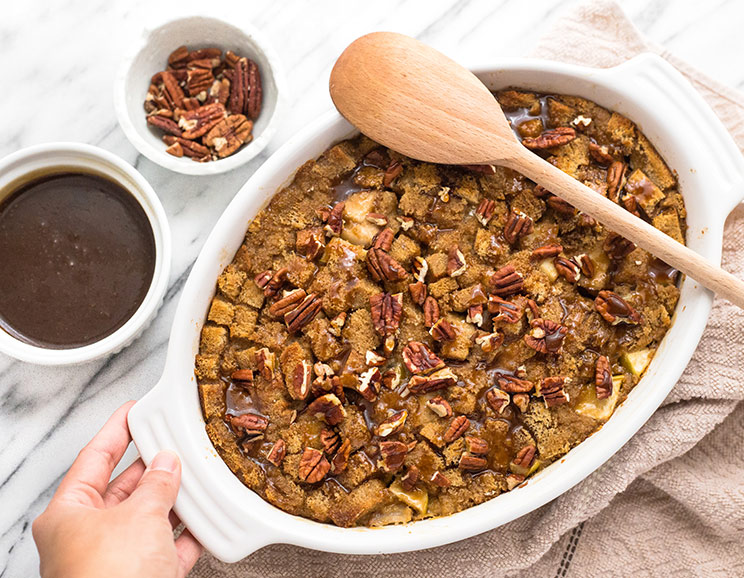 To get started, toss the bread cubes with the melted coconut oil, then fold in the chopped fruits. Transfer the mixture to a greased casserole dish and set aside. Tip: If you want the bread pudding to have more of a buttery taste, simply swap out the coconut oil for equal parts ghee.

In a medium bowl, whisk the eggs, almond milk, 1/3 cup of caramel sauce, coconut sugar, ground cinnamon, and salt together. Pour the mixture over the bread cubes and use a wet spoon to gently press down. Let it stand for five minutes to allow the bread to absorb all the moisture.

Then, bake for one hour or until the top is golden brown and crispy. When finished, top with chopped pecans and drizzle the remaining caramel sauce on top. Allow the bread pudding to cool for at least 30 minutes before slicing. Serve alongside coconut cream and enjoy!

Tip: If you’re feeling ambitious, make your Paleo caramel sauce at home with this easy recipe!

Ask Aimee: Is It Safe to Take Iodine For Thyroid Disease?
Next Post: Epstein-Barr: The Elusive Virus Behind Autoimmunity