Epstein-Barr: The Elusive Virus Behind Autoimmunity

Even if you’ve never shown symptoms, the powerful Epstein-Barr virus can cause chronic problems. Here’s how to tell if you have it – and five supplements that can help.

Imagine a virus so common that more than 95 percent of adults across the world have been exposed to it. While it’s harmless for most people, the Epstein-Barr virus can be the trigger for autoimmune disease and other health issues. (1)

Could this viral problem be the underlying cause of your hard-to-solve health issues?

Epstein-Barr is a viral infection sometimes referred to as EBV or HHV4 (human herpesvirus 4). It’s extremely common and is present in all parts of the world. EBV spreads easily through exposure to saliva and other bodily fluids. (2)

This virus can also cause mononucleosis, or mono, a common illness that tends to occur in older teens and young adults.

Most people who have EBV antibodies, however, probably never had mono and were never aware of having this specific viral infection.

How Epstein-Barr Can Trigger Autoimmune Conditions

We’ve all been exposed to dozens of viral strains that live in dormancy in the body. Every single flu virus and viral-based infection is stored in the body as an antibody. It’s the principle behind vaccines – exposing your body to a strain so that your immune system can mount a quick defense, minimizing symptoms and sickness.

Certain people, however, are more prone to immune problems. Instead of receiving immunity to something like EBV, they experience a recurring virus that can remain active for weeks or months at a time.

Many people will often have more than one chronic condition when they have Epstein-Barr. These include: (3, 4)

How can EBV so effectively cause autoimmune chaos in the body? In people who are genetically prone, the Epstein-Barr virus can switch the immune system into self-attack mode. (5) This happens when certain proteins associated with EBV target genes related to autoimmune disorders.

EBV can also spur immune problems through something known as “molecular mimicry”. In this situation, the immune system is attacking the virus – but it’s also destroying similar-looking organ tissues. 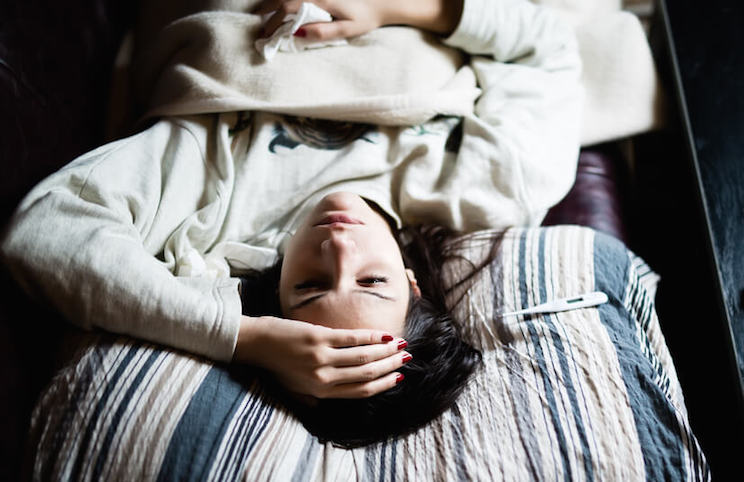 Epstein-Barr can produce several symptoms or only a few, but the major ones include: (6)

Oddly enough, EBV commonly occurs in children but doesn’t produce these telltale symptoms. Most children will contract the virus and show only mild symptoms of infection that quickly blows over. In many cases, immunity develops.

Some adults, however, may have a genetic or immune tendency for Epstein-Barr infections, and may frequently get mono or display mono-like symptoms. Most teens or adults who contract mono or EBV will take between two to four weeks to get better although the fatigue and other symptoms may last for months. (7)

Sometimes it can be hard to get properly diagnosed with Epstein-Barr because many of the symptoms overlap with other common viral infections, like the cytomegalovirus (CMV). The best way to be sure is to get tested for EBV antibodies, but nine out of 10 adults will test positive for these from previous infections. Higher levels of antibodies could indicate a current infection or a chronic infection instead of a dormant infection from an exposure in the past. (8) 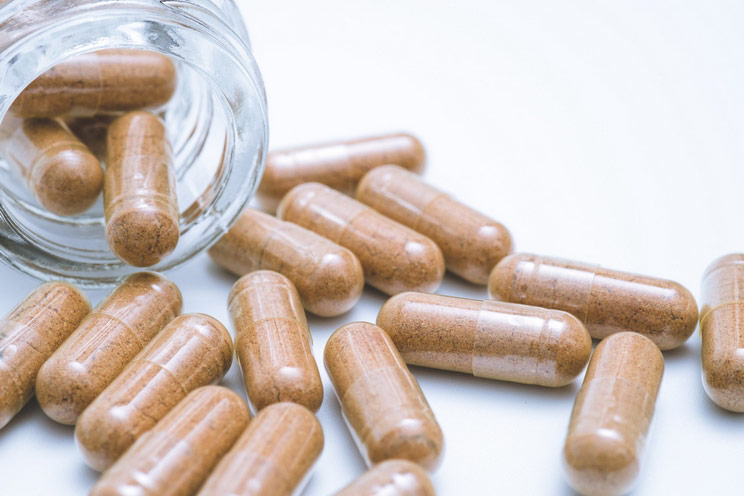 Epstein-Barr cannot be prevented with vaccines. The only true method of prevention is to avoid close contact with someone who is infected. Keep in mind, however, that people with EBV might be able to spread the virus for weeks before they show symptoms themselves. (9)

If you have a current infection of EBV, the best way to address it is to treat yourself like you would if you had any other virus: get plenty of rest and stay hydrated.

If you’re like me and suffer from a chronic, recurring case of EBV, there are certain supplements that can help to address flare-ups and chances of having a recurrence.

As always, never start a supplement protocol on your own, without first consulting with a qualified practitioner. We’re all so genetically unique that nothing can replace personalized advice from your doctor.

When you’re fighting any kind of viral infection, vitamin C helps to activate the immune system to specifically target viral invaders. When taken in high doses, Vitamin C specifically works to shut down Epstein-Barr. (10) Make sure you choose a variety that is free from corn

When paired with Vitamin C, zinc is the one-two punch for all viral infections. Together, they stimulate the immune system into action and stop viral replication. Zinc works to support the production of a certain protein in the body that interrupts the process of viral replication. (11) As a result, zinc decreases inflammation in the body and can also boost antioxidants, which work to build your immune system from being susceptible to another viral invader.

While olive leaf might sound like a meek and peaceful herb, it’s actually a potent antiviral that has been used for hundreds of years. It also possesses antifungal and antibacterial properties, making it a perfect medicine cabinet go-to during cold and flu season. Olive leaf, in particular, interferes with Epstein-Barr’s ability to reproduce, and if a virus can’t replicate, it is forced into dormancy.

Lysine is a common amino acid that works to form antibodies. When a chronic infection occurs, theories hold that antibodies aren’t being formed to fight the infection, because the body is too busy fighting itself. Lysine might help to remind the immune system of what it’s supposed to be doing.

You’re only as healthy as your microbiome, and the immune system is strongly regulated by your gut. Taking a daily probiotic can help to keep your immune system balanced, but it can also help to restore balance. It is especially crucial for autoimmunity where the immune system persists in a rogue state of self-attack.

Epstein-Barr is a common viral infection that most people have been exposed to at one time or another. While most people will never experience any symptoms, a select group of people might have a genetic tendency towards EBV, which can influence other autoimmune conditions or chronic disorders.

While there’s no way to cure a viral infection or an autoimmune disease, certain supplements can help put the infection back into dormancy. 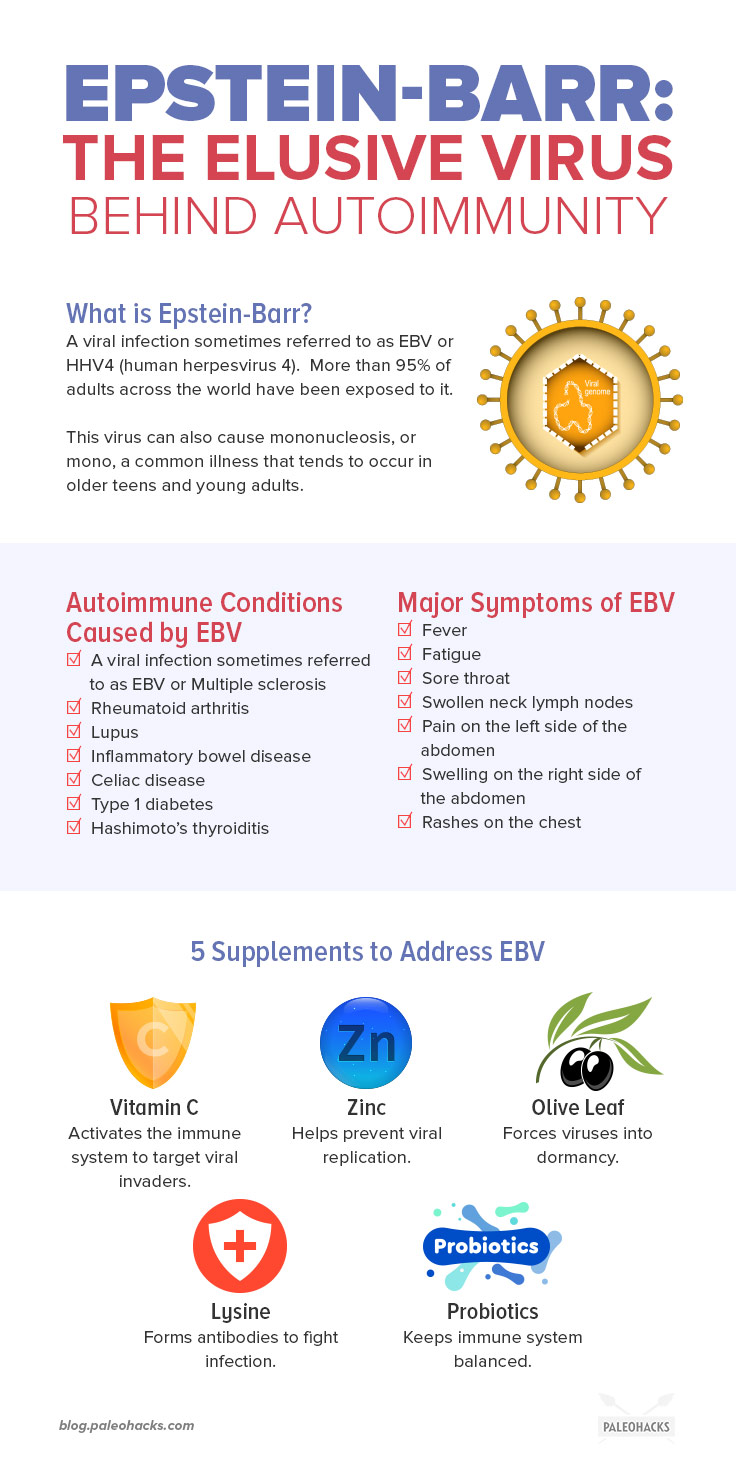 (Read This Next: 10 Ways to Calm an Autoimmune Flare-Up)