The Natural Benefits of Tea vs Coffee

Are you more of a coffee or tea person? Both have amazing natural benefits but coffee often gets a bad rap, while tea has the reputation of being healthier. But is tea really better for you?

No matter where your allegiance lies, it’s easy to find plenty of reasons why your drink of choice is the best option for your health. Every day seems to bring more articles and reports about the benefits of coffee and tea.

Is there one clear winner for a healthier Paleo lifestyle? Let’s get to the bottom of this.

Why People Think Tea Is the Healthier Choice 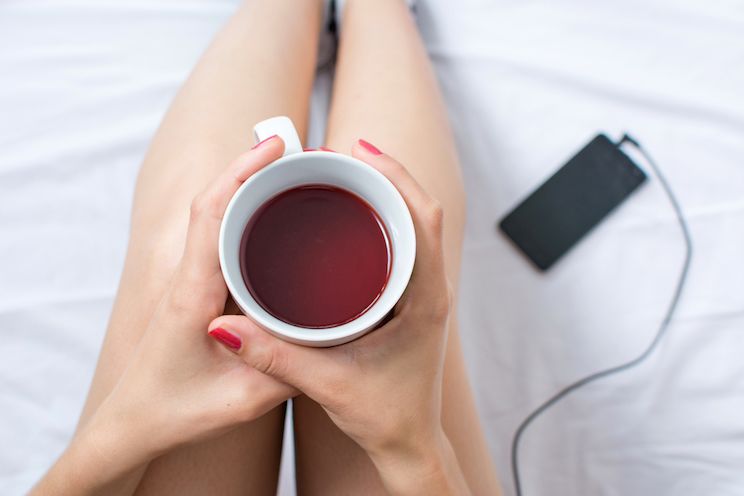 Tea’s reputation is pretty spotless. For decades, even mainstream health organizations have been touting it as one of the healthiest drinks around.

Coffee’s reputation is messier. It reminds me of how many nutritionists turned against eggs, only to change their mind later on. One decade, coffee’s “bad.” The next, it’s “good.”

So it’s understandable if you have the impression that tea is a lot healthier than a little java. But, as you’ll see in just a second, this health showdown turns out a lot closer than many would expect. Coffee might be the underdog, but its potential to improve your health has been underestimated.

You’ve probably heard a ton of different reasons why you should drink coffee, tea, or both. Sifting through all the information and studies can get overwhelming in a hurry.

That’s why it’s easiest to break down different aspects of these drinks and how they affect your health. We’ll compare one factor at a time so you can get a better idea of how they stack up. 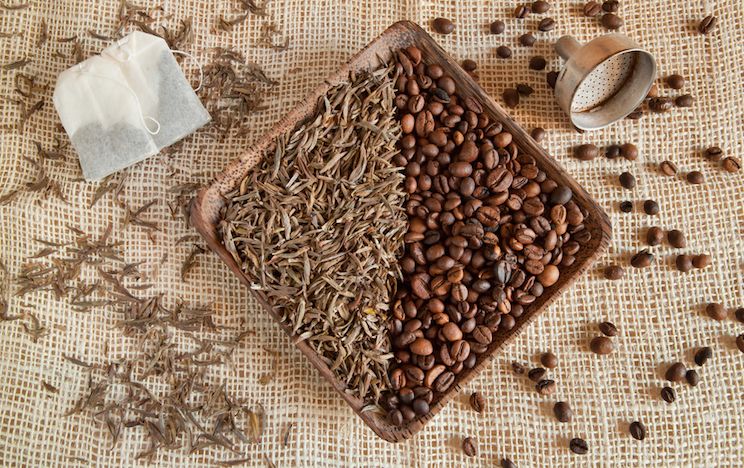 When comparing coffee and tea, taste is probably the first thing that comes to mind.

Coffee comes from different regions around the world, of course, but most of it is strong and somewhat bitter. Coffee is more acidic than tea. That means it can be hard on some people’s stomachs, potentially causing issues like heartburn, acid reflux, or other GERD symptoms. (1) [tweet_quote]Green teas have the highest amount of antioxidants. Herbal teas have a much lower nutritional profile![/tweet_quote]

There are endless varieties of tea, but many come from the same evergreen plant, Camellia sinensis. The end product is different, depending on the extent to which the tea leaves were processed. Green teas are the least processed variety, so they contain the highest amounts of the antioxidants discussed below. But any variety of tea leaves that comes from the Camellia sinensis plant – green, white, black, oolong, etc. – offers a nice antioxidant punch.

Herbal teas actually aren’t made from real tea leaves, but roots and other plants. Drink them if you like the taste (be sure to check the packaging to confirm there aren’t any artificial sweeteners). But don’t expect to get the same nutritional value as you would from tea leaves.

Whatever beverage you choose, make sure you like the taste enough to avoid adding a bunch of unhealthy sugars and sweeteners. Drink your coffee black if you can stand it, or try adding a bit of milk (coconut or almond) and cinnamon. Check out this post for more cool ways to make your coffee healthier. Unsweetened teas are best. 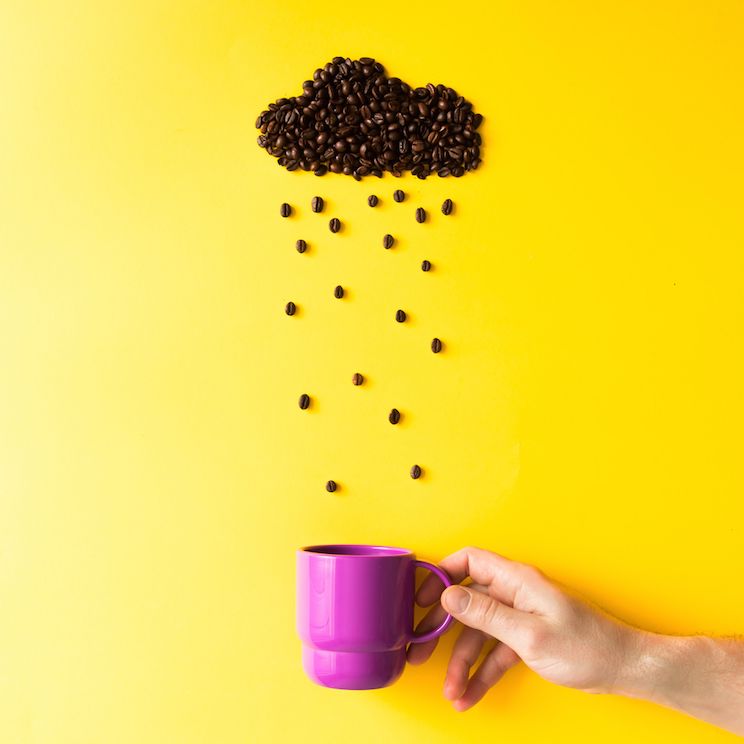 Caffeine gives you energy by blocking adenosine, a neurotransmitter responsible for signaling to your brain that it’s time to rest. (2) It’s the very reason a lot of us drink coffee and tea in the first place. We want that early morning pick-me-up, or a fresh burst of energy when we get sleepy after lunch.

Coffees typically have a lot more caffeine than teas. When you think of a caffeine addict, you probably don’t think of someone screaming because they ran out of green tea. You think of the crazy guy at Starbucks, fidgeting impatiently in the line until he gets the chance to call out, “triple shot espresso!” [tweet_quote]Black teas have more caffeine than green teas. And coffee might have over twice that amount![/tweet_quote]

The typical cup (eight ounces) of brewed coffee contains around 100 milligrams of caffeine. Teas usually range between 15 and 70 milligrams for the same amount. (3) Black teas typically have more caffeine than green teas and other varieties.

A moderate amount of caffeine every day is fine for most people. In 2015, the Dietary Guidelines for Americans report set a guideline of around 400 milligrams a day. (4) Just be careful if you find yourself having a hard time getting to sleep at night, or if you start using your coffee or tea as a crutch to make up for a lack of sleep.

Tea vs Coffee: Which Gives the Better Energy Boost? 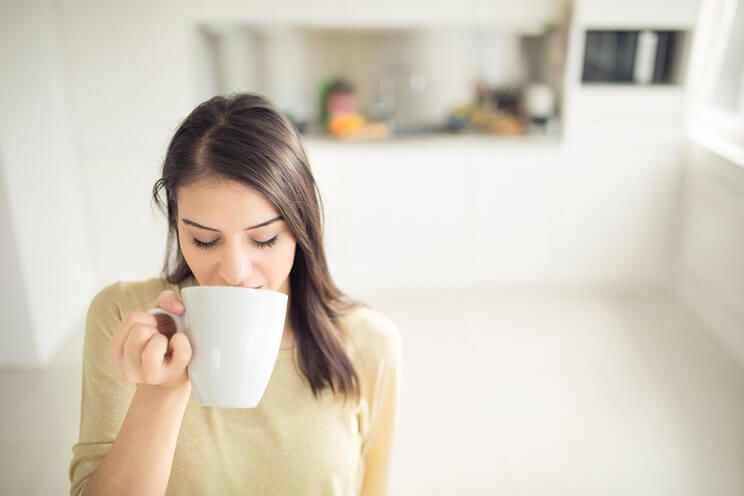 Coffee has around twice the amount of caffeine as tea. But it also affects your energy levels a bit differently.

Coffee is great for that quick jolt of energy, making it extremely popular first thing in the morning. You feel the effects almost instantly, as the caffeine is quickly absorbed into your system. Tea, on the other hand, offers more of a “slow burn” sustained energy boost. You already know it has less caffeine than coffee, so the effect on your body is less dramatic.

Tea also contains an amino acid called L-theanine. L-theanine actually lowers the absorption speed of caffeine into your body. L-theanine is also able to cross the blood-brain barrier and stimulate the neurotransmitter GABA, which has anti-anxiety effects. (5) You end up in an alert but relaxed state. The combination of caffeine and L-theanine can even improve brain function. (6)

You can let your current situation be your guide. Need a quick boost to stay awake on an overnight drive? Try coffee. Want to study for a few hours and stay alert but relaxed? Tea’s the perfect choice. 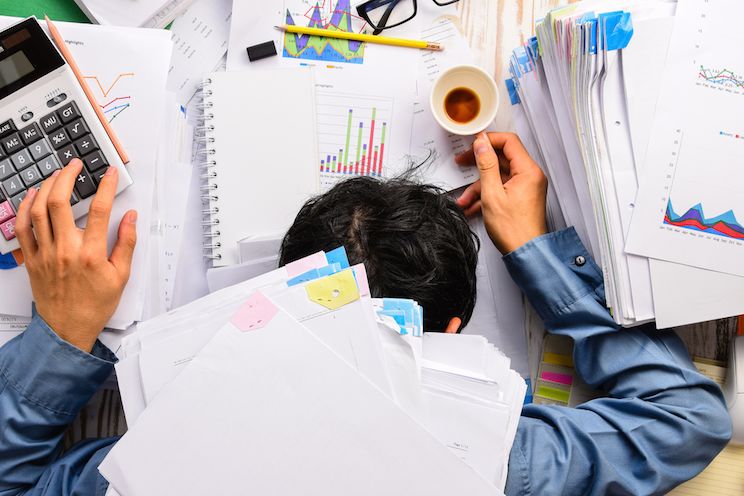 Coffee and tea are great as long as you aren’t having them late enough to interfere with your sleep.

Caffeine affects your body longer than you might think: a half-life between three and seven hours is the norm. (7) You might not feel buzzed anymore, but that doesn’t mean your body still isn’t absorbing caffeine.

Grabbing that extra tea or coffee in the afternoon is tempting. Just be careful. Cutting yourself off at least six or seven hours before your bedtime is a good call.

It’s a bit easier to overdo it with coffee because each cup has more caffeine than the same amount of tea. Researchers at the University of Surrey found that tea drinkers tended to have an easier time falling asleep than coffee drinkers. (8) But there shouldn’t be an issue for you as long as you give your body enough time to process all the caffeine before you wind down – no matter what you drink. 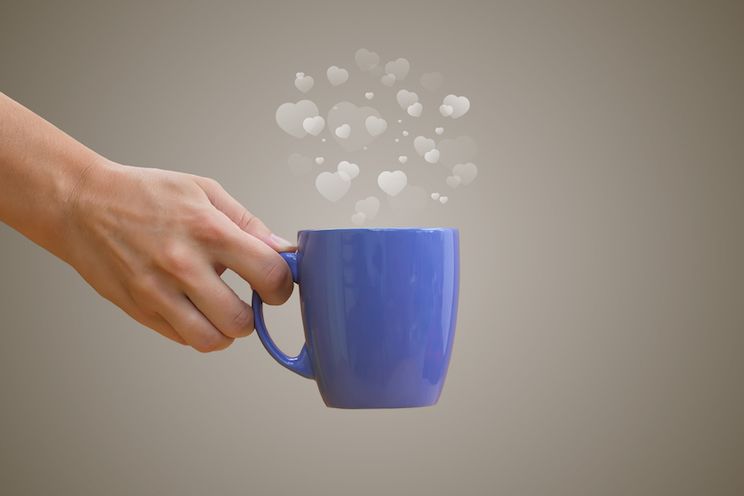 Loads of scientific studies (with more coming out every day) have studied the links between some of the world’s most popular beverages and health. If I discussed them all, I’d end up with a book instead of a blog article!

With that said, here’s a rundown of some of the most impressive ways coffee and tea affect your physical health: 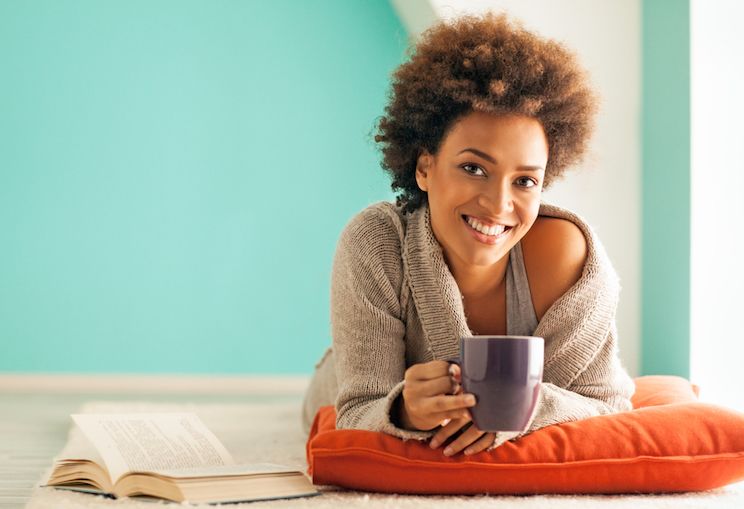 You’re probably well aware of how the caffeine in coffee and tea can help. But there are plenty of other mental benefits unique to each beverage that you might not know about. [tweet_quote]Coffee reduces the risk of Alzheimer’s and Parkinson’s diseases and can help with depression.[/tweet_quote]

Here are some of the most remarkable ones:

Should You Just Avoid Both Completely? 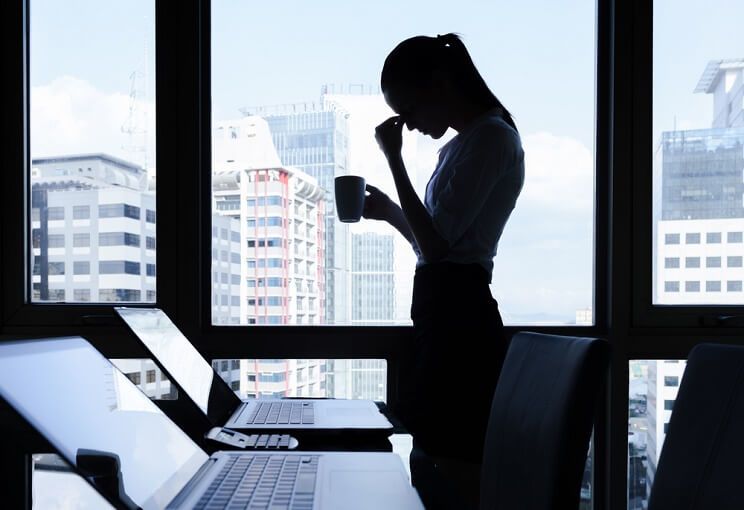 While a few cups of coffee or tea a day are healthy for most of us, there are a few situations when you’d be better off avoiding them.

Take a look at this list and see if any of these describes you:

If you have any doubts whether coffee or tea is right for you, try a 30-day detox. The caffeine withdrawal can be rough at first. But the time without these drinks in your life will give you a perspective from which to assess them more objectively.

If this whole coffee versus tea thing seems a little murky to you, don’t worry!

Bottom line: neither coffee nor tea stands out as a “clear winner” for the healthiest to drink. We’re better off putting this debate to rest and drinking either one, as long as we do so in moderation. [tweet_quote] Coffee and tea can have a place in a healthy Paleo lifestyle. [/tweet_quote]

Those last few words are key: “healthy Paleo lifestyle.” The context matters. Which caffeine source you use matters a lot less than how you use it.

We’ve all met the overweight, sedentary office worker who always has dark circles under their eyes and a giant coffee in hand. That’s when it becomes a problem. When you find yourself using coffee or tea as a crutch just to get through the day – usually to make up for lack of sleep, exercise, and a poor diet – you’re better off avoiding them until you fix your lifestyle.

Now imagine a different scenario, one where someone eats Paleo, makes time for sleep and exercise, and just likes to have a few coffees or teas throughout the day. That’s what you want to aim for.

Finally, there’s no reason to force yourself to drink tea or coffee if you’re sensitive to caffeine or don’t like the taste. As great as those antioxidants are, you can get plenty of them from eating delicious Paleo vegetables.

Coffee versus tea is a lot like politics. It’s easy to get so attached to your party of your choice that you overlook some important issues.

By all means, keep drinking coffee, tea, or both if you want. But the most important thing is to consider how you’re using them. Moderate daily consumption, in the context of a healthy Paleo lifestyle, is safe and even provides some cool health benefits.

Do you prefer coffee or tea? Have you struggled with caffeine addiction in the past? Leave a comment below and share your experience! 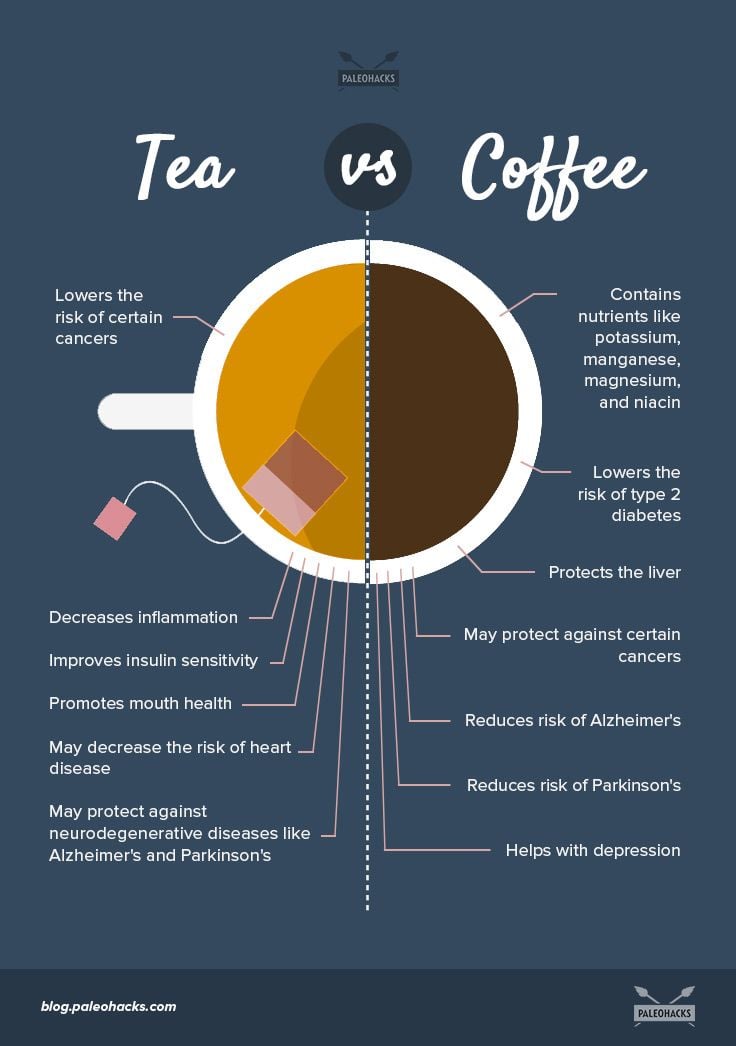 (Read This Next: Could Coffee Help Protect Your Liver From Alcohol?)

Golden Turmeric Latte
Next Post: 21 Exercises You Can Do with a Dish Towel