Fry up some cabbage with thick-cut bacon pieces for a low-carb dish that works as a side or as a main – either way, you’re going to want more.

The best way to eat cabbage is skillet-fried with bacon, because of the slightly crispy edges that form while cooking. I love the taste of charred cabbage, and in this recipe, we’re making it extra tasty by using bacon grease to cook the cabbage.

I highly recommend using a cast iron skillet because it cooks more evenly, but if you don’t own one, any nonstick skillet should do the job.

Use Grass-Fed Bacon Instead Of Conventional Bacon

Opt for grass-fed bacon over conventional bacon because pork raised outdoors on a high-oleic acid diet (versus pork raised indoors on a corn or soybean diet) tends to have better omega-3/omega-6 ratio and a higher percentage of monounsaturated fat. It’s a better nutritional option, and also more sustainable. 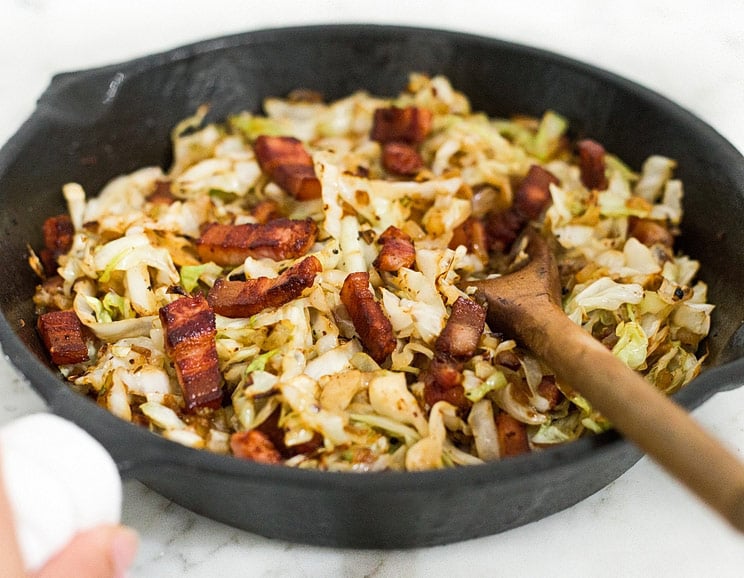 Save The Bacon Grease

One of the things I love about cooking with bacon is that you don’t waste anything. I always reserve the rendered bacon grease to cook the rest of the ingredients because the bacon grease imparts a flavor that takes the dish to the next level.

Helpful Tips To Get You Started:

Felicia Lim
Fry up some cabbage with thick-cut bacon pieces for a low-carb dish that works as a side or as a main - either way, you’re going to want more.

Enjoy even more cabbage recipe like these Asian-style cabbage wraps and this creamy Paleo coleslaw.

32 Anti-Inflammatory Breakfast Recipes Worth Waking Up To
Next Post: Use This 10-Minute Morning Yoga Flow to Balance Your Thyroid