Slice into this easy no-bake apple tart for a treat that’s gluten-free and rich in flavor!

Here’s a no-bake recipe for a delicious, and easy, apple and cinnamon tart. Brimming with naturally sweet flavors, this foolproof treat is something everyone will love. With just 30 minutes of prep time, it’s big enough to share with your entire family and friends.

Made completely gluten-free, this tart has a protein-rich crust with an almond flour base held together with coconut oil and maple syrup. For the rich center, a mix of crunchy apple slices and cinnamon apple purée create a heavenly filling. 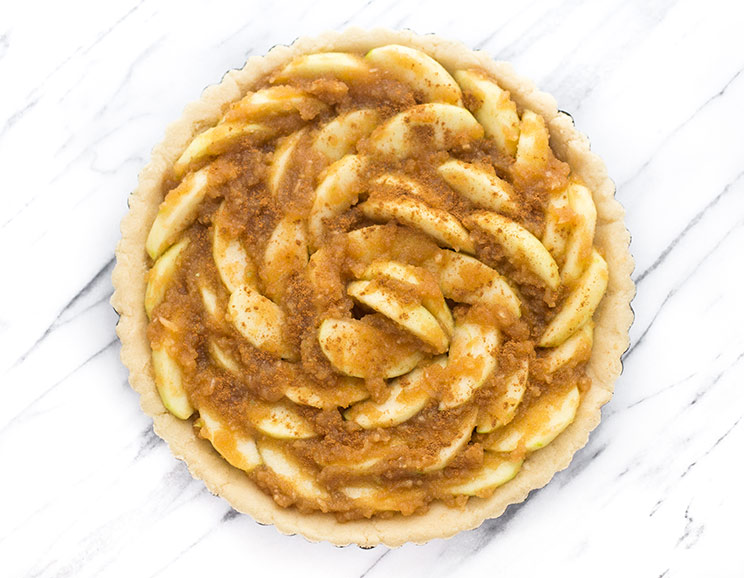 To get started, prepare the crust by combining the almond flour, maple syrup, salt, and coconut oil in a large mixing bowl. Mix well with a wooden spoon until you get a homogeneous sand-like mixture. Then, press this mixture down onto a greased tart pan with a removable bottom. Let it chill in the refrigerator for one hour, or until the crust is firm.

Next, process half of the sliced apples together with one teaspoon of cinnamon in a blender. Pulse until you get a thick, brown purée. In a large bowl, combine the purée with the rest of the apple slices, maple syrup, and remaining ground cinnamon. Mix well until evenly distributed and transfer the filling on top of the tart crust. Arrange the apple slices to create a spiral pattern, then let the tart chill for another hour. Remove from the refrigerator and slice to serve. Bon appétit!

Tip: This recipe uses maple syrup to keep things vegan-friendly, but you can easily replace it with raw honey if you’re not following a strict vegan diet.

Felicia Lim
Slice into this easy no-bake Apple Tart for a treat that’s gluten-free and rich in flavor.
Tools
Ingredients

Zucchini Butter with Garlic and Pepper
Next Post: 10 Morning Stretches You Can Do in Bed