It seems like such a simple thing, but it’s a bundle of confusion for people concerned with their health. Cultures around the world cherished it for thousands of years, some even fighting wars over the precious mineral.

Yet now salt is consistently demonized as unhealthy, one of the most dangerous foods you can eat. This dietary villain has been blamed for causing serious problems like high blood pressure, heart disease, and even strokes.

Should salt have a place in your diet?

Let’s take a trip down the rabbit hole and found out! 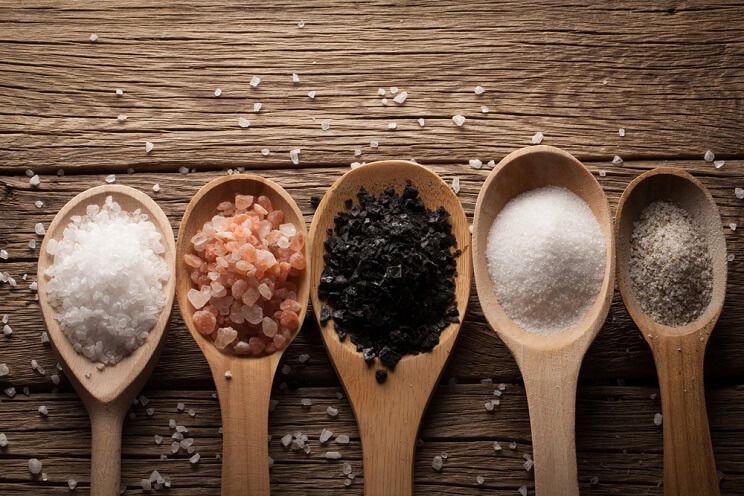 It seems like everyone has a different opinion about salt. Some people use it liberally; others avoid it like the plague.

For some serious Paleos, just the fact that our ancestors were eating hardly any salt (at least in the forms it’s consumed in today) is reason enough to avoid it.

But just because something might not be technically “Paleo” doesn’t mean we should write it off. Mattresses and the Internet aren’t Paleo either, but that doesn’t stop us from using them!

The best course: use science to assess the health pros and cons to determine whether it should have a place in our modern lifestyles.

Is Salt Bad For You? 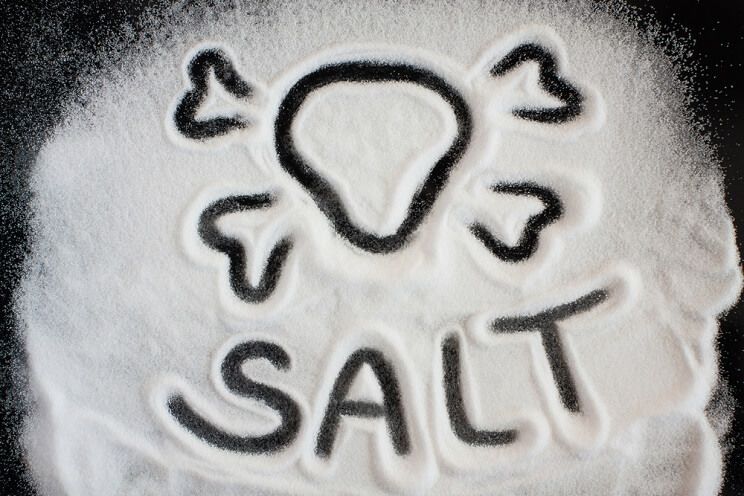 The most common criticism against salt is that too much of it raises blood pressure, in turn elevating your risk of having a heart attack or stroke. But, this isn’t exactly true! Research shows that sodium reduction only has a modest impact on blood pressure (and cardiovascular outcomes). [tweet_quote] Too much salt can lead to hypertension. But the average Paleo eater shouldn’t be concerned. [/tweet_quote]

We’re supposedly eating much more sodium now, which explains the higher rates of hypertension and heart disease. That’s how the story goes, anyway. Yet the average American consumes around 3,700 milligrams of sodium per day—an amount that has remained consistent for the last 50 years (1)!

So it’s not as simple as “high sodium intake causes high blood pressure.” There are plenty of other factors to think about. Everything from physical activity and stress levels to alcohol consumption and age. Recent studies published in the New England Journal of Medicine suggest that blood pressure might be more closely tied to potassium intake (3). 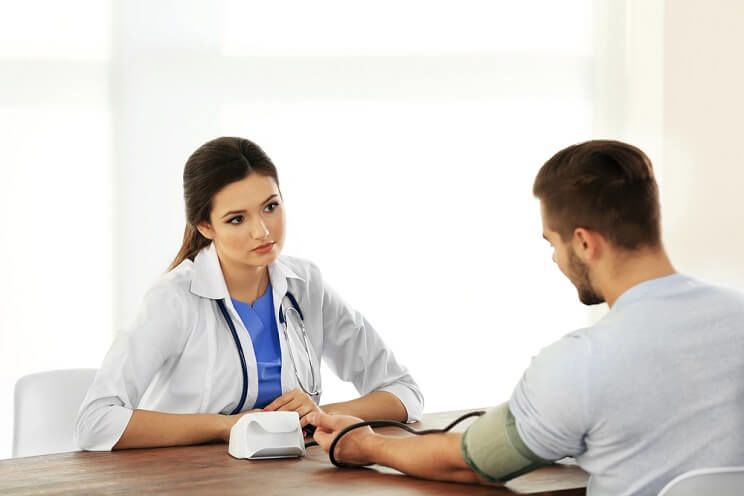 Here’s something a lot of people don’t think about.

Too little salt intake can cause serious problems because sodium is an essential nutrient. We need at least 500 milligrams a day just to stay alive (4).

We usually find salt in the blood and lymph fluid because it helps your body maintain the plasma volume needed for your metabolism to function. In addition, it helps with “tissue perfusion” (the process by which your body delivers blood to capillaries in the tissue) (5).

Salt also helps with digestion because chloride ions (most people forget that salt consists of sodium and chloride) are secreted in gastric juice as hydrochloric acid, which helps to break down food (6).

Sodium is an electrolyte, too. That means it helps maintain a normal pH level in the blood, regulates the amount of water in the body, controls muscle contractions, and much more (7).

How Much Salt to Eat 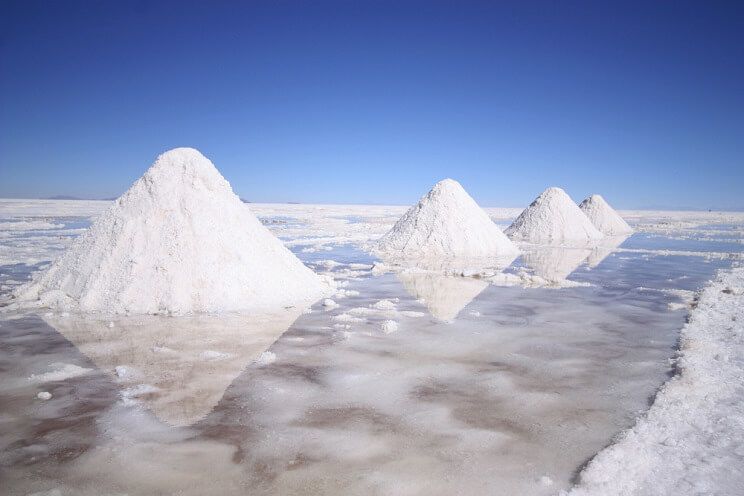 The USDA recommends no more than 2,300 milligrams of sodium daily (8). The American Heart Association is even stricter, saying that 1,500 milligrams a day is “desirable” (9).

Like many other nutrients, there seems to be a “Goldilocks amount” (not too little, not too much)—a range where we can thrive.

This is backed up by research. A 2014 meta-analysis found that mortality and salt intake formed a U-shaped curve (10). Mortality rates increased with both very low and very high salt intakes, but fell off in the middle.

If you are very physically active and sweat a lot (endurance athletes in particular), you can consume an amount at the high end of that range.

Deciding Which Kind of Salt to Use

Even when you aren’t afraid of a little salt, you’re faced with another dilemma.

You have to decide which type of salt to eat. This can be more challenging than you’d think, especially when salt’s place on grocery store shelves seems to be getting consistently longer as new varieties are introduced.

Let’s take a look at some of the most common kinds around and weigh the pros and cons.

Iodine is often added as well, and has been done so in the United States since the 1920s to help prevent goiters. The Salt Institute says that about 70 percent of table salts are iodized (13).

Table salt is the cheapest salt around, but it’s also the most processed and stripped of trace minerals. There are better options available.

Sea salt is made by evaporating seawater and collecting the salt that remains.

It’s mostly sodium chloride (like table salt), but it also contains other trace minerals like potassium, iron, and zinc. Just how many of these trace minerals (and in what amounts) depends on where the sea salt is harvested and how it’s processed.

Sea salt is usually less ground than refined table salt, leaving it with larger crystals and a more intense flavor.

Celtic salt is a type of sea salt that originally became popular in France. It’s harvested in the Brittany region from the Celtic Sea.

This salt is much less processed than table salt, as many producers use hand raking to collect it. Celtic salt is grayish and also contains a bit of water, so don’t worry if you buy some and find it’s a bit moist!

Fleur de sel means “flower of salt.” It’s a gourmet sea salt sourced from the Atlantic Ocean in the Brittany region of France.

Most fleur de sel is collected by hand with a rake because the crystals are incredibly fragile. The light processing also helps preserve trace minerals.

Fleur de sel harvesting always occurs in the summer, when harvesters collect the young crystals which form on the surface of salt evaporation ponds. This gives them a nice ocean smell. Because of its fragility, fleur de sel isn’t used for seasoning dishes since it melts and deteriorates at high temperatues. Instead, try sprinkling it on a dish right before you eat it. This works on everything from asparagus, dates wrapped in bacon to cake!

Alaea salt is a coarse, unrefined sea salt with a distinct pink/brownish color. Harvesters collect it by hand from Hawaiian salt ponds, the beds of which mix with red alaea volcanic clay.

Flaked sea salt has a completely different crystal shape than other sea salt varieties. You’ll find it in soft pyramid-like flakes, which makes it dissolve quickly when heated. These flakes are dry and usually sparkly.

Because of its delicate nature, flaked salt is another great “finishing salt” that goes great on freshly cooked seafood and vegetables. It’s easy to take a pinch in your fingers, crush it between them, and sprinkle it on.

Harvesters filter and boil seawater until the salt crystallizes on pans before removing it by hand. The process removes impurities without stripping all the trace minerals.

One of the most popular brands is Maldon, named after where it’s harvested on England’s Essex coast.

Kosher salt was (and still is) used for religious purposes. It helps extract blood from meat, a requirement before it can be eaten.

It has a different shape than table salt, which makes it easier to pick up with your fingers and spread on your food. This makes it extremely popular among chefs!

Himalayan pink salt is harvested in Pakistan from the Khewra salt mines, one of the largest salt mines in the world.

It’s actually a type of rock salt. Rock salt comes from oceans that dried up millions of years ago and left their salt behind, where it was compressed while submerged in the earth’s crust.

Himalayan pink salt crystals are hard and dry—great if you like using salt grinders. That can make for an intense flavor. They also contain a laundry list of trace minerals (15). The iron oxide gives the salt its distinctive pink color. 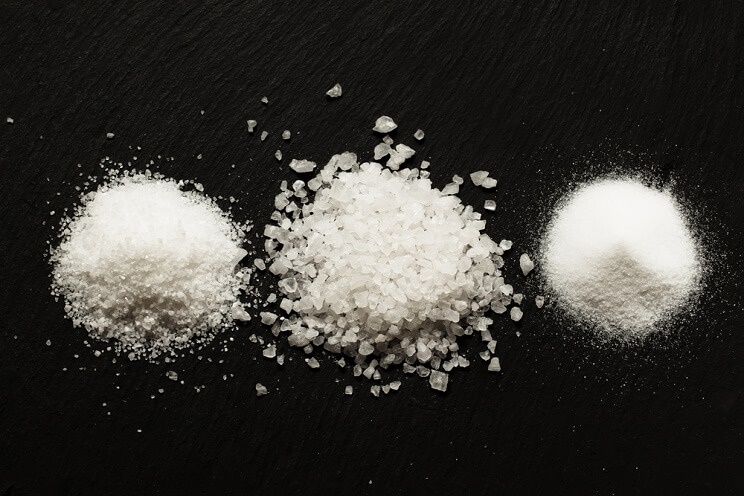 Most of us Paleos shouldn’t be too concerned about salt.

Consider this: processed, pre-packaged foods and restaurant foods make up an astonishing 77 percent of the average person’s daily sodium intake (16). But Paleo steers us away from those foods, so your sodium intake is already drastically lower than average.

According to the CDC, the three biggest contributors of sodium in American diets are bread/rolls, processed and cured meats, and pizza (17). You probably aren’t eating much of that stuff!

Because you aren’t feasting on sodium-laden foods, you have some leeway to cook with salt and use it to season your meals.

Which salt you go with is a personal choice that comes down to a variety of factors. There’s flavor, convenience, and cost to think about. And the texture and shape of the salt crystals determine how they interact with your taste buds and food. [tweet_quote]Choose your salt based on flavor, not mineral content. Just make sure you get iodine through other foods! [/tweet_quote]

Feel free to experiment with any of the natural salts above and figure out which kind you like the best. The differences in trace mineral content between them are negligible, so that doesn’t have to be the deciding factor. Use salt mainly for flavor, not nutrition.

Finally, because most natural salts don’t contain iodine, make sure you’re getting enough from other iodine-rich food sources like fish, seaweed, berries, and eggs.

No Need to Obsess

Salt is one of the most confusing health topics around.

But for the vast majority of us who follow a healthy Paleo diet, it’s not something to obsess about.

The key: stay away from salty processed foods. This frees up plenty of room to cook with salt and use it to season your food to taste. It’s hard to go overboard just doing that.

When all else fails, listen to your body. There could be good reason why you’re craving something salty, especially after a lot of physical activity.

What’s your opinion on salt? Do you try to limit your intake? Which kind of salt do you typically use? Leave a comment below and let us know!

(Read This Next: Truvia: The Pros and Cons of this “Healthy” Sweetener)

Truvia: The Pros and Cons of This ‘Healthy’ Sweetener
Next Post: Hacks to Boost Fat Loss