When you are compiling a list of beneficial foods and vitamins, I’m going to guess that fruits will make your list. And when it comes to health, no vitamin is likely thought of more than vitamin C.

After all, isn’t this why we are all told, ad nauseam, to consume so much orange juice? And when we have a cold what are we told to load up on? That’s right – vitamin C. Since this vitamin is water-soluble, you need a constant supply in your diet in order to stay healthy. But what exactly does your body and mind use vitamin C for? And what foods have large amounts of vitamin C?

Firstly, the name vitamin C itself is interesting. The L-enantiomer form of vitamin C is what is always referred to. This is despite the fact that there is another version, the D-enantiomer form. However this form does not appear in nature. One of the most important functions of vitamin C is for the growth and repair of tissues in your body. This means that it is a very good vitamin to have, both when recovering from exercise, or for general, everyday health.

Lower vitamin C levels have also been correlated with higher waist circumference, higher BMI, and a higher percentage of body fat. Linus Pauling, Ph.D. was a big proponent of vitamin C, recommending mega doses of the vitamin for nearly every symptom and condition. However, time has not proven him correct. Though many of us associate vitamin C with colds and illness, many studies have shown that vitamin C does not prevent colds, and may only slightly reduce the duration of colds. In fact, zinc has been shown to work much better in the latter category. 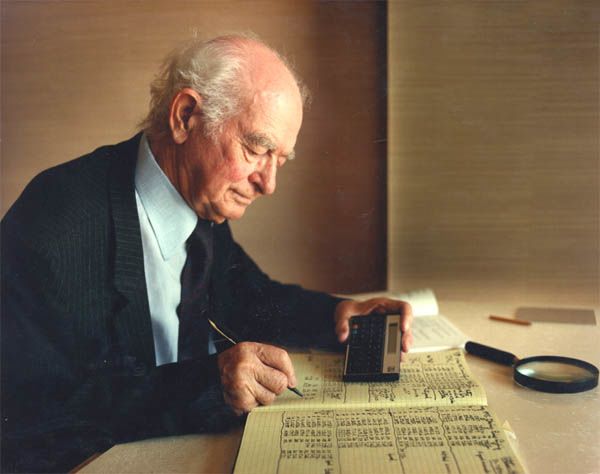 Pauling went even further to postulate that vitamin C could, in his words, cure cancer, or at least prolong survival. This claim was obviously very bold, and was tested vigorously as a result. In one study, Pauling showed that 100 patients who were given 10,000 mg survived 3-4x longer than patients who were not given the supplement. However, there were some study design issues, and this data cannot be trusted.

Later studies unfortunately proved that Pauling wasn’t really onto anything with his vitamin C and cancer hypothesis. This is just one of many examples showing that it is often best to not trust a super food, super nutrient, or trust claims that one specific thing can cure a disease or fix problems. A well rounded diet, plenty of sleep, exercise and trying to limit stress – these are the things you can always count on.

Since we’ve covered the physiologic uses of vitamin C, lets now take a look at the interesting ways in which vitamin C can help with brain functioning. To start with, vitamin C is a vital antioxidant molecule in the brain. Besides this, it also serves a variety of other important functions. It is involved in several enzyme reactions such as collagen production and catecholamine synthesis. The highest concentrations of vitamin C are actually found in the brain. There, it has been suggested that it is involved in a variety of neurotransmitter processes. 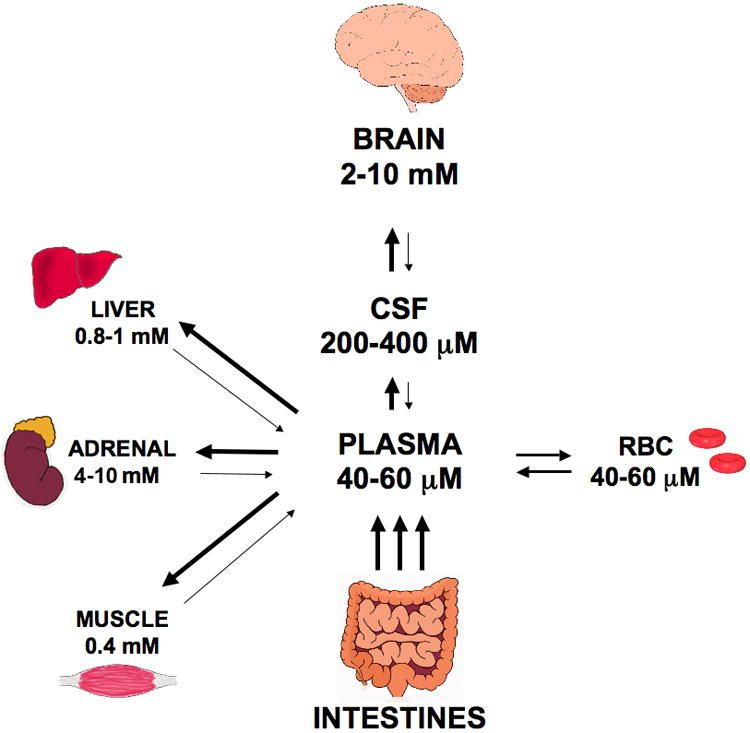 A deficiency of vitamin C is not something you want to encounter, as can be seen in the following graphic. Inferior brain development, acceleration in the aging process, and an increased risk of stroke can all result from levels of vitamin C which are too low. Since vitamin C has an antioxidant effect, it is easy to see why a lack of the vitamin may cause an uptick in the aging process. But how does a lack of vitamin C impede brain development and increase your risk for stroke? 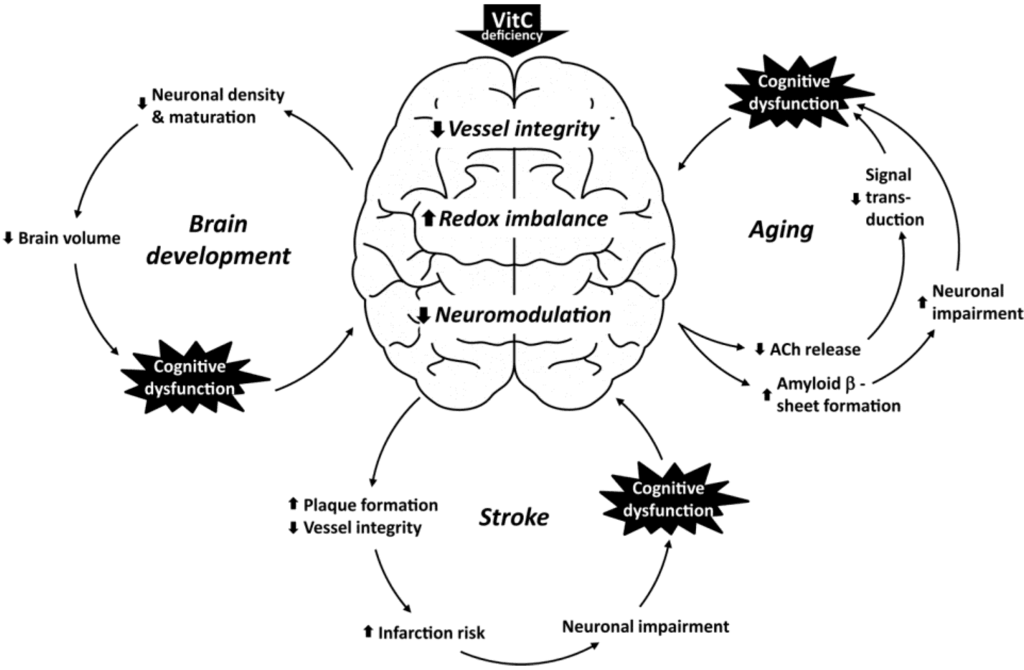 In this study, those with the highest levels of vitamin C had the best protection from having a stroke. Now, before you get too excited, it must be pointed out that there were likely other factors in play, such as alcohol consumption, exercise, dietary habits et al. Remember, there is no one super food or vitamin that can help stop disease. It also must be pointed out that these subjects were not taking mega doses of vitamin C, like Pauling may have wanted.

There are many foods which contain vitamin C. Besides oranges – which hopefully you’re already aware of – papayas, bell peppers, broccoli, brussels sprouts, strawberries, pineapples, kiwifruits, cantaloupes and cauliflower are all very high in vitamin C. In fact, for a mere 30 calories, you can get ¾ of your daily vitamin C requirements from only 1 cup of cauliflower. Pretty amazing! Besides these foods, you can also get a large amount of vitamin C from: kale, cabbage, bok choy, grapefruit, parsley, turnip greens, beet greens, collard greens, raspberries, Swiss chard, tomatoes, lemons, limes, spinach, asparagus, sweet potatoes, winter squash, blueberries, cranberries, carrots, and avocados.

I stopped there, but believe it or not, there are quite a few more foods which contain copious amounts of vitamin C. With this knowledge in hand, it does strike me as fairly odd that vitamin C is so frequently consumed in supplemental form. But from that standpoint, we must realize that many take large amounts of vitamin C, mostly due to the hypothesis put forth by Pauling.

With all the great food sources which contain vitamin C, one must wonder why you would want to supplement. There doesn’t seem to be any need to, especially if consuming adequate amounts in the diet. Nonetheless, the vitamin C supplement market is booming, either with standalone products, or combination products with contain B vitamins and zinc, et al. There are many, many different forms of vitamin C available. Whether it is natural, synthetic, powder, tablet, with bioflavonoids, etc. The end result from all of these products? They all are just as effective. Any difference is marginal, and this intake should be secondary from food, regardless.

For men, 90 milligrams per day of vitamin C is all that is required. No more than that has been shown to be effective. For women, this dosage actually drops to 75 milligrams per day. This amount for either gender should easily be obtainable from food. Acquiring more than this is both unneeded and costly. If you’re looking to help with a cold, zinc would be your best bet.

Were you surprised at some of the misinformation that surrounds vitamin C? We largely have Linus Pauling to thank for that, since vitamin C was his big focus. Many are surprised to learn that vitamin C isn’t a wonderful cure-all that they can take endlessly and expect to avoid all ills. Its ability to help slow aging is highly over-regarded, and instead it is simply an important antioxidant. It cannot help slow cancer, though it is found in the brain in large amounts.

If you have a cold, I wouldn’t run for the vitamin C. I would find a large supply of zinc instead. Vitamin C is however involved in several enzyme reactions such as collagen production and catecholamine synthesis. No doubt it is important. But its importance in terms of overall health have been vastly overstated by the world at large. Remember, there is no one super food, or vitamin, which can cure all ills, and help stop disease. A well rounded diet, plenty of sleep, exercise, and trying to limit stress are the things you can always count on.

How did I do? Did you learn anything about vitamin C? Let me know in the comments!

Why Sunlight Is the Ultimate Health Hack
Next Post: Your First 48 Hours Paleo: 5 Things You Need to Know