Is Coconut Oil “Pure Poison” or a Superfood? A Nutritionist Settles The Debate

While some hail coconut oil as a nourishing superfood, others say it’s a cholesterol nightmare. Our certified nutrition expert breaks down the controversy.

There are two major camps when it comes to coconut oil. Some researchers, like the Harvard professor who called coconut oil “pure poison”, believe its high saturated fat content leads to high cholesterol. Other scientists point out that the structure of the fat makes it beneficial for cholesterol and heart health. (1, 2)

We’re breaking down the debate on both sides, using research-based facts to see the real effects of coconut oil on cholesterol.

First, however, let’s take a look at exactly what coconut oil is and what it’s made of, so we can better understand the arguments.

What is Coconut Oil? 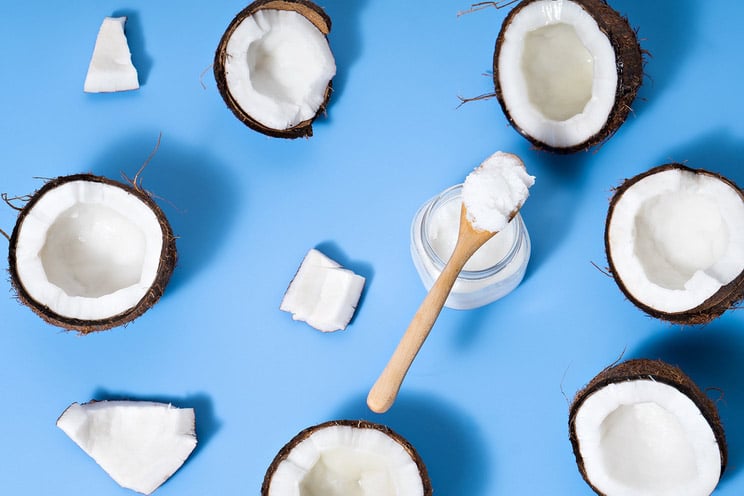 However, these saturated fats are slightly different to other saturated fats such as animal fats. Coconut oil contains a high amount of medium-chain fatty acids (MCTs), which are absorbed for energy more readily by your body. (4) In other words, they don’t stick around in your bloodstream long enough to cause cholesterol trouble.

The Argument Against Coconut Oil

The idea that coconut oil raises cholesterol levels might automatically incite a negative reaction. The problem with this view is that high cholesterol is not necessarily a bad thing.

Other studies show that specific fatty acids in coconut oil, such as lauric acid, tend to raise cholesterol levels. (9) The idea that coconut oil raises cholesterol levels might automatically incite a negative reaction. The problem with this view is that high cholesterol is not necessarily a bad thing. Instead, it’s more important to consider the ratio and type of cholesterol.

Recap of the “coconut oil is bad for cholesterol” debate:

The Argument For Coconut Oil

While there are studies that indicate saturated fat as “bad,” other researchers interpret the results differently.

In fact, long-term studies involving people on low-fat diets versus standard Western diets show that there is no difference in the rate of cardiovascular disease between the two groups on either diet. (11)

Populations that consume a large amount of coconut and saturated fat, such as the Tokelauans and Masai, experience low rates of cardiovascular disease despite “high” cholesterol levels.

Newer research shows that saturated fat can actually improve your blood lipid profile by enlarging your LDL cholesterol molecules. This can potentially lower the risk of heart disease. (12, 13) This is because smaller LDL particles can more easily become oxidized and get lodged in your arteries, increasing the risk of stroke. (14)

Further, saturated fat can improve your cholesterol by also increasing your HDL “good” cholesterol levels, while low-fat diets tend to lower it. (15, 16)

And here’s more food for thought: populations that consume a large amount of coconut and saturated fat, such as the Tokelauans and Masai, experience low rates of cardiovascular disease despite “high” cholesterol levels. (17, 18, 19)

Recap of the “coconut oil is good for cholesterol” debate:

Your mother was right. Too much of anything is never good. Coconut oil may have many health benefits, but that doesn’t mean that you should overdo it.

The basis of the Paleo diet is to include a wide range of healthy fats, meats, veggies, and nuts in your diet, to remove processed foods, and not to concentrate solely on one food source for too long. Even if this source is healthy, it can cause an imbalance in your diet in the long term which can lead to adverse health effects.

Our advice? Use coconut oil the same way you would any other healthy fat: in moderation. Sauté your veggies in it and use it to make homemade dressings and desserts. This will help keep your body in balance. 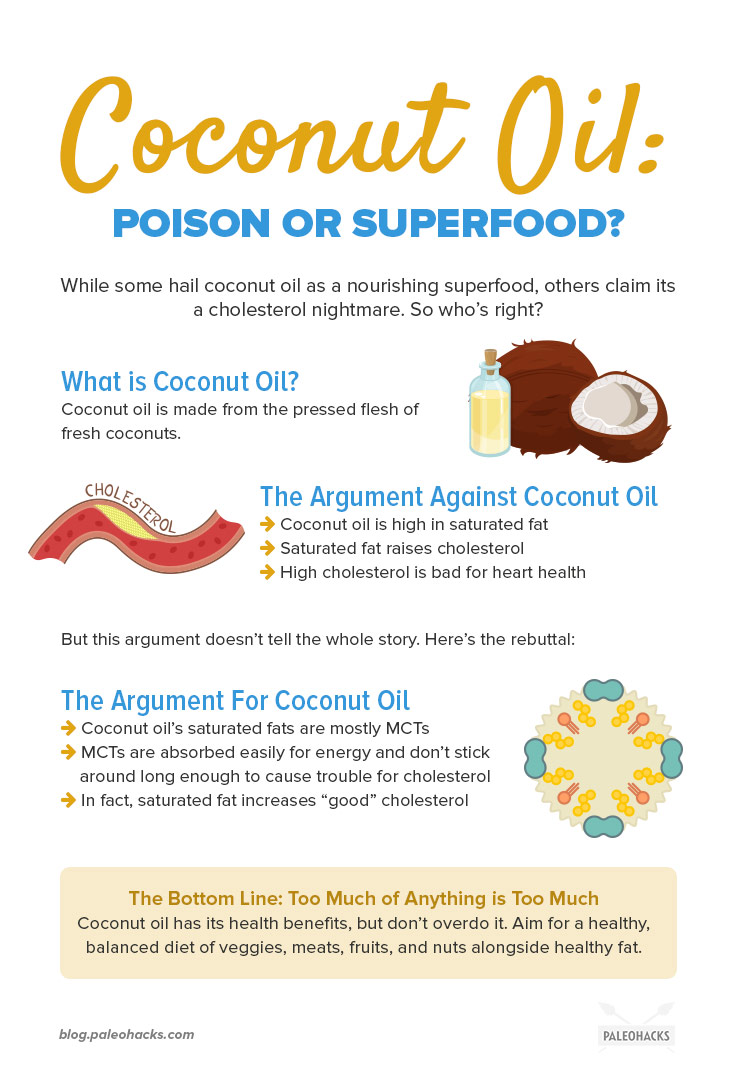 (Read This Next: MCT Oil: What Is MCT Oil and Is It Better Than Coconut Oil?)