50 million Americans are dealing with autoimmune diseases, and in as many as 25 percent of cases, individuals may have more than one. (1,2)

When someone has three or more diagnosed autoimmune disorders, they are experiencing a collective diagnosis known as Multiple Autoimmune Syndrome, or MAS.

What Is Multiple Autoimmune Syndrome (MAS)?

Type I involves diseases that contain a single, pathogenic mechanism. Type II includes inflammatory disorders than can have a systemic impact, like Hashimoto’s thyroiditis, Sjogren’s syndrome, and rheumatoid arthritis. Type III involves a group of autoimmune diseases that have certain genetic mutations in common, particularly HLA B8, DR3, or DR5. These diseases can include Hashimoto’s, Sjogren’s, Addison’s disease, Type I diabetes, lupus, and pernicious anemia.

Factors associated with the development of MAS go beyond genetics, however. Infections, immunologic factors, environmental triggers, and psychological factors can also play a role in the development of one or more autoimmune diseases.

Which Autoimmune Disorders Are Associated with MAS? 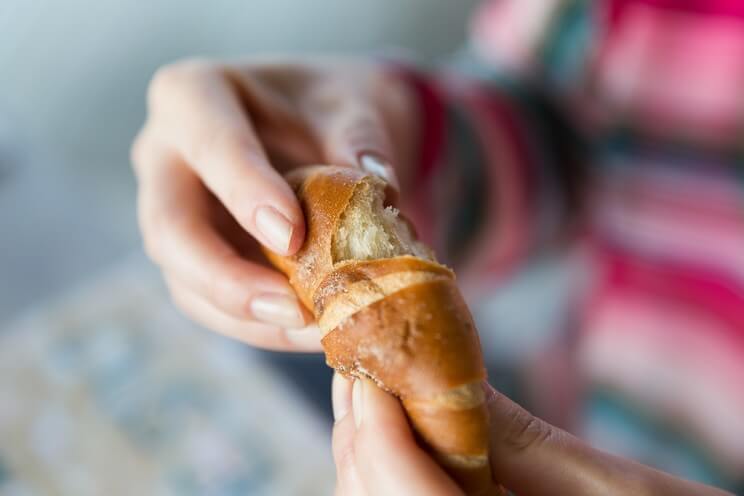 Many of the 80 to 100 known autoimmune disorders can be associated with MAS. Additionally, 40 other disorders are suspected by researchers to also have autoimmune components. (4)

While any autoimmune disorder can be associated with MAS, there are several that are more common, including:

Celiac disease is a condition that develops in response to inflammation and allergic reaction to gluten that is found in wheat, barley, and rye. Approximately one in 200 individuals have celiac disease. (5) Symptoms can include abdominal bloating, intestinal pain, constipation, and fatigue, among other things.

Crohn’s disease is an inflammatory disease that affects the gastrointestinal tract. As many as 1.6 million Americans have this condition. (6) Symptoms include abdominal pain, cramping, blood in stool, mouth sores, and weight loss.

Endometriosis is a chronic gynecologic disease that affects between two and 10 percent of women of reproductive age. (7,8) It involves chronic pain in the pelvis and other regions, infertility, and other symptoms that range from intestinal distress to severe menstrual pain.

Hashimoto’s thyroiditis is autoimmune hypothyroidism and is the most common autoimmune disease that exists. It impacts women seven times more than men, with a total estimated number of cases around 14 million. (9) Symptoms include fatigue, weight gain, lethargy, chronic pain, hair loss, dry skin, and depression.

Multiple sclerosis is a disease of the central nervous system characterized by episodes of relapsing and remission. It is the most common cause of disability among young adults, and impacts more than 400,000 people in the U.S. (10) Early symptoms can include blurred or double vision, tingling in arms or legs, loss of balance, and general clumsiness or lack of coordination.

Rheumatoid arthritis, or RA, is a common inflammatory arthritic condition that impacts approximately 1.3 million Americans. (11,12) Symptoms include tender, swollen, and stiff joints, along with fatigue and loss of range of motion.

Ulcerative colitis is an inflammatory autoimmune disease that affects the colon. As many as 1.6 million Americans are impacted. (13,14) Symptoms include abdominal pain, cramping, rectal pain, rectal bleeding, weight loss, and fatigue.

Gut health is critical when it comes to autoimmune wellness. Since more than 80 percent of the immune system resides in the gut, when it begins to overreact, it is often tied to gut imbalances. Eating to reduce antibodies and inflammation is essential for management of autoimmune disorders, especially when multiple autoimmune conditions are present.

Multiple autoimmune disorders have a strong genetic component, which can also indicate that gut health tendencies can be gained from family and not only lifestyle or diet. (15) Still, while some elements are sealed with genetics, there are still numerous variables that can be controlled with diet, lifestyle, and therapeutic intervention. [tweet_quote] Gut health is critical when it comes to autoimmune wellness.[/tweet_quote]

The gut is home to more than 80 percent of the immune system, including specific organisms that can actually help to modulate immunity. (16) When gut health is compromised or unstable, autoimmunity can proceed unchecked. Regardless of other therapeutic interventions, autoimmunity will not stabilize until the immune environment is no longer flaring.

Protocols to balance gut health and tamp down autoimmune reactions can be somewhat varied depending on the specific disease, but key principles remain the same. 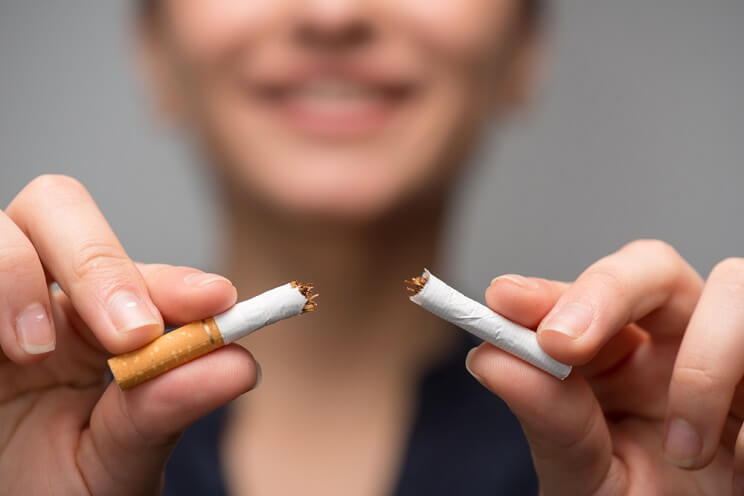 In order to begin gut health repair, triggers need to be removed. They can range from food allergies to chemical exposures to sensitivities to toxins, as well as lifestyle factors that are aggravating (such as smoking, alcohol intake, and poor sleep habits).

Attempts to restore homeostasis, or balance, must first begin by removing the biggest offenders. Repair work will be ineffective if the stressors are still active and present.

Even after triggers are removed, damage needs to be repaired throughout the digestive tract and elsewhere throughout the body where autoimmunity has run rampant. The digestive system responds well to support efforts for repair, and the protocol for healing includes nutrients that boost stomach acid production (leading to improved digestion and absorption of nutrients), as well as nutrients that repair leaky gut walls and promote proper elimination. 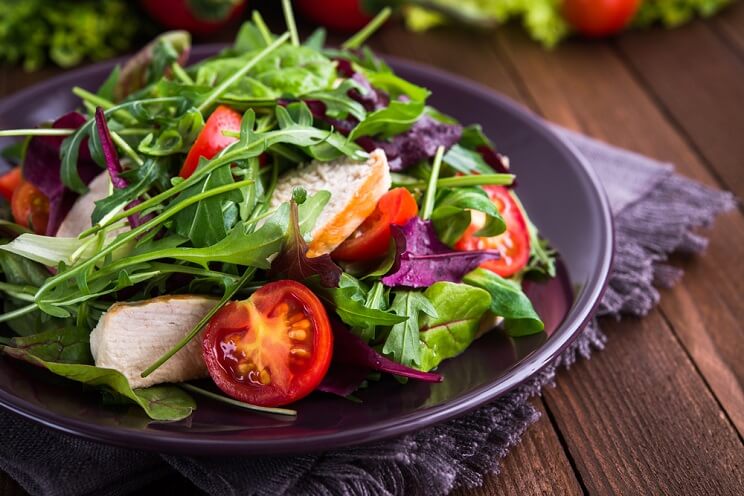 After triggers are removed and damage is repaired, nutrient stores that were depleted during autoimmune flares need to be restored to find balance once again. It is after this phase that some may enter into remission from one or more autoimmune disorders. Most who have autoimmune disease must always live a preventive or restorative lifestyle in order to avoid future relapses. 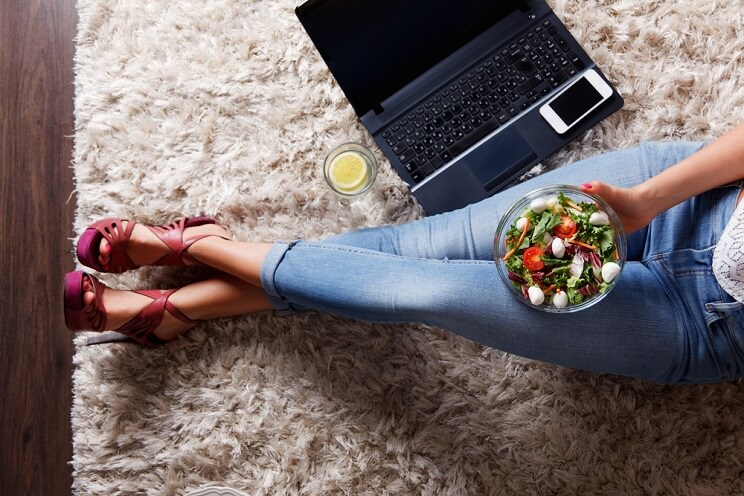 The AIP diet, or the autoimmune protocol, is a version of Paleo that eliminates inflammatory triggers. Since most autoimmune disorders are rooted in inflammation on some level, it makes sense to avoid foods that can trigger inflammatory reactions and potentially worsen symptoms or immune attacks.

While no one-size-fits-all diet approach is best for everyone, the AIP is a good starting point for anyone dealing with one or more autoimmune diseases. Not only does it exclude grains, dairy, and legumes like basic Paleo, it also eliminates nightshades, nuts, seeds, eggs, alcohol, and sugar, leaving a pure and basic diet of meats, seafood, certain vegetables, certain fruits, and spices that help to promote anti-inflammatory reactions within the body. 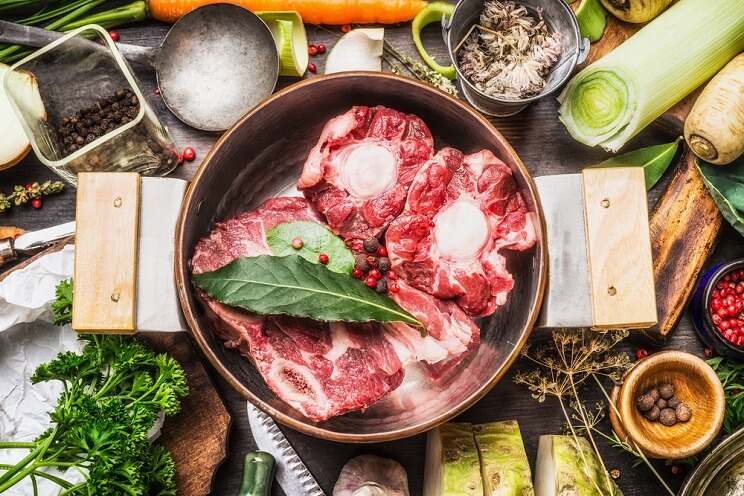 Specific foods that help to fight MAS include:

Rich in folate and other B vitamins that help to nourish the nervous system, leafy greens are well tolerated by most, easy to digest, and promote balanced blood sugar and weight loss for those who need it.

Rich in nutrients that support liver function and detoxification, cruciferous vegetables like broccoli, Brussels sprouts, and cabbage are chock-full of fiber, folate, vitamin K, and vitamin C. These foods can also lead to improved digestion and elimination, and have anti-inflammatory benefits.

Quality proteins are rich in omega 3’s, a potent anti-inflammatory component that can reduce the joint pain that is a common symptom in numerous autoimmune conditions. Bones from pastured meats can also be simmered to create bone broth, a nutrient-rich liquid that contains amino acids and collagen that can repair the digestive tract and lead to improved digestive health.

Salmon, sardines, and tuna are just three of several varieties of wild-caught seafood that can be supportive for autoimmune conditions. Omega 3’s are anti-inflammatory, and the protein found in seafood is more easily tolerated by some individuals who struggle to digest meat or who avoid animal meats for religious or personal preferences. 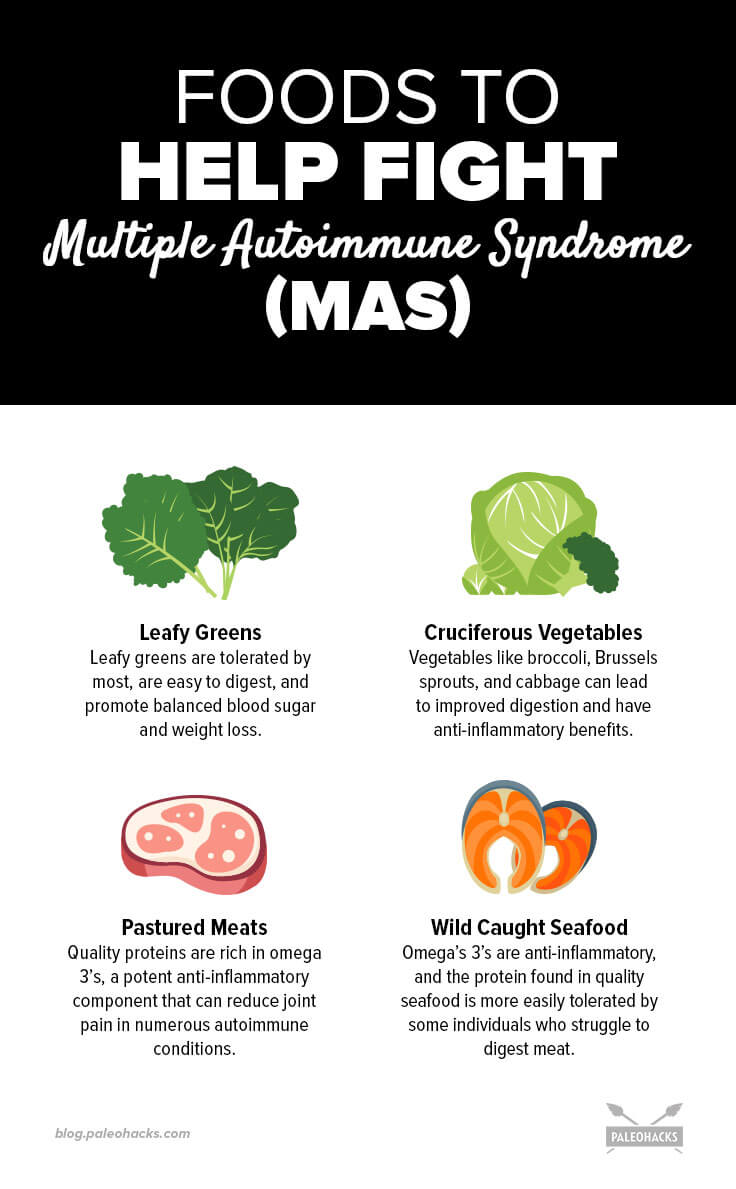 MAS can be overwhelming and life-altering, but when approached from a nutrient-dense diet and appropriate lifestyle support, all of the autoimmune disorders can be simultaneously addressed since many come from similar triggers or root causes.
(Read This Next: Autoimmune Disease and the Paleo Diet)