We’ve been taught that eating carbs first thing in the morning helps boost our metabolism and energize us, which is why the typical American breakfast includes OJ, toast, fruit and oats.

We’ve also been taught to avoid eating carbs at night because they can make us pack on the pounds and sabotage weight loss.

While there’s logic behind this claim (it’s true: our bodies demand less energy when going to bed, which suggests carbs eaten at night will get stored as fat, not used for fuel), research suggests that eating carbs at night may actually promote fat loss. (1) This concept is called “carb backloading”, and it goes against everything we thought we knew about eating carbs.

Can you spare 10 minutes a day? Then you can do this 7-Day Paleo Weight Loss Bodyweight Workout Challenge!
Click here to get your FREE copy! [tweet_quote] Carb backloading is the practice of eating carbs at night for increased fat loss.[/tweet_quote]

Now, as a quick disclaimer before I get into the details of carb backloading: it’s not a method that encourages you to eat potato chips, donuts and ice cream before bed. Instead, we’re focusing on quality carbs here, such as sweet potatoes and coconut flour (and I’ll give you a list of the best sources of Paleo carbs for carb backloading at the end of this article). You’ll also want to avoid refined sugar in general, because it offers no nutritional value and damages your health on many levels. (2, 3)

It should also be noted that carb backloading is designed as a natural way to increase muscle mass and fat burning for athletes, as opposed to being a weight loss program. In any case, carbs are a nutrient that get stored as fat when overconsumed, which is why they should be eaten in moderation (unless you have an extremely high activity level).

What is Carb Backloading and How Does it Work?

You can think of carb backloading as “strategic timing” for eating carbs, based on how your insulin levels naturally fluctuate throughout the day.

Insulin is a storage hormone that helps your body metabolize carbs. Like a “fuel selector” switch, it tells your body when to store carbs as fat and when to store them as glycogen in your muscle tissue. (4) Carb backloading uses this fuel selector switch to its advantage, and recommends eating carbs based on the time of day your body is more likely to use carbs to build muscle and burn fat. [tweet_quote] Insulin is more sensitive in the evenings, meaning you can digest carbs easier at night.[/tweet_quote]

As you can see, according to carb backloading principles, steak and eggs may the favorable breakfast choice for muscle building and fat loss after all.

How Carb Backloading Helps You Lose Fat and Build Muscle 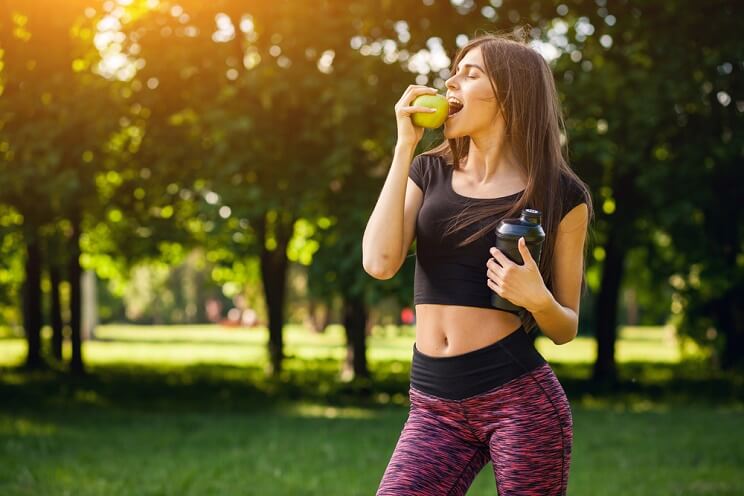 As mentioned above, carb backloading can help you get lean because it takes into consideration when your fat storage hormones are most active.

Simply put, your insulin levels are at their highest peak in the morning, which is when your body is more likely to store carbs as fat. (6) So, ditching carbs in the morning can help accelerate weight loss and allow you to gain more definition.

On the other hand, insulin levels are most sensitive in the evenings and after working out, which is when your body will utilize carbs to replenish glycogen in your muscles and build muscle tissue, rather than storing carbs as fat. (7) [tweet_quote] Try eating carbs about four hours before bed to best replenish your muscles after a workout.[/tweet_quote]

If evening workouts aren’t doable with your schedule, you can still practice carb backloading. If you work out in the mornings, you’ll need to eat a small amount of carbs to replenish lost energy – but it’s still recommended to pair these carbs with a blood sugar balancing nutrient, such as a Paleo protein powder, to prevent excess insulin from being released. Otherwise, your insulin levels will become elevated, which prevents you from being in a fat-burning state.

In addition to building muscle and losing fat, carb backloading can help you sleep like a baby.

Carbs help transport tryptophan across the blood brain barrier, which is an amino acid that gets converted to the neurotransmitter serotonin. (8) Serotonin gets converted to melatonin in the pineal gland – and, as you may already know, melatonin is responsible for regulating your sleep and wake cycle. (9) Since low levels of melatonin are linked to a disrupted sleep cycle, carbs may just be Mother Nature’s NyQuil.

How to Do Carb Backloading 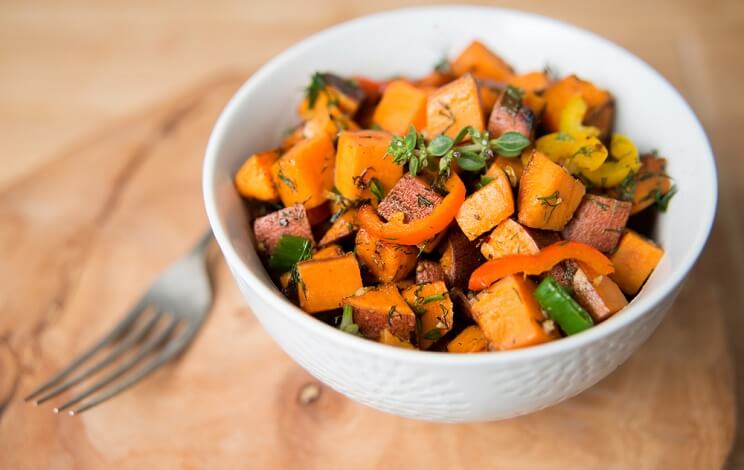 To summarize, the general guidelines of carb backloading are:

1. Eat protein or healthy fats until 5 pm, when insulin levels are highest, which is when you’re more likely to be in a fat-storage state.

2. Eat carbs after a workout to replenish your glycogen stores. To be in sync with your natural hormone rhythms, it’s best to work out in the late afternoon or early evenings. The average athlete only needs a small amount of carbs, while the elite athlete will require a larger serving.

3. If your daily workout is in the morning, have a small amount of carbs (such as a piece of fruit) paired with a protein source. This prevents excess insulin from being released, and also prevents your body from turning on the “fat storage” switch.

4. Eat your carb meal in the evening, approximately 3-4 hours before you go to bed, to encourage muscle building and fat loss.

Some carb backloading experts say small amounts of carbs during the day (after breakfast) are acceptable when carb backloading, as long as it’s less than 30g of carbs, which is the equivalent of one medium-sized banana or two small baked sweet potatoes. When carbs are eaten in smaller amounts, your body releases less insulin, which means the carbs are less likely to be stored as fat. (10)

Carb backloading is most effective for the elite athlete looking to gain muscle and improve athletic performance when training on a regular basis, approximately 4-5 times per week.

This sample carb backloading meal plan is based on doing your workouts at 5 pm and going to bed at 11 pm. 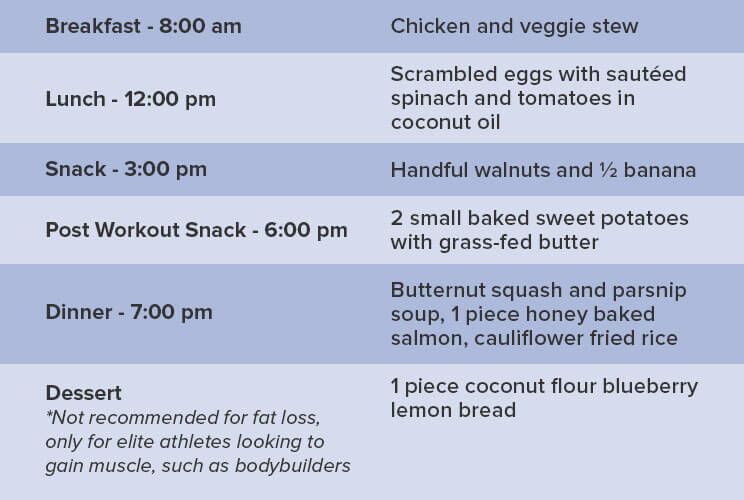 Since grains, beans and legumes aren’t carbs that are permitted on a Paleo diet, the best sources of Paleo carbs for carb backloading are mainly fruit, vegetables and natural sweeteners.

Carbs break down into glucose and fructose. Glucose is your body’s preferred fuel source because it fills your muscle glycogen stores, whereas fructose fills your liver glycogen stores. This is why moderating high sugar fruits and veggies (such as bananas and plantains) and focusing on low fructose foods (such as apples and pears) can be more beneficial for building muscle and losing fat. [tweet_quote] Apples and pears are better for building muscle and losing fat than high sugar fruits.[/tweet_quote]

Here are the best sources of Paleo carbs for carb backloading: