If you’ve heard of Himalayan salt, you may be wondering why health enthusiasts are recommending it. Check out how it differs from other salts and learn whether it’s actually good for you.

People find Himalayan salt, also known as pink rock salt, in Pakistani salt mines approximately 186 miles (300 kilometers) from the Himalayas. The rock is a pale pink color stemming from iron oxide deposits (rust) in the mountains (1). Many people believe it has many health benefits and is the purest salt on earth.

As with all varieties of salt, Himalayan rock salt is most commonly used for cooking. But in addition to boosting food flavor, Himalayan salt helps relieve migraines, increase energy and improve adrenal function.

But Wait… Isn’t Salt Bad for You? 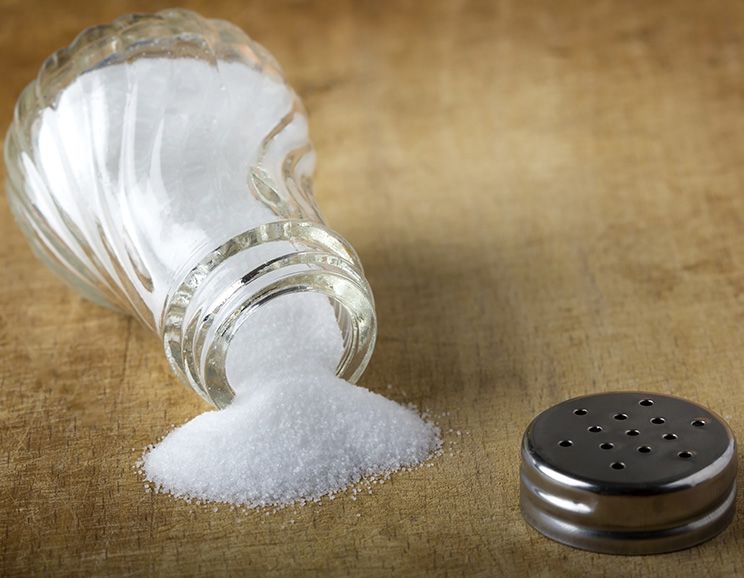 When people consume it in excess, the salt binds to water in their bloodstream and raises blood pressure (3). But the way we consume salt in the Standard American Diet is in the form of highly processed table salt.

How Are Salts Different?

Table salt differs from naturally occurring salt because all of its minerals. Manufacturers strip our natural potassium during the refining process (4). This is damaging to health because it interferes with your body’s natural sodium and potassium balance.

For instance, sodium and potassium work together in a specific ratio to regulate blood pressure. But when sodium levels are too high, they interfere with blood pressure levels being balanced—resulting in hypertension (5). As you can guess, this isn’t a concern with unrefined salt because it still contains potassium. [tweet_quote]Natural salt has all the essential minerals that are stripped away in refined salts.[/tweet_quote]

When manufacturers chemically process and bleach table salt, they add other downsides. This kind of salt may typically contain added chemicals, such as ammonia or aluminum, that are harmful to our health (6). Aluminum is toxic to the body and has been linked to neurodegenerative disorders like Alzheimer’s disease (7).

Therefore, the negative effects of isolating sodium chloride in processed salt gives it a bad reputation. Additionally, it’s easy to overwhelm our bodies with processed salt by eating refined foods at every meal.

But when we remove processed foods from our diet and receive unrefined salt from natural sources, it’s actually good for us. Fruits, vegetables, seaweed, salt water, and salt from the Himalayan rock salt mines, are all examples of natural salt sources. In fact, our bodies depend on it for survival.

Why We Need Unrefined Salt in Our Diets 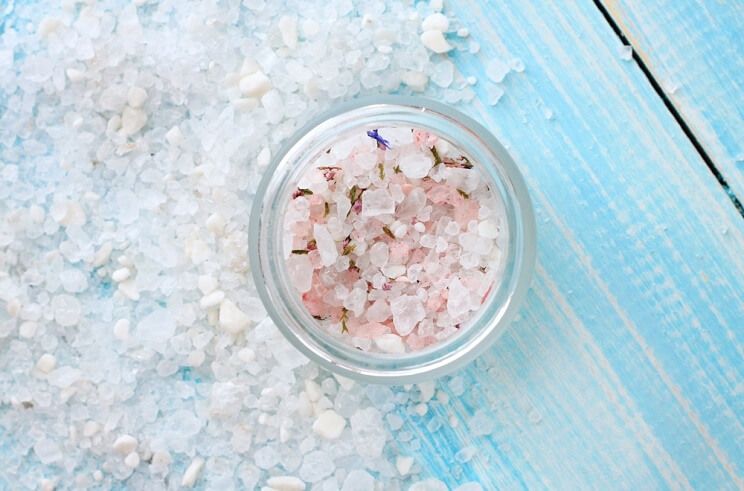 Furthermore, sodium in salt works with potassium. Despite negative associations we have with sodium, our bodies depend on it to regulate muscular contractions. They also help aid in nerve impulses, cardiac function, and maintaining fluid balance in our bodies (8).

Chloride works with sodium to regulate nerve impulses and also plays a role in digestion. When chloride combines with hydrogen, it forms hydrochloric acid in the stomach. This allows us to digest protein (9). Since our bodies depend on protein to form hemoglobin— like red cells carrying oxygen through our bodies—chloride is an element that gives us life.

As mentioned above, unprocessed salt contains several other trace minerals that are needed for health. Things like calcium, magnesium and iodine are just a few of these examples. Perhaps this is why new studies suggest consuming too little salt is actually a greater risk to health (10). [tweet_quote]Himalayan pink salt and other natural salts are vital for organ functioning.[/tweet_quote]

Therefore, when you’re eating unprocessed foods, you’re adding small amounts of unrefined salt to your diet without threatening your health. Instead, natural salt provides your body with several minerals vital to organ function.

The bottom line when it comes to dietary salt is that the source matters.

Many table salt manufacturers chemically produce and strip important minerals out of the final product. Because of this, processed salt is considered unhealthy. Salt from natural sources contains several trace elements necessary to our health. This means salt from nature is healthier.

Now that we’ve briefly touched on the never-ending salt debate, let’s take a closer look at the health benefits of Himalayan rock salt. 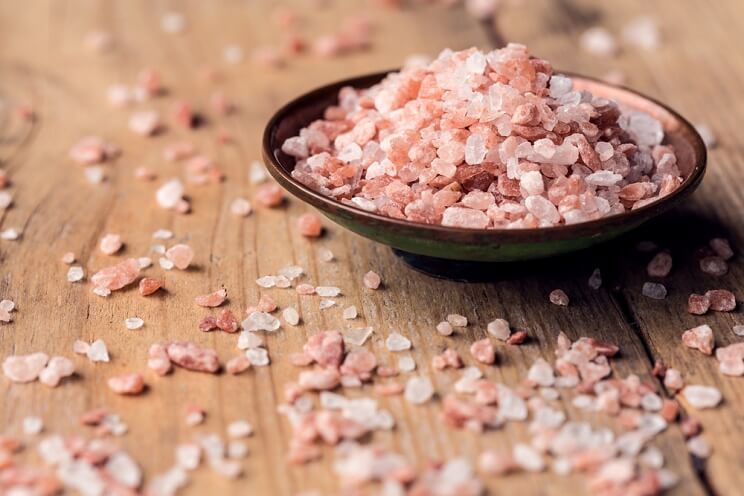 Himalayan contains 84 trace minerals and electrolytes. Some of these minerals include calcium, iodine, potassium, magnesium and iron (11). In fact, Himalayan salt contains triple the amount of potassium, per serving, than Maldon or Celtic sea salt (12).

Himalayan salt contains all six electrolytes we require for health: sodium, potassium, chloride, magnesium, phosphorus and calcium. Therefore, you can replenish your body’s natural supply of electrolytes by adding Himalayan rock salt to your diet. This is especially helpful on hot days or after an intense workout when electrolytes are lost through sweat.

Research links Iodine deficiency to hypothyroidism. It’s a common condition primarily present in countries such as India, Asia and Africa (13). As a preventative measure against iodine deficiency, synthetic iodine gets added back into table salt (also known as iodized salt).

Now, to state the obvious: unrefined salt already contains iodine. So, why not get iodine from a natural source, like Himalayan rock salt?

Your adrenals are two little glands sitting on top of your kidneys. They’re responsible for regulating your body’s stress response by producing the hormones cortisol and adrenaline (14).

Promoting adrenal health is important to preventing chronic fatigue, burnout, and other hormone imbalances — such as hypothyroidism.

Researchers suggest a primary cause of migraines and headaches comes from magnesium deficiency. 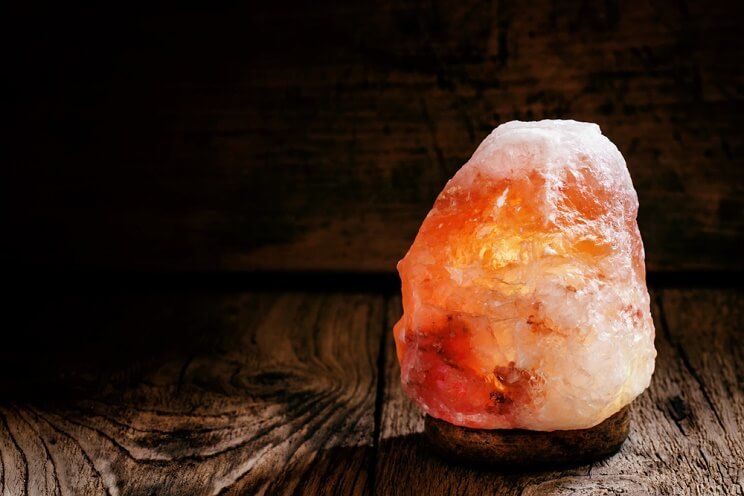 While Himalayan salt lamps aren’t something you eat, they’ve become so popular that they deserve an honorable mention.

Himalayan salt lamps are simply large Himalayan salt rocks with lightbulbs inside them. Although some consider them a new-age hippie trend, people believe it has many health benefits. The soft pink glow of these lamps emits negative ions that cleanse the air. This helps remove negative energy, improve blood flow, promote restful sleep, and boost serotonin levels in the brain.

While these health benefits are certainly appealing, there’s a lack of supporting evidence to back up these claims. But even if they’re a flower-child trend, you’ve got nothing to lose by trying it (except some “negative” vibes).

Himalayan Salt vs. Other Varieties of Salt 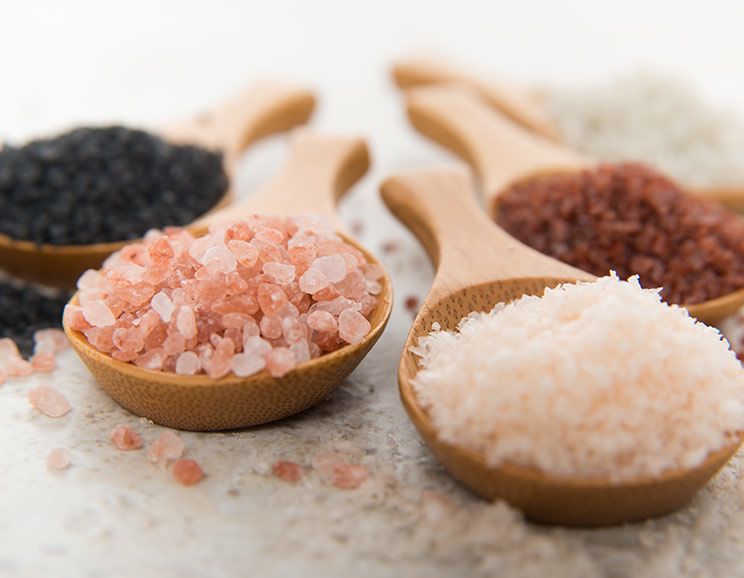 The mineral content of Himalayan rock salt is what makes it so appealing. But is it any better than other varieties of natural salt—such as Celtic or Maldon sea salt?

Maldon sea salt is higher in sodium than both Celtic and Himalayan salt. It’s also low in potassium, magnesium and iron — making it the less favorable choice.

Where to Buy Himalayan Salt 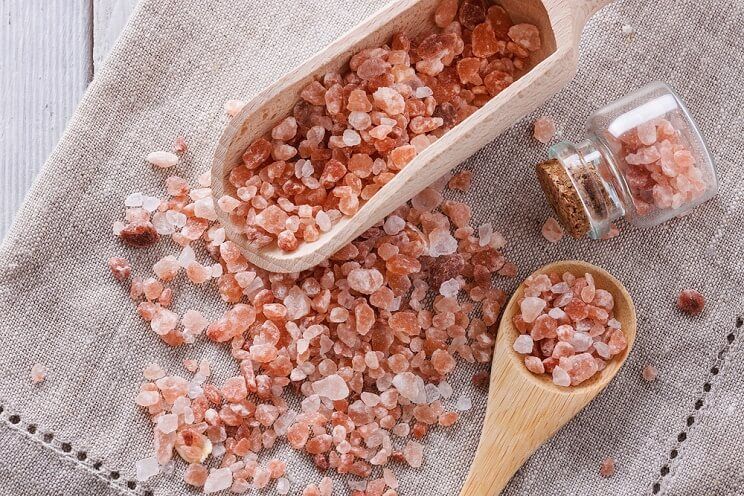 There are different varieties and brands of Himalayan rock salt. Consumers can purchase certified halal or kosher for religious reasons or by type of grind (course or fine). Many brands claim their Himalayan rock salt comes directly from mines in the Himalayan Mountains. People believe this indicates higher quality and greater mineral content. 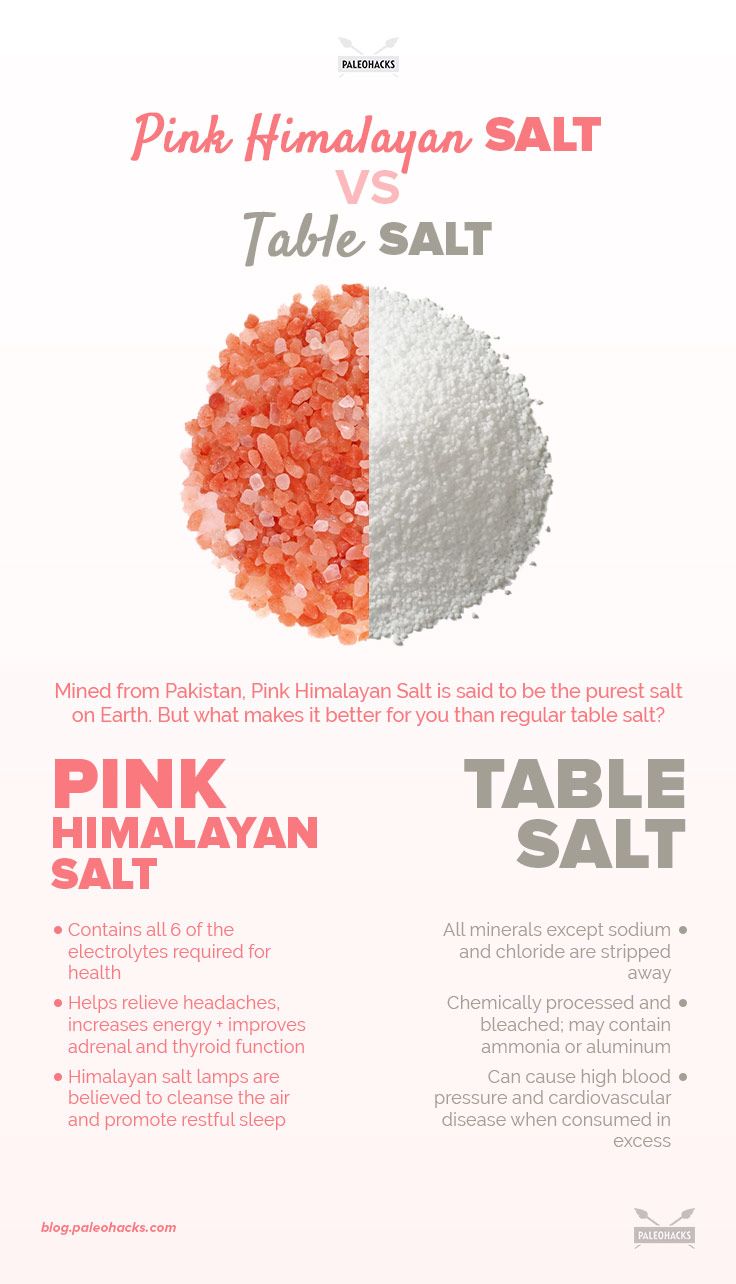 (Read this Next: What Is The Difference Between Cacao VS Cocoa?)