Is It Safe To Eat Fish Post-Fukushima?

The verdict on this post-nuclear disaster.

In March 2011, an earthquake and tsunami led to a massive nuclear disaster in Fukushima, Japan. It lead to the evacuation of more than 160,000 residents of the area, with the radiation exposure resulting in contaminated food supplies.

While this disaster was eight years ago, many wonder if radiation is still contaminating the area and whether or not the food supply is safe. Here’s what happens when you eat contaminated seafood products, and how you can best protect your health.

The Nuclear Disaster in Japan and Food Contamination

In the weeks and months following the nuclear disaster in Japan, the food supply suffered heavy contamination. Many plants, rice, tea leaves, spinach, seafood, and beef were affected, including milk that was taken from the contaminated cows. (1) After Fukushima, contaminated air was the primary way that radioactive toxicity was spread. (2) Animals that ate contaminated plants, like boars and cows, in the immediate aftermath were at risk. (3) Contaminated food was found up to 90 miles away from the disaster site. (4, 5, 6)

In the years following, surrounding countries banned imports from Japan, including seafood, milk, and beef. (7) Elevated levels of radiation were found thousands of miles away, even in California wine in 2018, although not at levels deemed harmful to humans. (8)

The oceanic impact from the Fukushima nuclear disaster was significantly more damaging than even Chernobyl, with peak levels of sea radiation topping out at 100,000 becquerels (the measurement by which radioactive contamination is measured) per cubic meter in Japan. (10) While the radiation didn’t spread beyond the area, it remained grossly elevated for months afterward, leading to continued risks for seafood and food supplies in the surrounding area.

The oceanic impact from the Fukushima nuclear disaster was significantly more damaging than even Chernobyl, with peak levels of sea radiation topping out at 100,000 becquerels (the measurement by which radioactive contamination is measured) per cubic meter in Japan

In 2015, marine seafood from Japan was tested by the National Academy of Sciences in the U.S. as safe to consume, with well-below dangerous levels of radioactive isotopes. Only local, freshwater fish remained at an elevated risk for consumption. (11) Seafood that becomes contaminated from water, like plants, can become contaminated by air since radioactive isotopes and contaminants are transmitted via oxygen.

However, even now, in March 2019, the area is still struggling to rebuild after the nuclear disaster. In one small town that was affected, the former population of more than 17,600 is now less than 900. (12) The residents’ concerns are well-founded, since much of the mountainous and forested areas of the region can’t be decontaminated, and when it rains, nuclear waste re-enters the water supply. Greenpeace reports that the levels of radiation will remain above maximum safety levels for “decades”. (13) The site of the Chernobyl nuclear disaster in Russia in the 1980s still remains uninhabitable to this day. (14)

Fishing resumed after the Japanese disaster, and radiation testing is a now regular part of the safety routine. Fortunately, all tested fish have fallen under the contamination limit since April 2015. (15)

What Happens When You Eat Contaminated Seafood?

Radioactive toxins that are breathed in or taken in from contaminated products can lead to the increased risk of developing cancer in the thyroid or elsewhere. These radioactive particles damage DNA in the body, change the way that cells function, and have cancer-causing effects. (17)

Iodine is a primary component of radioactive waste, which is why a nuclear disaster can have such a dangerous impact on thyroid health.

Bans on eating seafood and other food products were enacted following the nuclear disaster to minimize the intake of these potentially cancer-causing foods. Unless you live in the risk zone after a nuclear disaster, or eat food directly imported from it, it is unlikely that you would eat enough radioactive seafood for it to be problematic. (18) Avoiding food that has any level of radioactivity is impossible, since even bananas have common levels of radiation, more so than most seafood. (19)

What Types of Fish Are Safest? 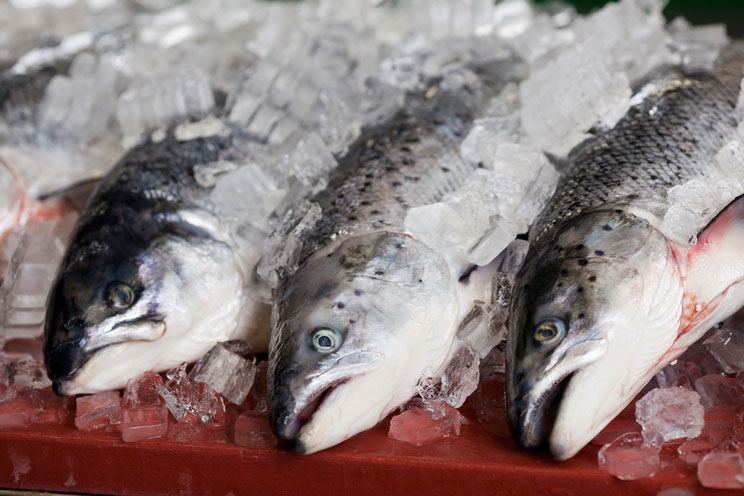 Note: All food has some level of radiation presence. However, it is the concentration that matters. (9) As of 2013, bluefin tuna that were caught in the Pacific Ocean were not at risk of excessive radiation. (20) Beyond that, most fish  tested since Fukushima are not testing above public safety health levels. (21, 22)

The FDA closely monitored radiation levels in fish, especially those imported from Japan in the months and years following the nuclear tragedy. No seafood imported to America was flagged. (23)

The nuclear disaster in Japan was devastating for countless reasons, and it impacted the lives of thousands of people. However, the risk to this day of nuclear- or mercury-contaminated fish from Japan is minimal according to numerous sources and due to regular safety testing.

(Read This Next: Your Favorite Cereal is Probably Full of Glyphosate: Check This List)

7 Butt Exercises You Can Do with Bad Knees – No Squats Needed
Next Post: Lavender Chocolate Coconut Oil CBD Truffles for Better Sleep