7 Health Benefits of Chamomile Essential Oil & How to Use It

There’s nothing like a mug of warm, flowery chamomile tea to end your day on a soothing note. But did you know there’s more to the chamomile flower than its ability to help you relax?

To begin with, you might not be aware that chamomile is one of the most ancient medicinal herbs used by humans. It is also the most documented and widely used plant in the world for its ability to help heal an astounding variety of conditions. (1)

There are two varieties of chamomile: Roman (Chamaemelum nobile) and German (Chamomilla recutita) chamomile, both of which have very similar medicinal characteristics. However, there are slight differences in the compounds that make up each, so you may see Roman chamomile subbed for German chamomile (and vice versa) for different conditions. (2)

Want to train your brain to be happier and healthier?
Click here to receive our FREE 7-Day Meditation Challenge! [tweet_quote] Chamomile essential oil preserves antioxidants in a more stable form than in teas.[/tweet_quote]

While chamomile is often consumed as a tea, the essential oil extracted from its yellow and white flowers may offer even more benefits, since its volatile compounds and antioxidants are preserved in a more stable form. (3)

Here we’ll be delving into these benefits, which will have you not only sipping the sweet tea, but also indulging in chamomile healing oil.

Perhaps one of the reasons chamomile has been such a standout herb throughout history is due to its ability to treat such a wide variety of conditions. From improving digestion to fighting cancer, this potent herbal oil is showing no signs of slacking on benefits.

Chamomile is well known for its ability to relieve many digestion woes, including flatulence, indigestion, colic, diarrhea, and nausea. (4) Researchers believe the anti-inflammatory compound azulene and the antispasmodic anodyne compounds that are abundant in chamomile are the reason behind its beneficial effects. In essence, these compounds help relax the intestines so food can move through smoothly, which results in improved digestion. (5, 6)

Even infants seem to benefit from chamomile’s soothing actions on digestion, with one study showing that 57 percent of its infant participants experienced an elimination of colic within 7 days of consuming chamomile. (7)

It turns out that the same anti-inflammatory compounds in chamomile responsible for soothing tummy troubles are also great for soothing your skin. Studies have found that the inflammation-fighting flavonoids in chamomile essential oil are able to penetrate deep into the inner skin layers to calm inflammatory proteins, as well as fight free radicals that cause aging. (8, 9)

It has also been shown to be 60 percent as effective as hydrocortisone cream in treating eczema, with one study showing “slight superiority” over 0.5% hydrocortisone applications after only two weeks of treatment. (10) 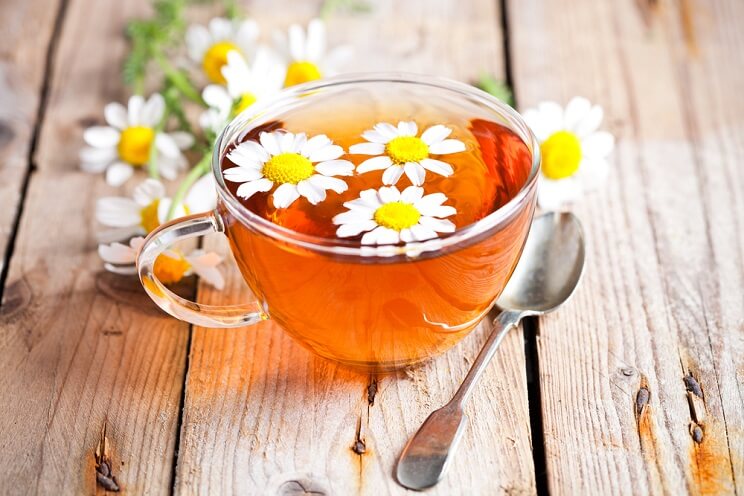 Chamomile contains acetonic extracts that are also beneficial against bacterial and fungal infections. One study showed that the acetonic flower extract of German chamomile had “a higher antimicrobial activity against Staphylococcus aureus (Staph) and Candida albicans than the traditional drugs” when applied topically. (11)

However, another study suggests chamomile may also have the same effect when ingested. It showed that drinking chamomile increased urinary levels of hippurate and glycine, which are associated with increased antibacterial activity. (12)

As you may have seen from the studies above, chamomile essential oil has some pretty potent anti-inflammatory properties. In particular, it contains several volatile oils including alpha-bisabolol, alpha-bisabolol oxides A & B, and matricin, which convert to flavonoids that help inhibit inflammatory proteins. (13)

This makes chamomile excellent for treating inflammatory skin conditions, such as eczema, as well as inflammatory digestive disorders and even arthritis. (14, 15)

Chamomile is probably most widely known for its calming properties. It contains several compounds that have a sedative effect on the body whether consumed or inhaled, and patients have reported falling into a deep sleep after consuming it as a tea. (16)

Chamomile also has a calming and antispasmodic effect on the central nervous system, making it excellent for promoting relaxation. Researchers believe these effects are due to a compound in chamomile called apigenin, which can bind to GABA receptors in the brain to produce a sedative effect. (17) 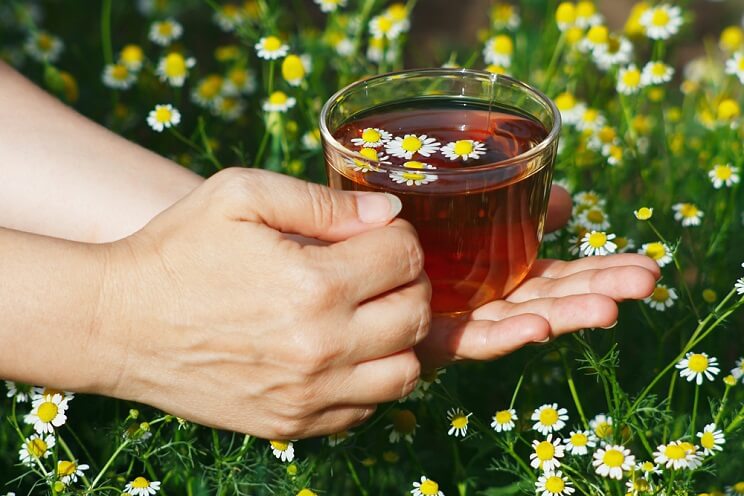 Both the Roman and German chamomile essential oils contain potent antioxidants in the form of terpenoids and flavonoids. These compounds, including oxide azulenes, apigenin, patuletin and quercetin, act as free radical scavengers in your body. (19)

Essentially, free radicals are pesky compounds that result in DNA damage in your body, which then leads to aging skin and a lowered immune system, among other nasty effects. Antioxidants help remedy this damage by stopping these compounds before they can cause damage, which will ultimately result in less wear and tear on your body. 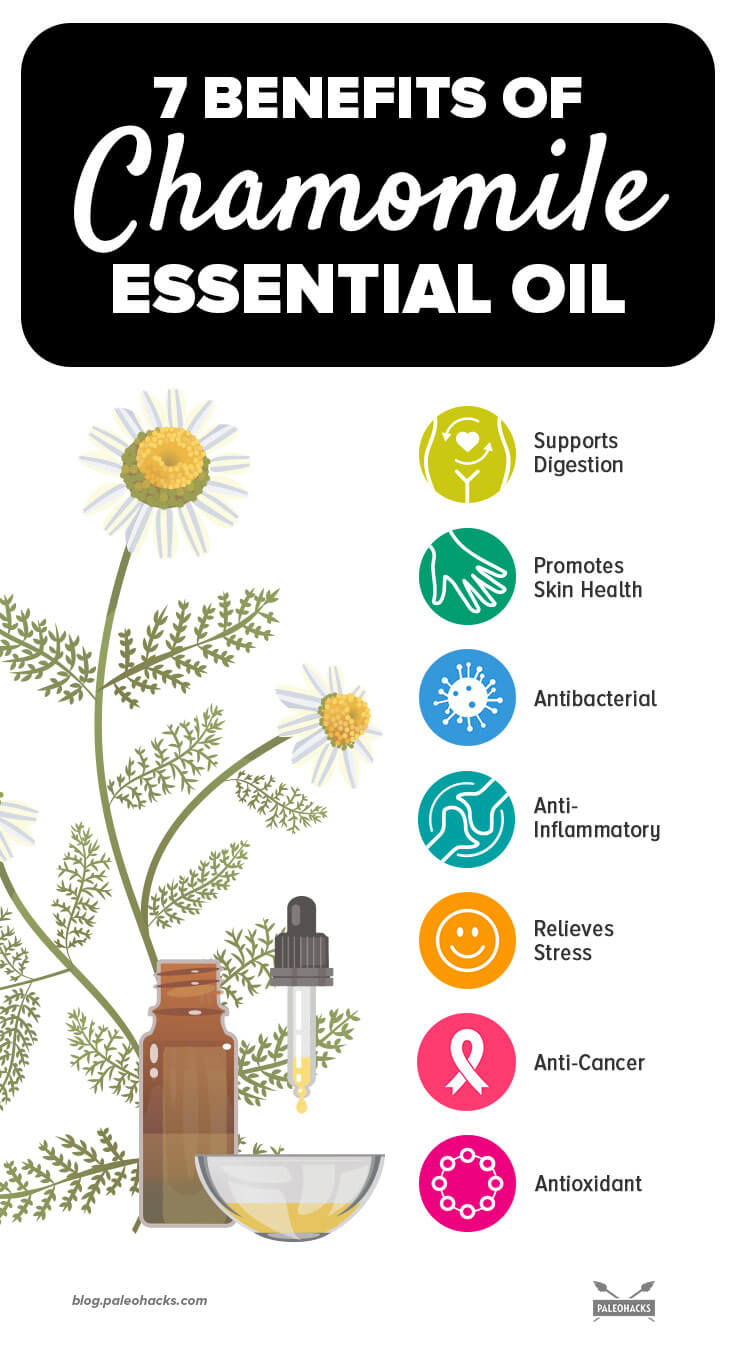 How to Use Chamomile Essential Oil

You can find chamomile essential oil in almost any health food store or online. It can be used topically or internally, and can even be inhaled, depending on what you’re using it for. Some suggestions: 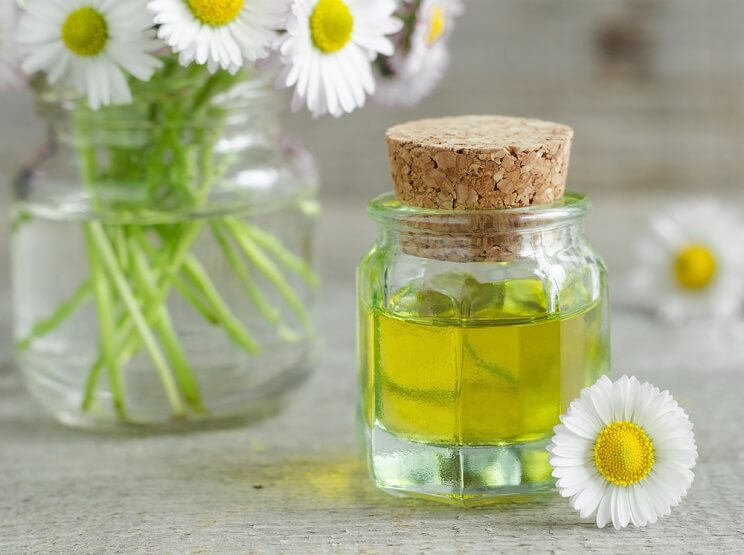 Note: The only precaution to using chamomile essential oil is if you’re pregnant. Studies show it increases blood flow to the pelvic area.

While brewing a batch of chamomile tea is indeed a healthy and soothing practice, don’t be afraid to experiment with the essential oil. Even if you’re perfectly healthy, you can still turn your home into a soothing oasis by diffusing chamomile before bedtime. Or, perhaps you can make your day at the office less stressful by carrying a bottle with you.

Above all, when you purchase chamomile essential oil, make sure you buy from a reputable brand that sells only 100 percent pure oils.

(Read This Next: Geranium Oil: Benefits for Glowing Skin & Uses)